This impressive, unnumbered, ebony, month-going longcase clock by Thomas Tompion has exceptional gilt brass mounts to its hood and case and shows a number of features which suggest that Joseph Knibb collaborated in its design and, possibly, in its construction. The clock is one of only two Tompion clocks to use Knibb’s Roman striking system (the other being a highly complicated boxwood night clock) although Tompion has used the conventional IIII on the chapter ring rather than the IV preferred by Knibb. The skeletonised dial is also very typical of Knibb (see Exhibit 101). The swag mounts on the hood of this clock are also to be found on a month-going Roman striking longcase by Knibb as well as other clocks by Tompion including the astrolabe clock in the Fitzwilliam Museum, Cambridge. 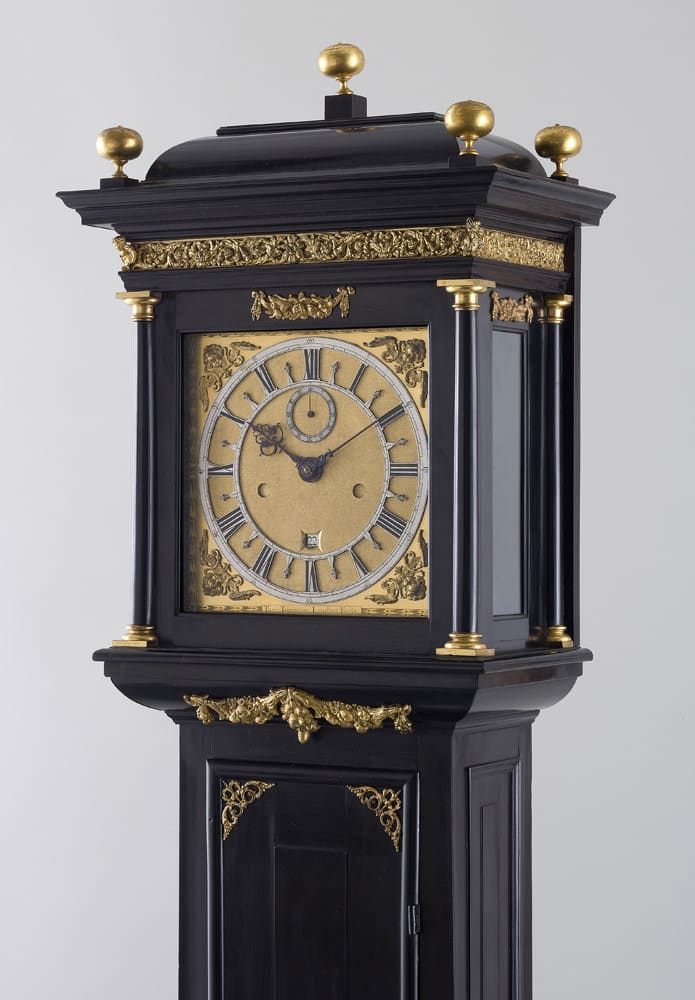 Coach-watch, N067, with with three rings for calendar, hours and alarm.

c1681 was early in Thomas Tompion’s career when he signed this three train hour striking silver pair cased small coach-watch, N067, with with three rings for calendar, hours and alarm. Whereas both Fromanteel in Southwark and East in Ram Yard circumvented the Clockmakers Company by operating workshops in locations outside City of London, Tompion managed to avoid these constraints by using outworkers. His greatest achievement was control of quality in his production of some 5000 watches and 600 clocks using subcontracted parts.
He so dominated the market of his day that a watch became known as a Tompion, just as today a vacuum cleaner is a Hoover. Just imagine the prestige a gentleman must have felt when this Tompion alarm went off, perhaps exclaiming ‘Ah yes, time to go to see my banker!’ 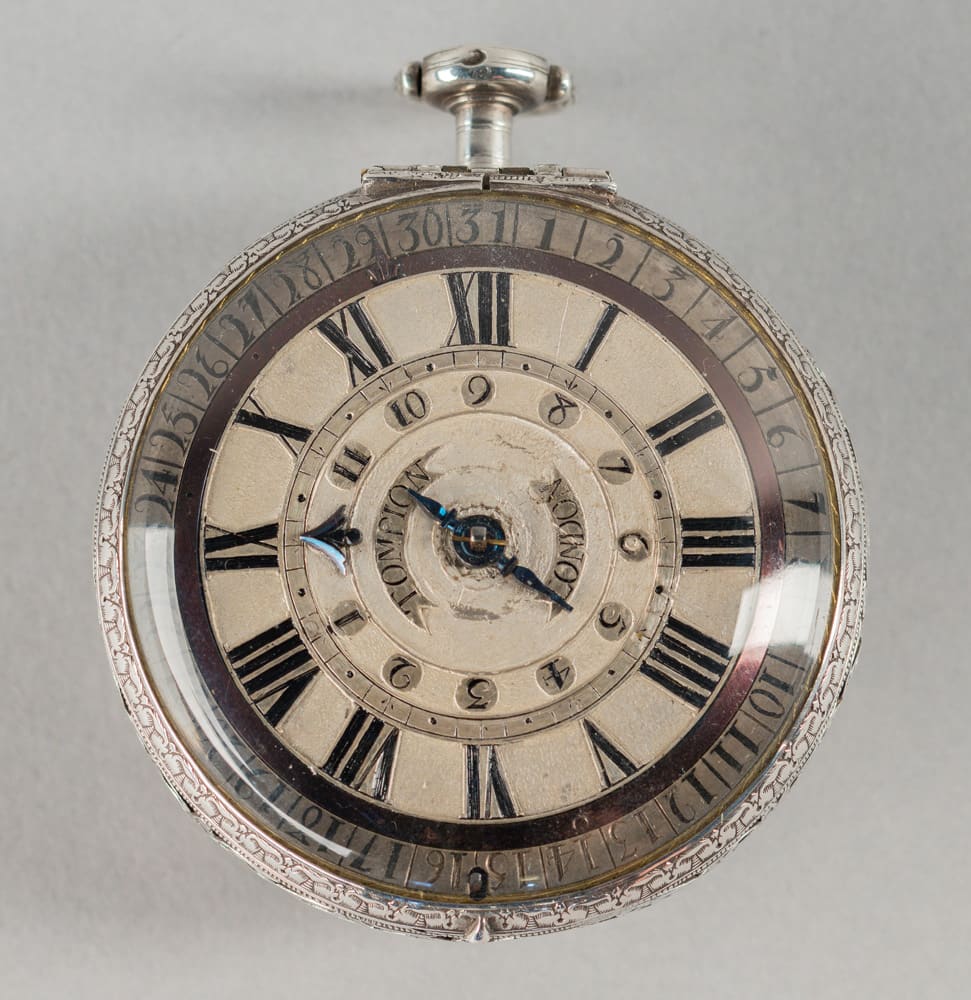 John Knibb large full quarter striking lantern clock. The lantern clock by William Bowyer (Exhibit 9) dated 1636 has a formidable strike train and also an alarm function. John Knibb here goes one better by including full quarter striking on each quarter as well as the fourth quarter on each hour. The hour bell creates a ring to compete with that on the Bowyer and is unlikely to be missed! To give sufficient drop for the weights for a full 24 hour duration requires the clock to be mounted high up on the wall.
It is easy to assume that John’s long pendulum beats seconds. However, the pendulum beats 64 swings each minute. The going train gear ratios are altered to ensure the minute hand revolves once every 60 minutes. 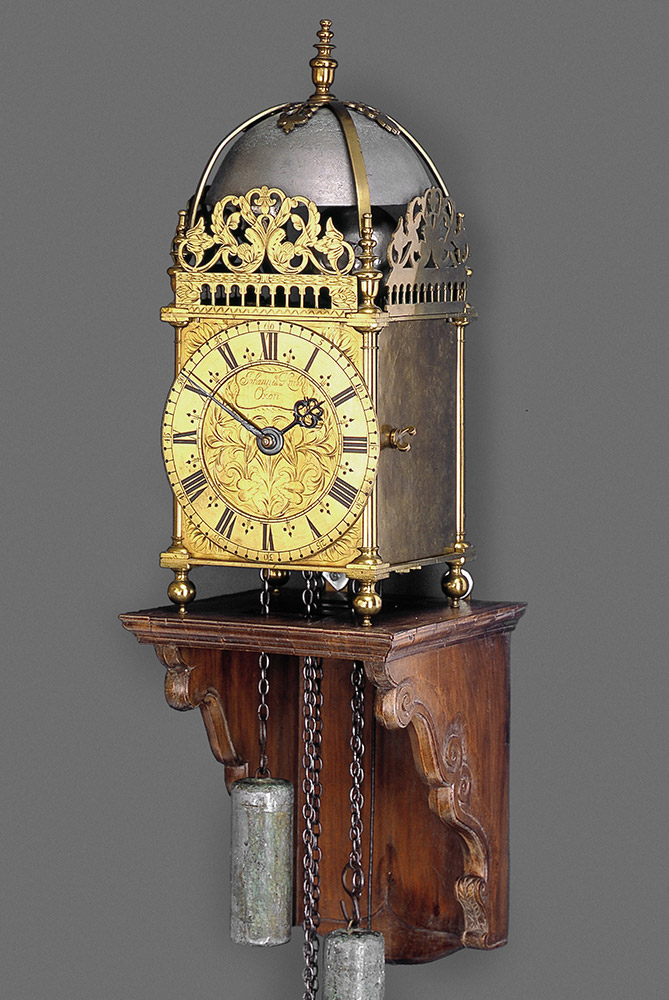 After setting up shop on his own account in 1671, it seems to have taken time for Tompion’s business to have prospered. Meanwhile, he must have continued in his former role of underworker to established clockmakers, such as the Fromanteels and Joseph Knibb.
This clock shows Tompion’s collaboration with other makers prior to c1680, while the spandrels and pin-set date square are distinct to him, the main case is of a style more usually associated with Knibb cases and the movement has features often linked with Henry Jones. 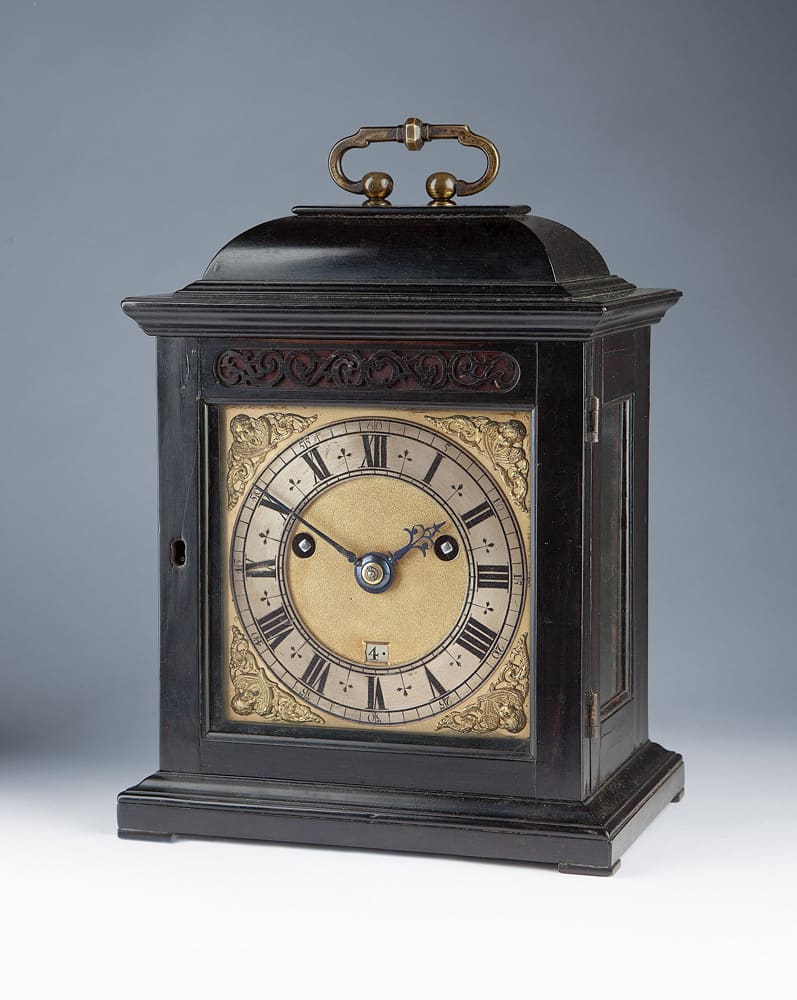 Dated 1677 Joseph Knibb small silver-mounted roman striking black velvet dial ebony veneered table clock with tic-tac escapement is one of the most attractive ever produced. The solid silver chapter ring and delicate silver hands are balanced by the black velvet dial and the central pierced silver foliate disc surmounted with the signature Joseph Knibb Londini Fecit. The backplate is engraved Joseph Knibb Londini Inventit and Fecit Anno Domini 1677, likely referring to Roman striking Phase II.
The four vase finials were thought to be Victorian but recent tests by the Goldsmiths’ Company show they could be original. This little clock has an impressive pedigree.
It was part of King George III’s collection and presented to his surgeon, Thomas Beckett, remaining in the Beckett family until sold by his great grandson through Bobinet to the collection of the watchmaker George Daniels. 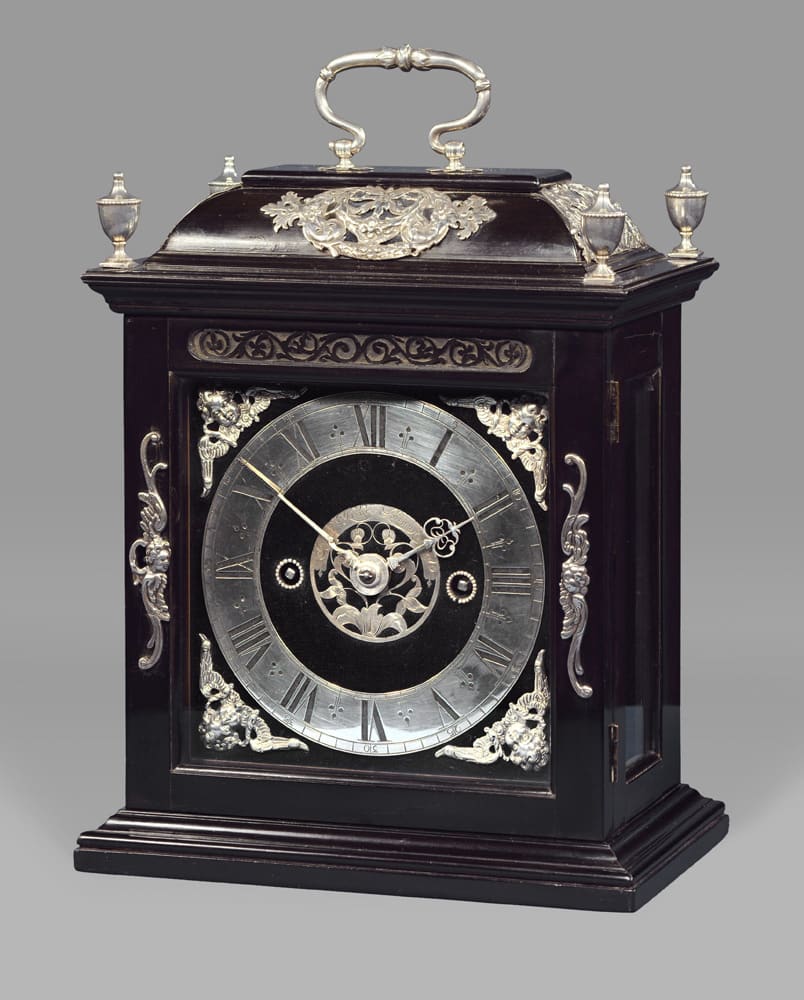 Joseph Knibb silver mounted velvet dial grande sonnerie table clock with silver dial, mounts, handle, spandrels & escutcheons particularly associated with Knibb. Floral ebony side frets backed by red silk heightens the bell sound. This clock is signed on a silver engraved and pierced central central disc, Joseph Knibb London. The velvet surrounding the date aperture and three winding holes is protected by silver grommets. The backplate is covered in sweeping symmetrical pierced floral and foliage engraving with the two countwheels engraved with multi-petal flower heads. The hour bell is a low pork pie shape; the escapement is a tic-tac, both favourite constructions of Joseph.
This clock is one of earliest of Joseph Knibb’s so called Phase II spring clocks and has been much written about over the years. 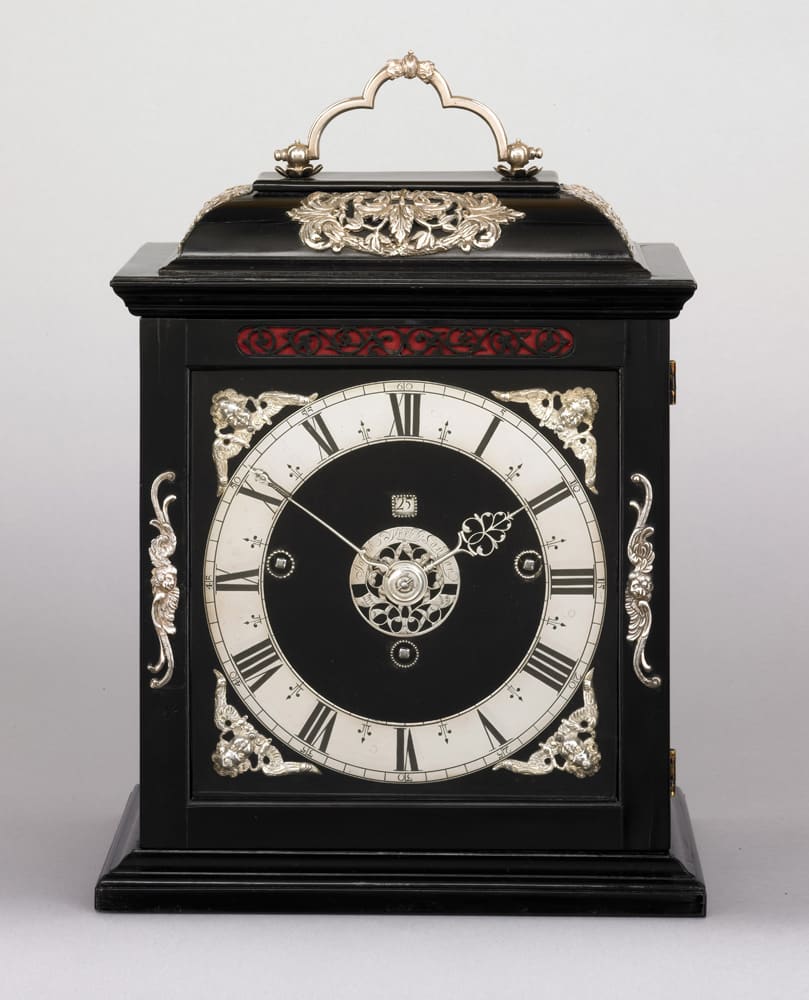 Joseph Knibb made this spring clock in London in what is called his Phase II style. These clocks all have velvet covered dials, solid silver-faced chapter rings and silver spandrels and mounts. Mechanically they are all different however. There are believed to be less than ten Phase II clocks that have survived and three of these are in this exhibition. This example uses rack-and-snail hour striking, allowing for the inclusion of pull-quarter repeat work. 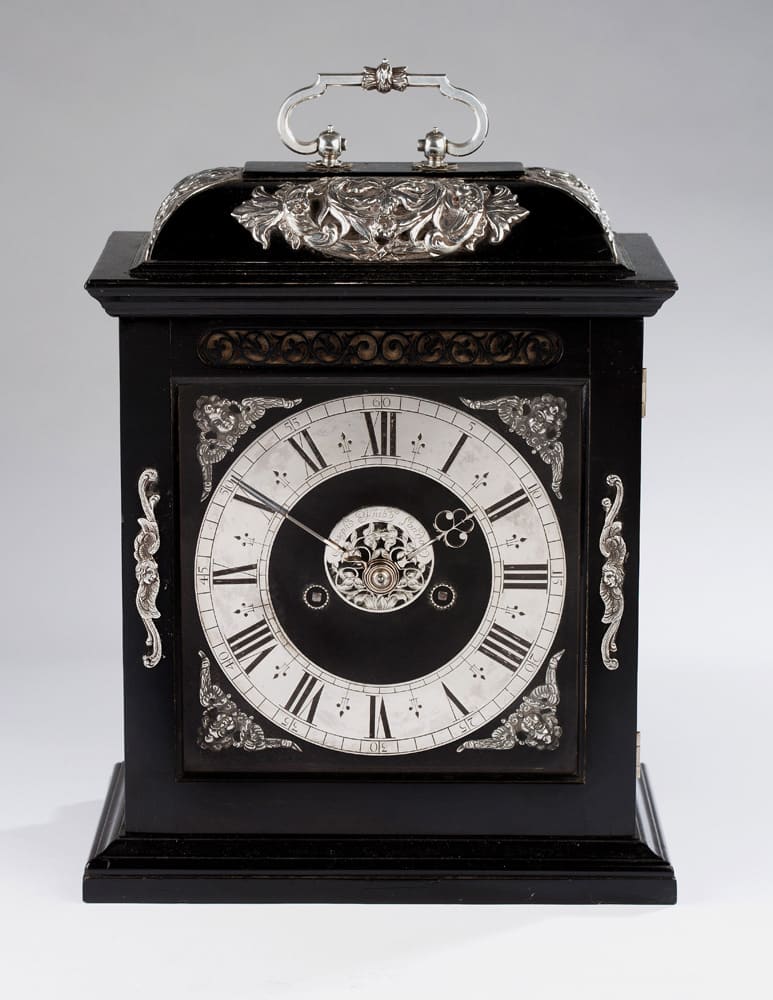 Tompion lantern clock. The organisational ability of Thomas Tompion enabled him to manufacture anything using outworkers. There was a clock market from royalty through the aristocracy and gentry to the humble householder. Each sector had a price point and Tompion supplied clocks and watches to fill the complete range of demand. The rules of the Worshipful Company of Clockmakers limited the numbers of direct employees and apprentices but were powerless to interfere with outworkers. Thus, humble lantern clocks were produced and sold as part of his range.
Early continental domestic clocks had been made of wrought iron since the 1500s (Exhibit 1), but English lantern clocks were introduced in the early 1600s (Exhibit 3) made from brass castings. This construction was much simpler to produce and continued virtually unchanged for 300 years. 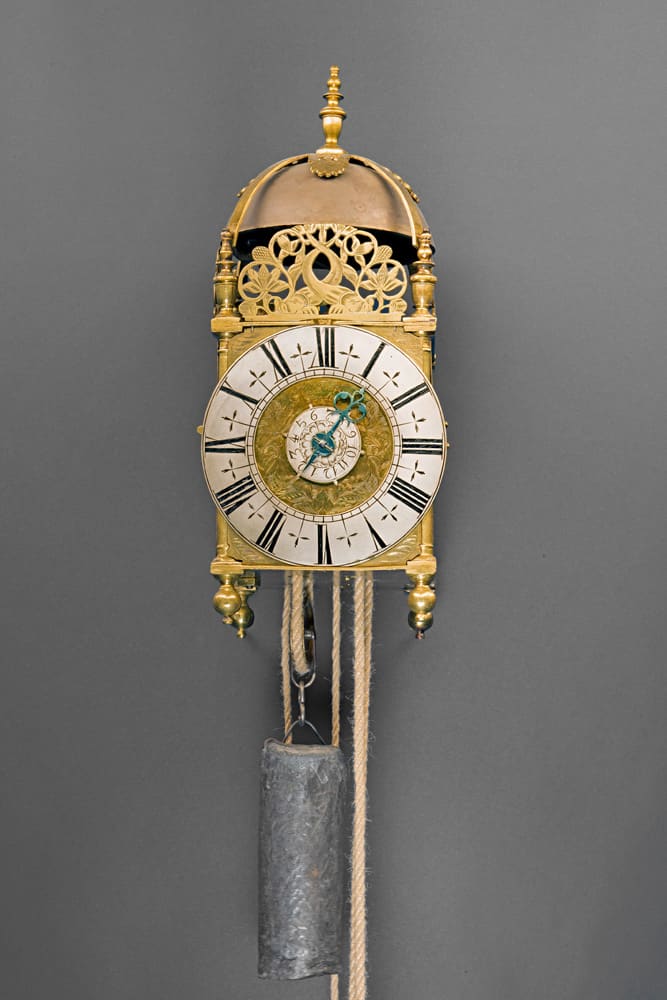 The charming little John Knibb Oxford wall timepiece has a 30 hour movement with a verge escapement and a short bob pendulum. The alarm is set to sound time against a small silvered alarm disc in the centre of the dial. Costs are kept down with floral engraved corners on the dial rather than the usual cast and gilded cherub spandrels. The little movement has turned baluster pillars and is set on a simple walnut wall bracket.
Whereas there were few clockmakers in Oxford during the Civil War and under Cromwell, after the restoration of Charles II, clockmaking flourished. John Knibb was apprentice to his elder brother Joseph in Oxford from about 1664 and continued to run the Oxford workshop when Joseph went to London. John prospered in Oxford, being elected Mayor in 1698 and again in 1710. He died in 1722 aged 72. 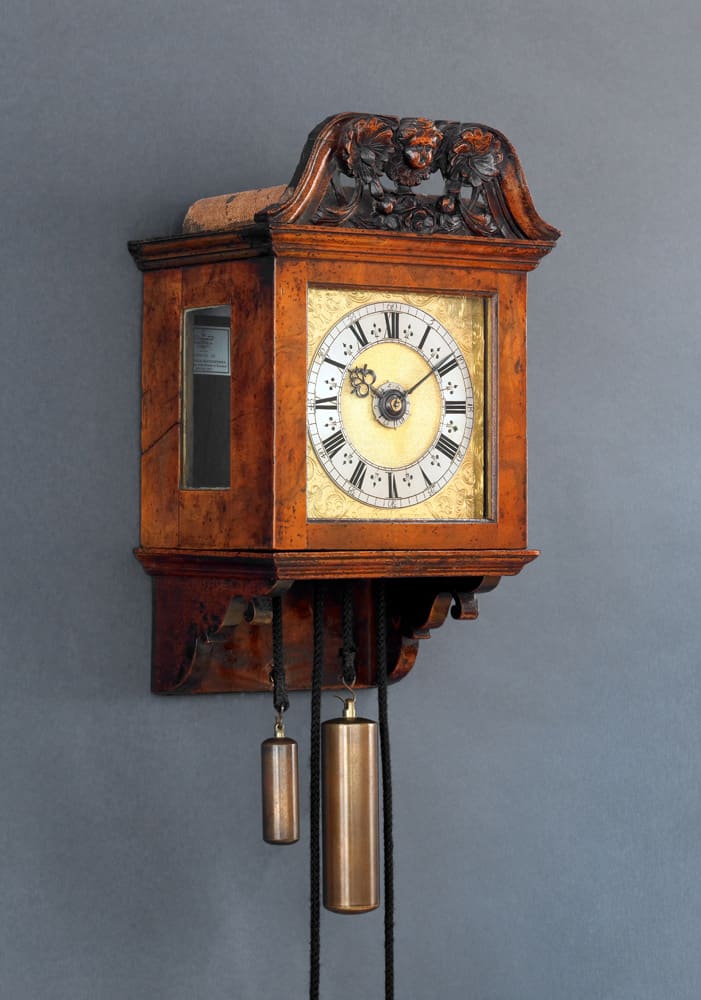 This diminutive oyster veneered olivewood Joseph Knibb floral marquetry longcase is just a perfect holistic creation. Though only 5ft (1.6m) high, the narrow case still houses a seconds pendulum impulsed by an anchor escapement. The hour striking movement is of a full 8 day duration.
The original colours of the flowers in the marquetry must have been stunning.
The leaves are cut from bone, stained with copper sulphate to a lovely spring green colour. As this is a natural mineral colouration, the hue has not faded. In contrast, the flowers are wood veneer, stained with vegetable dyes. Ultra-violet light has bleached all the colour away over the third-of-a-millenium since the case was finished. 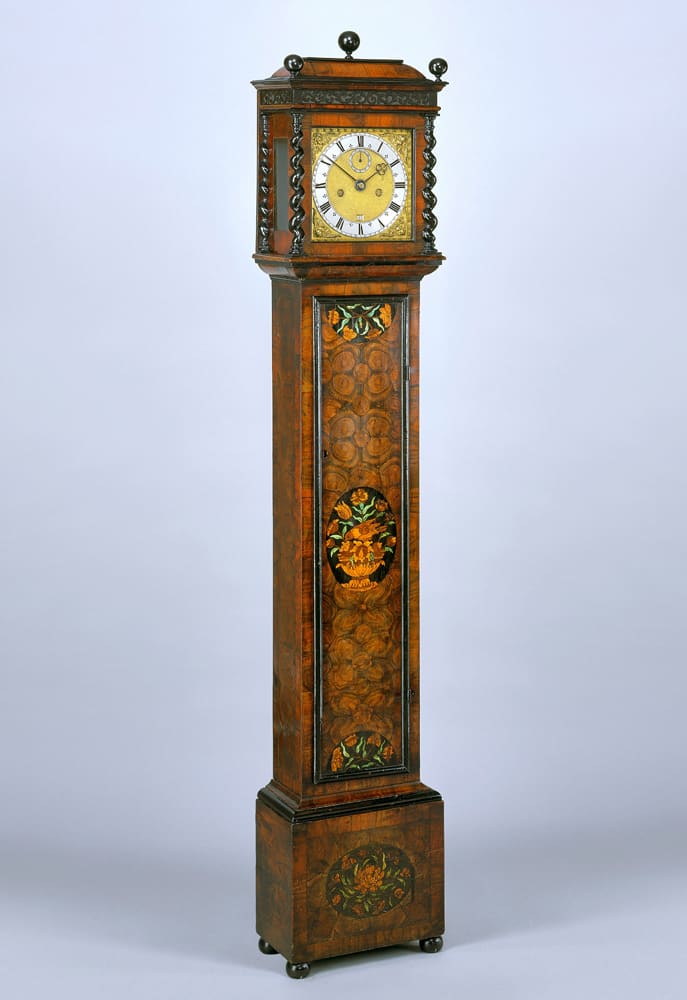