This spring clock is signed on the backplate by Henry (Henricus) Jones and is in a distinctive flat-topped walnut veneered case (see also Exhibit 70) which is transitional between the early pedimented architectural style and the more elaborate caddy-topped cases that became fashionable later. The backplate is boldly engraved with a spray of tulips emanating from the left side and spreading around the countwheel. 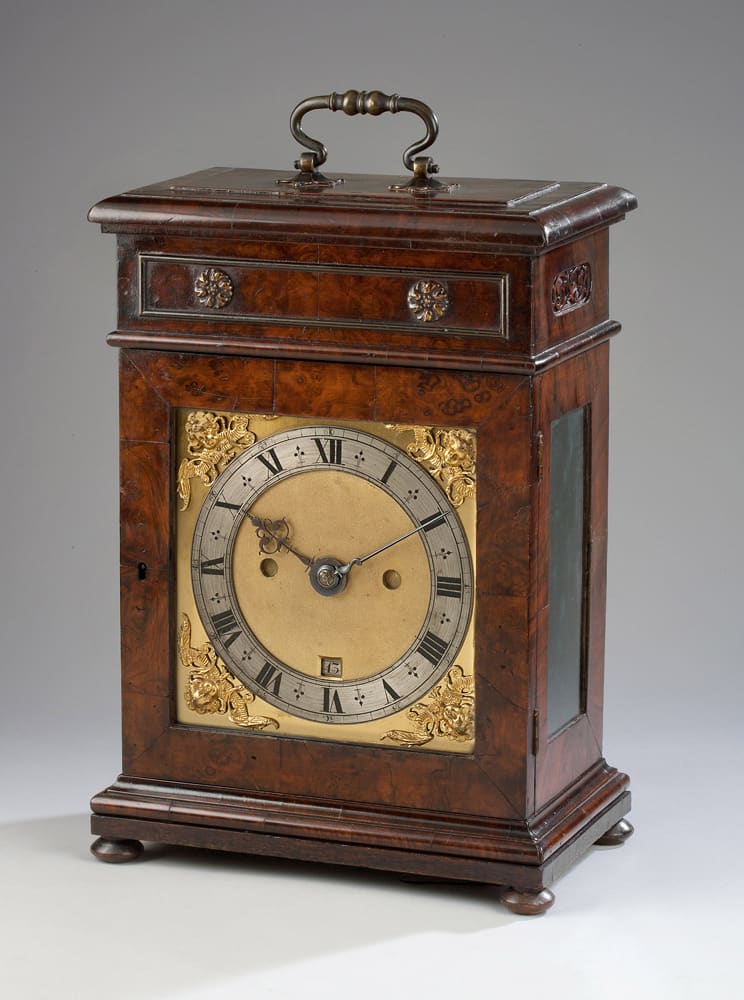 This spring clock by Joseph Knibb is of a so-called Phase 1 design with its distinctive handle on top of an ebony veneered case. About twenty of these clocks are known to exist and, although they all share the same basic case style, they are often mechanically quite different. This example has a tic-tac escapement and strikes the hours using Knibb’s Roman striking system using two bells. Knibb always used the Roman IV on the chapter ring instead of the more usual IIII on his Roman striking clocks, so look out for other examples elsewhere in the exhibition. 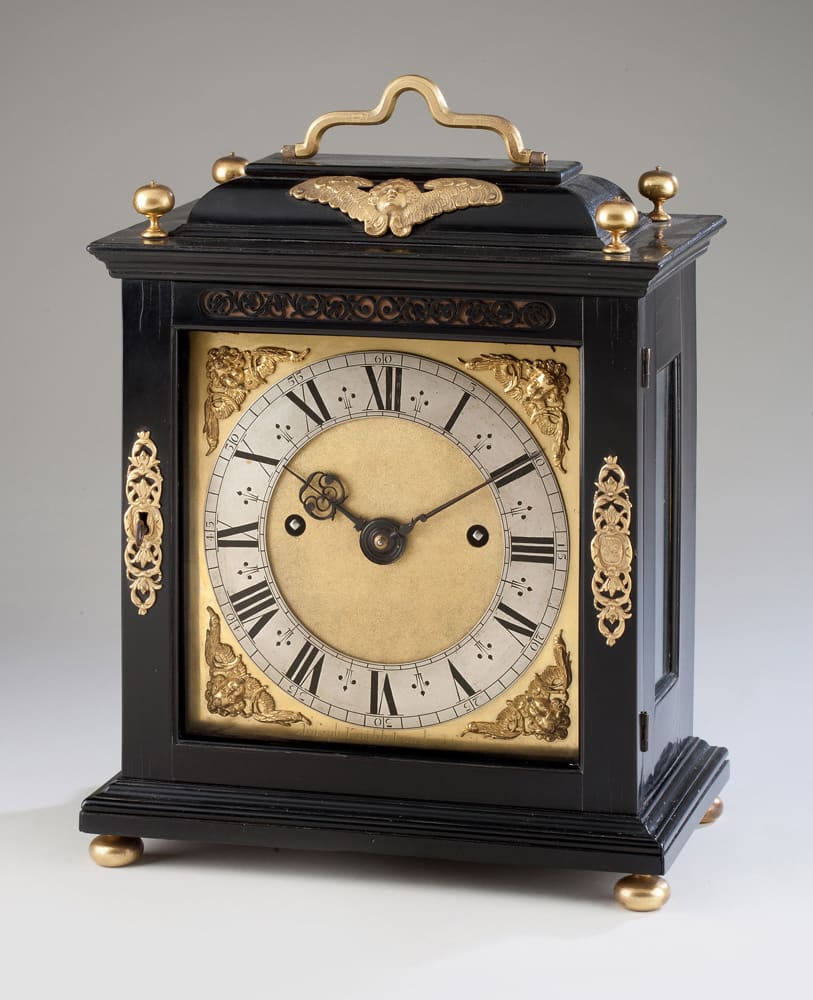 This small ebony, timepiece spring clock is by Joseph Knibb and has a dial wonderfully engraved with a vase containing tulips and other flowers. Since it does not strike, this clock has only one train and needs only one winding hole. The engraver has however, left a space in his design for a second hole if needed! The movement has very unusual A-shaped plates and the back plate is engraved with another boldly rendered vase filled with flowers. It is perhaps one of the earliest of Joseph Knibb’s so called Phase III cases. 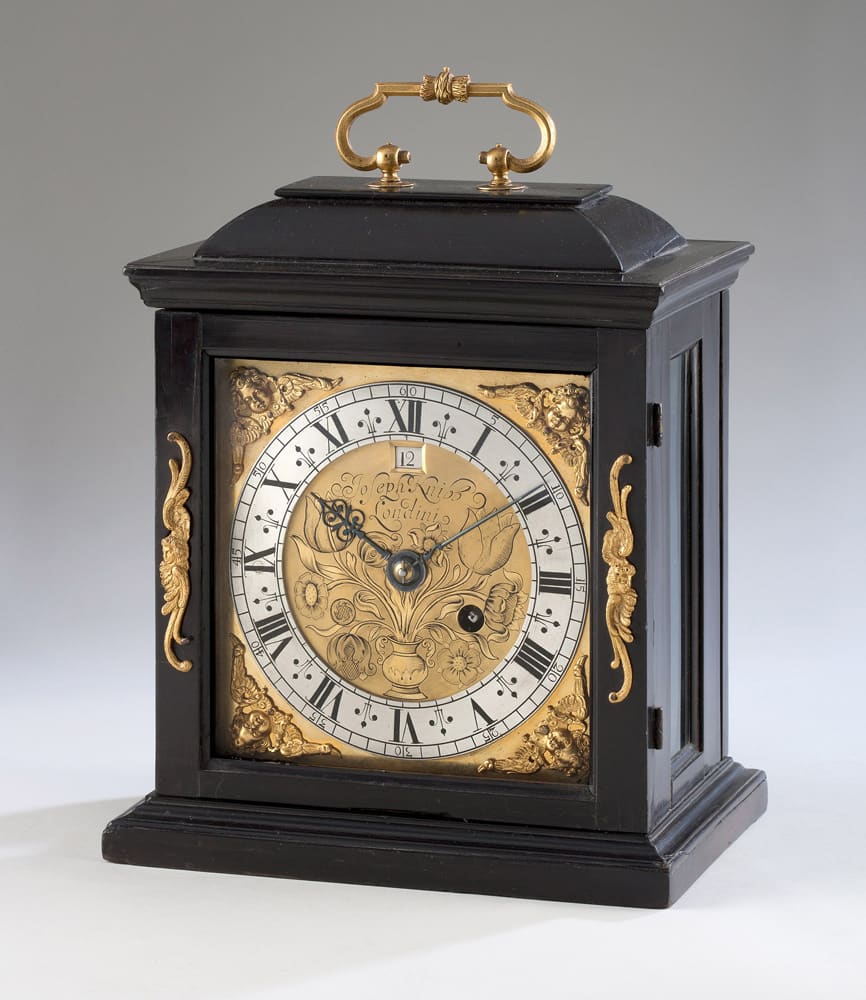 Henry Jones skeletonised chapter ring parquetry 8 day longcase with a crested hood. Early production by Henry Jones is usually of the highest quality and this fine clock certainly conforms with that accolade. Skeleton chapter rings are difficult to make so they commanded a high price and only appear on the best quality clocks. The hood is graced by a fine walnut carved cresting and the early parquetry and glass lenticle glow against the surrounding olivewood oysters. 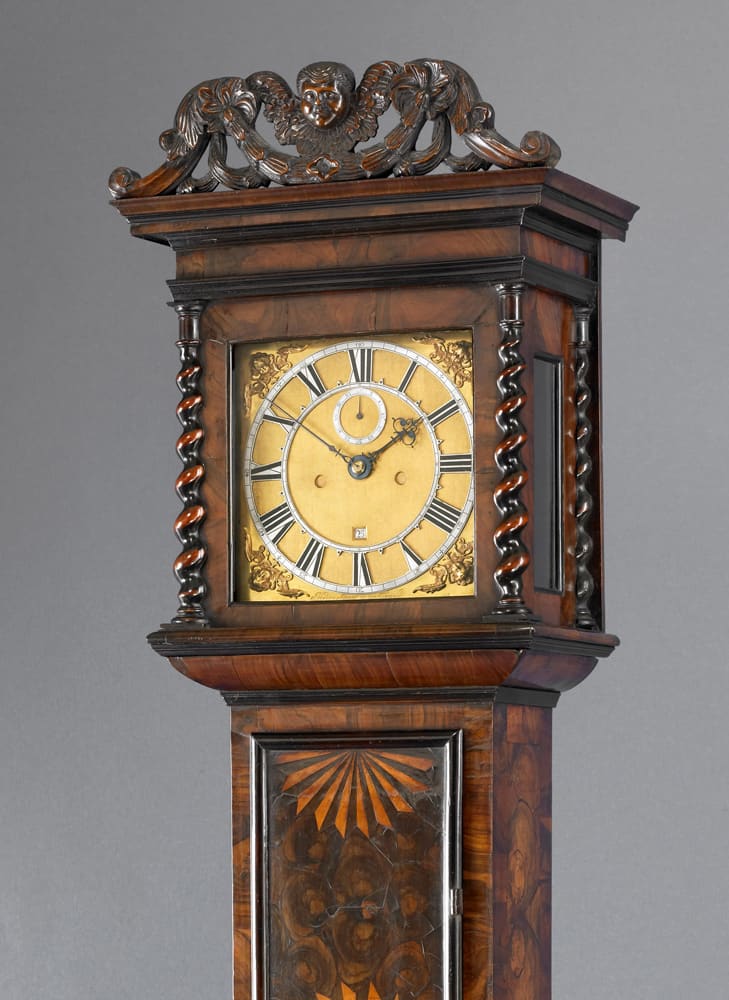 It is rare to find a third-of-a-millenium-old clock in virtually original condition, but this John Knibb month going parquetry longcase is just that. It is a fine example of John Knibb Oxford’s work, particularly the detailing in the hands, the Oxford shapes, subtly different to Joseph’s production in London.
The black ebony clockcases, coming from the Cromwellian and Puritan view of the world, had slowly given way with the introduction of walnut and olivewood veneers as the restored Stuart monarchy of Charles II tried to move on from the past. Now was the time to introduce something new again – a parquetry and floral panelled case.
Marketing has changed little in 350 years. In every age it is necessary to move the market forward – this veneering on the case is a new look to do just that! 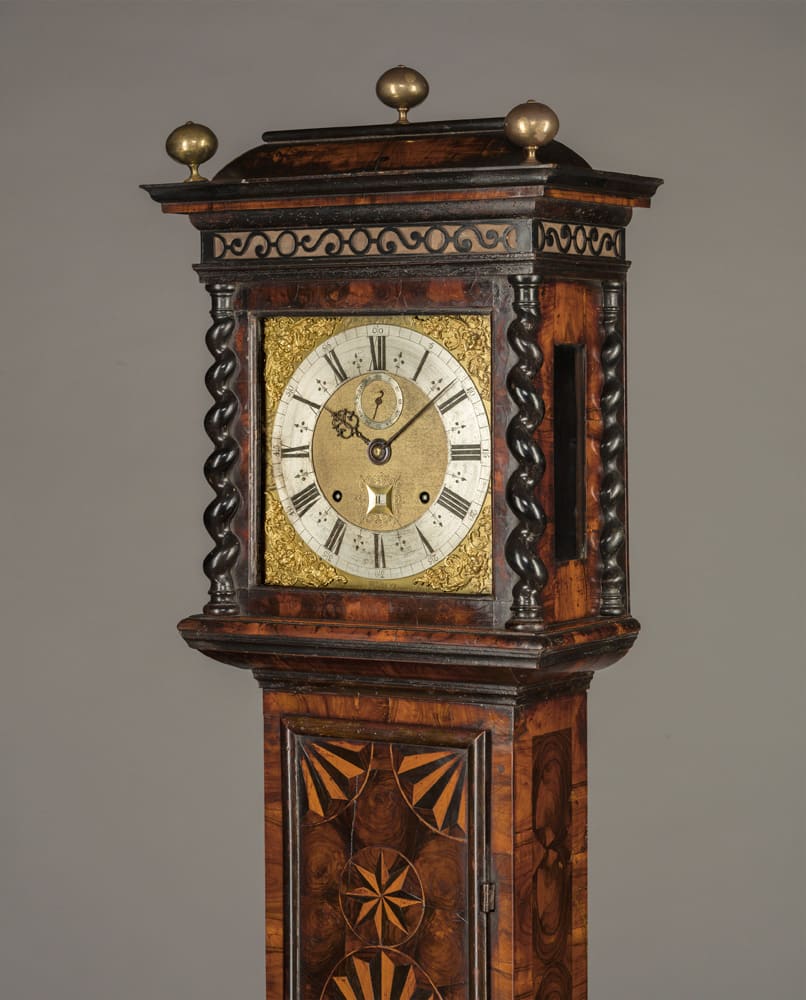 Joseph Knibb with skeletonised chapter ring and calendar in a parquetry and floral longcase from the Wetherfield Collection. The highest quality month-going movement has a rating adjustment butterfly above the pendulum support cock. It is surprising that the movement has no maintaining power to prevent the hands stopping or even running backwards, whilst the clock has its monthly winding. Perhaps this optional extra was the stopping point for the new owner’s purse. Or with the calendar in the place of a second hand, perhaps Joseph thought the owner would not notice.
1675 was a difficult déjà vu year for King Charles II. The king suspended Parliament after only nine weeks sitting because they refused to vote him any funds. Then political discussions were taking place in the new coffeehouses, causing the king to issue a Proclamation for the suppression of coffeehouses! 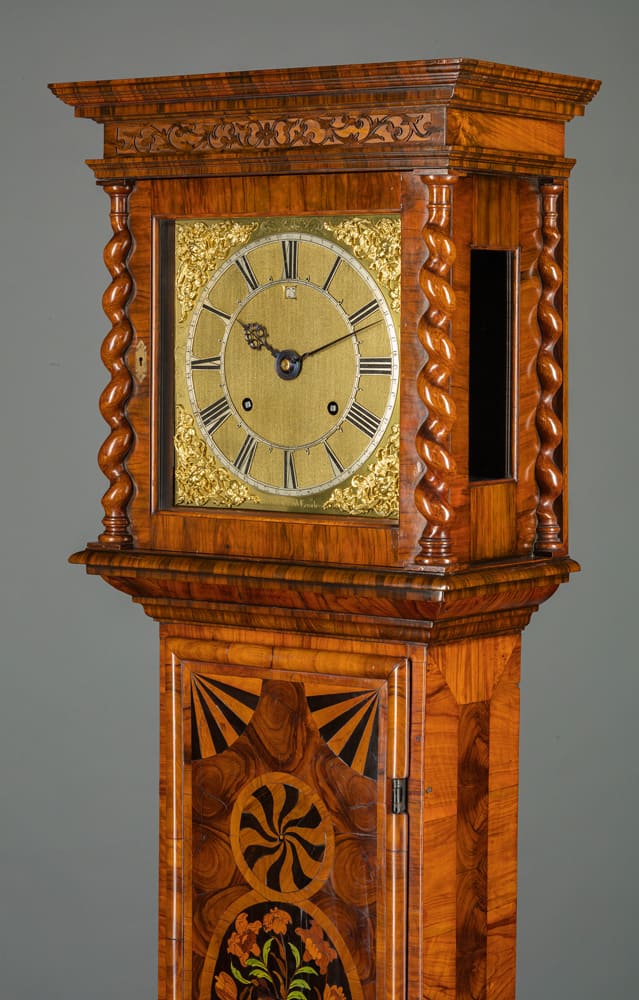 After the introduction of a dial to regulate the short pendulum on the Fromanteel musical clock (Exhibit 38), this month duration John Fromanteel longcase has a side regulation dial to adjust a 5ft long 11⁄4 seconds pendulum.
The upper seconds dial has only four divisions each 5 second engraving, in contrast to the usual five divisions for a true second pendulum. John Fromanteel appears to have an interest in 11⁄4 second pendulums. It was assumed that the longer the period, the more accurate the time keeping, but on experience this proved illusory. The mainstream of clock sales became the true one second pendulum with seconds dial – the 11⁄4 seconds pendulum dial was confusing! Most Ahasuerus and John Fromanteel longcase clocks are of 8-day duration. This month going John clock is unusual. 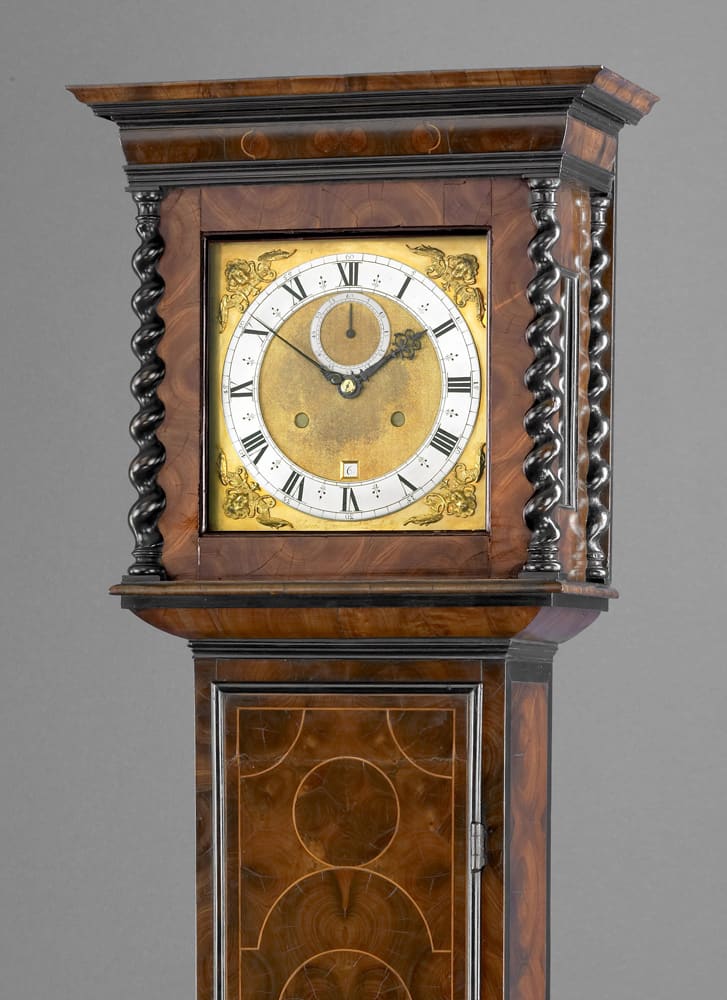 John Fromanteel presented a clock virtually identical to this grand quarter striking walnut veneered longcase clock to Austin Friars Dutch Church in London – the World’s oldest Dutch Reform church. In 1499, Perkin Warbeck was executed and buried in the Church after pretending to be Prince Richard, one of the Princes reportedly murdered in the Tower.
John was baptised there in 1638 as this was the family church of his father, Ahasuerus Fromanteel, after he came to London from Norwich in 1631.
This Medieval Church was completely destroyed in the Blitz on the night of 15th October 1940. The very day before the bombing, all of the Church’s historic Bibles and atlases had been removed to safety outside of London. John’s clock, screwed upright to the church wall, remained to perish in the destruction. 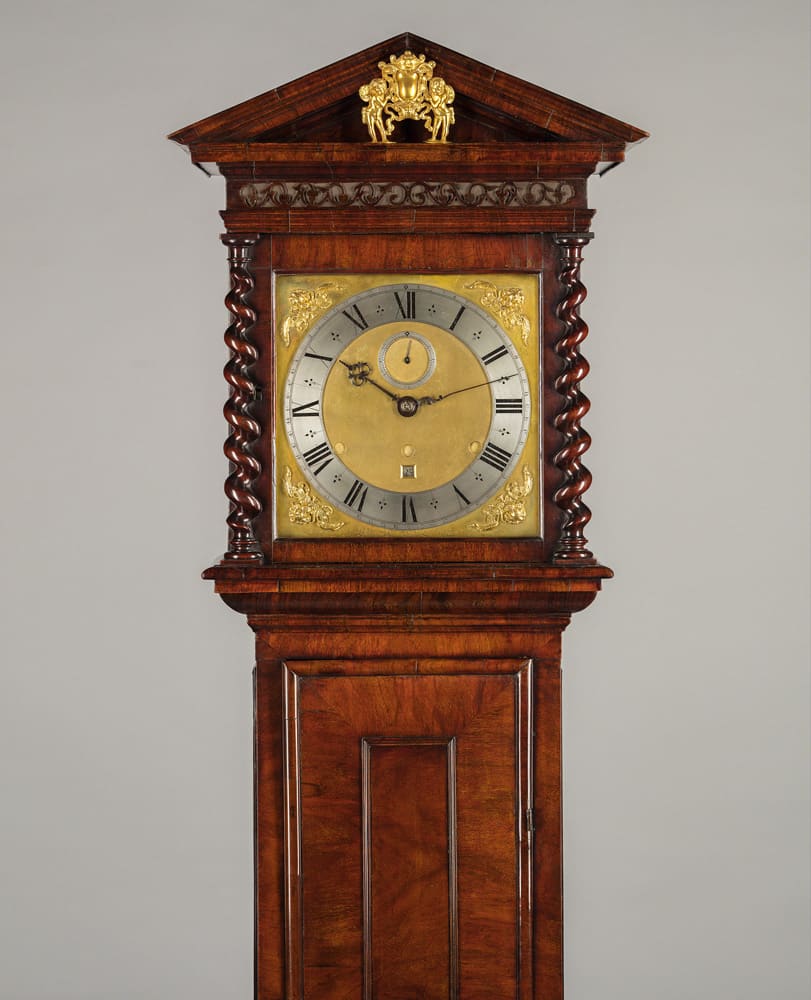 The simple elegance of Joseph Knibb’s production is personified in this two train longcase. His brother John’s three train quarter striking is straightforward to understand – the quarter train is on the IX side, going train in the middle and the hour train in the III side. But here Joseph’s two-train quarter striking has a single combined strike train on the IX side controlled by a large diameter countwheel, set out alternately with identical spaced sections for the quarters interspaced by increasingly longer sections for the 1-12 hours. A sliding pump piece then engages the correct bell hammer tail to sound first the hour on the large low bell, then sliding across to engage the hour bell hammer tail to strike the hour.
Unusually, the sound fret is let into the door head rather than the hood cornice. 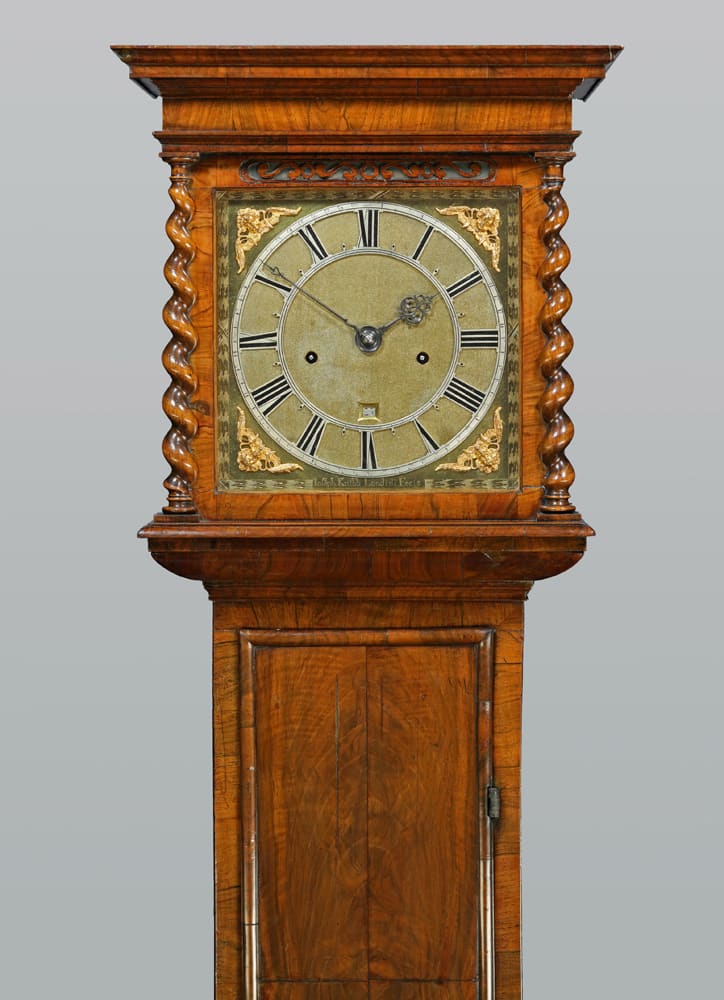 Peter Knibb, London. Peter Knibb is the most shadowy member of the Knibb family. Having been apprenticed in 1662, in 1679 he left London for his birthplace, Farnborough in Warwickshire and there are only two clocks known signed by him. However, both (this longcase and a spring clock) are fully up to the highest standard of his cousin, Joseph, to whom he was apprenticed. In fact, this example exceeds others in Joseph’s series (see exhibit 100) with full hour strike, rather than power saving Roman strike, and a skeletonised chapter ring.
This clock runs for three months, and knowing the date Peter left London, is a useful pointer for dating similar clocks by Joseph. 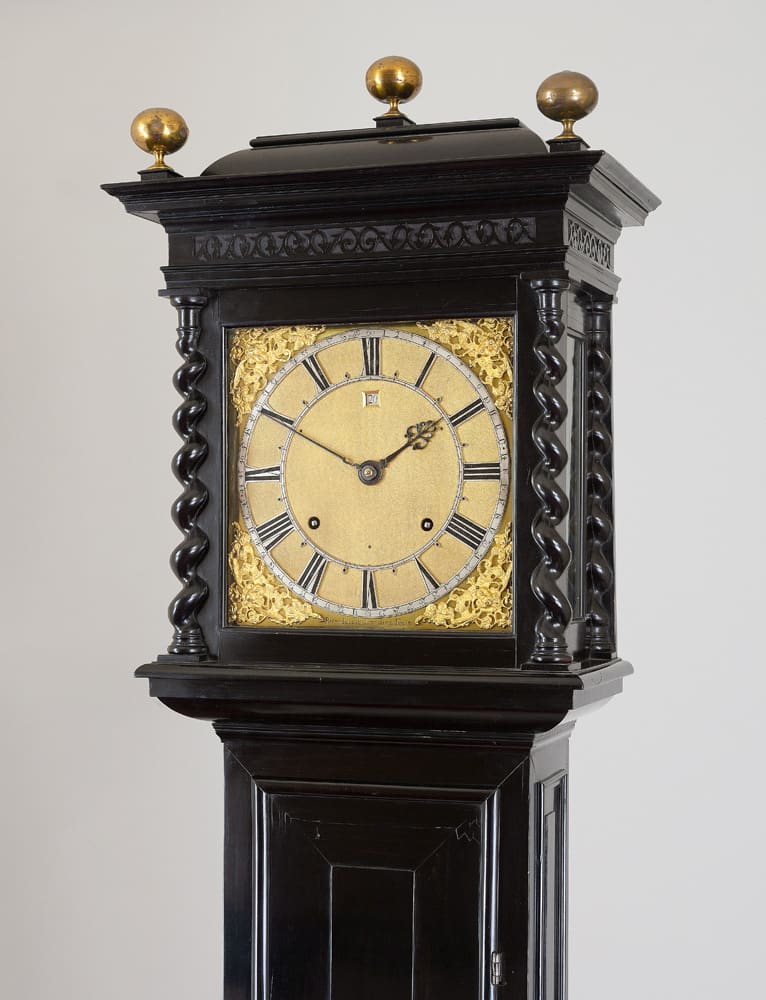