Painted below the dial are Arms of the Dukes of Wurttemburg and one other. The whole frame and wheel mechanism is made from wrought iron. All the parts have been made by a Master Blacksmith, even the elegant cross flower finials to the frames are forged from red hot steel on an anvil. The four corner buttress frames when set side by side are identical to within ¼mm – how was this possible? The top and bottom plates click into place with the vertical movement plates within the four frames and the whole assembly is held rigidly together with one taper pin! It is easy to dismiss this clock and the way it was made over 500 years ago. But it is also one of the earliest clocks ever with quarter striking! 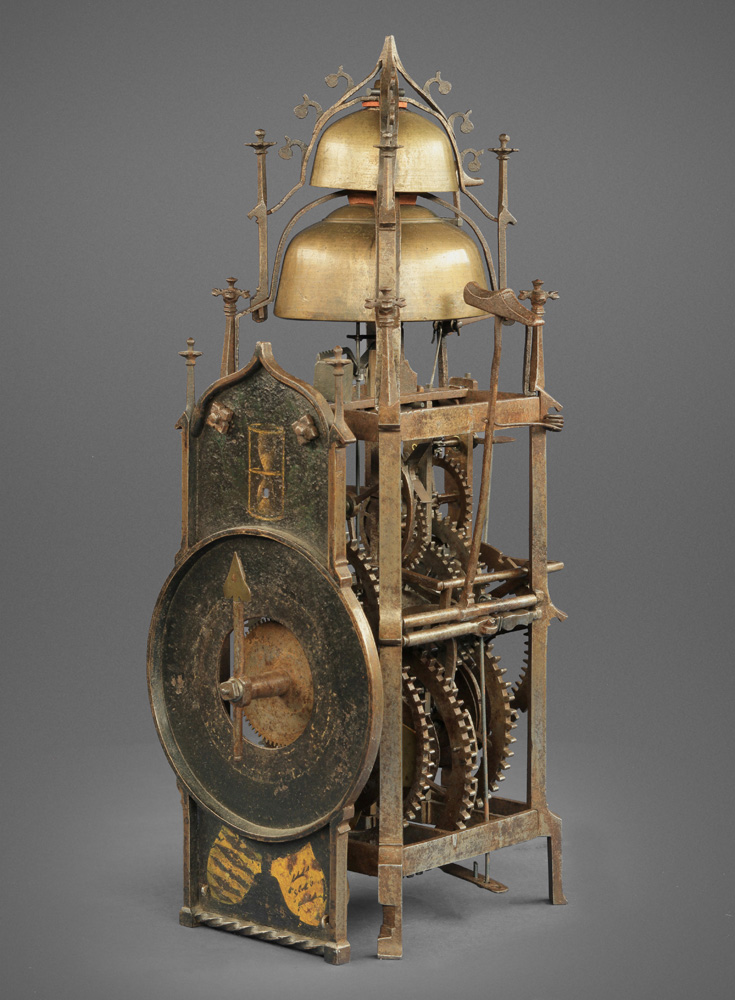 The outer silver ring has I-XII twice against a blued hour hand. The next gilt ring is an annual calendar, listing each month and divided for days against the gilt sun pointer also showing the position of the Sun on the middle silver Zodiac ring giving the Zodiacal angle, sign and abbreviated name. The Silver moon pointer shows the Moon's position relative to the Sun and the Zodiac. The inner gilt dials give the age of the Moon in days, the Southing and the time of high tide at London Bridge! Such a complex miniature table clock must have been very expensive and made for a VIP. Queen Elizabeth would not get out of bed until her Astrologer had predicted her day – was this the clock he used? 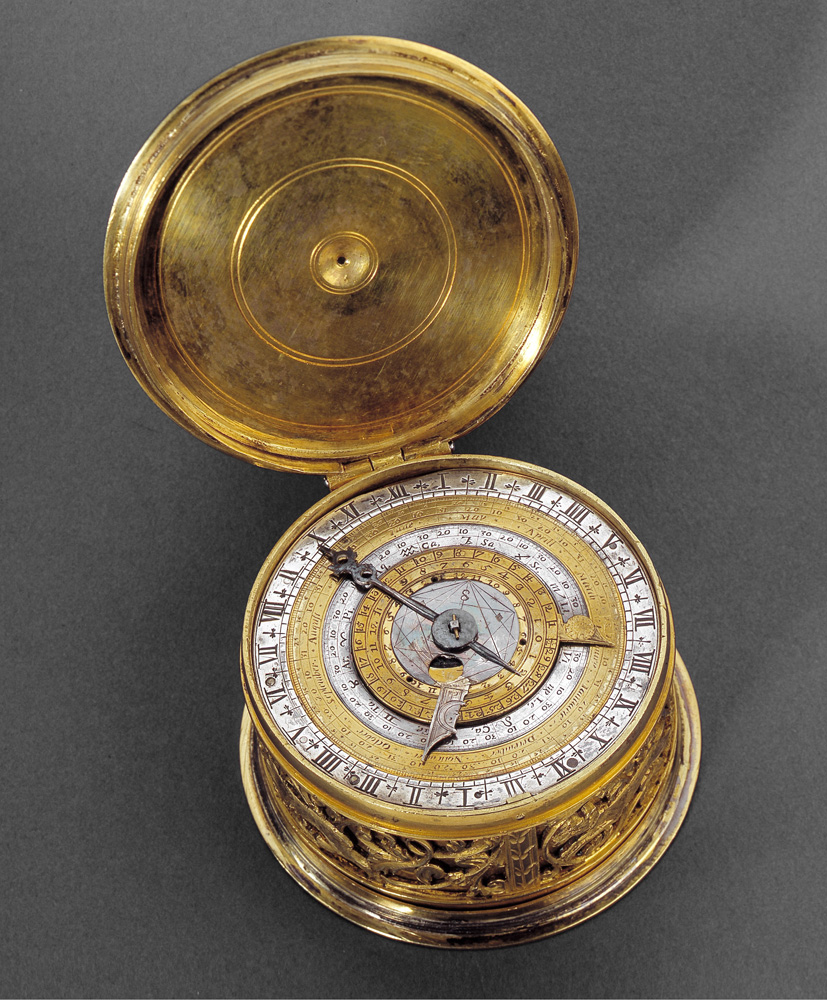 He appears in 1588 (the year of the Spanish Armada) as the first person named as a clockmaker in the Oxford city records when he paid a fee of 40 shillings to be Made Free to trade within the city. Thus, he is the earliest known clockmaker born and bred in England of yeoman stock from whom a signed clock has survived. Earlier known clocks are made by immigrant clockmakers, such as Nicholas Vallin (Exhibit 2) a Protestant who arrived with his family from the Low Countries to escape Catholic persecution.

Robert Harvey appears to have originated the brass lantern clock and this clock
made about 1610 is a very early English domestic clock. The design is reminiscent of the wrought iron Gothic clock at the entrance to the exhibition which required exceptional blacksmithing skills. Using brass castings simplified the construction and reduced the cost! 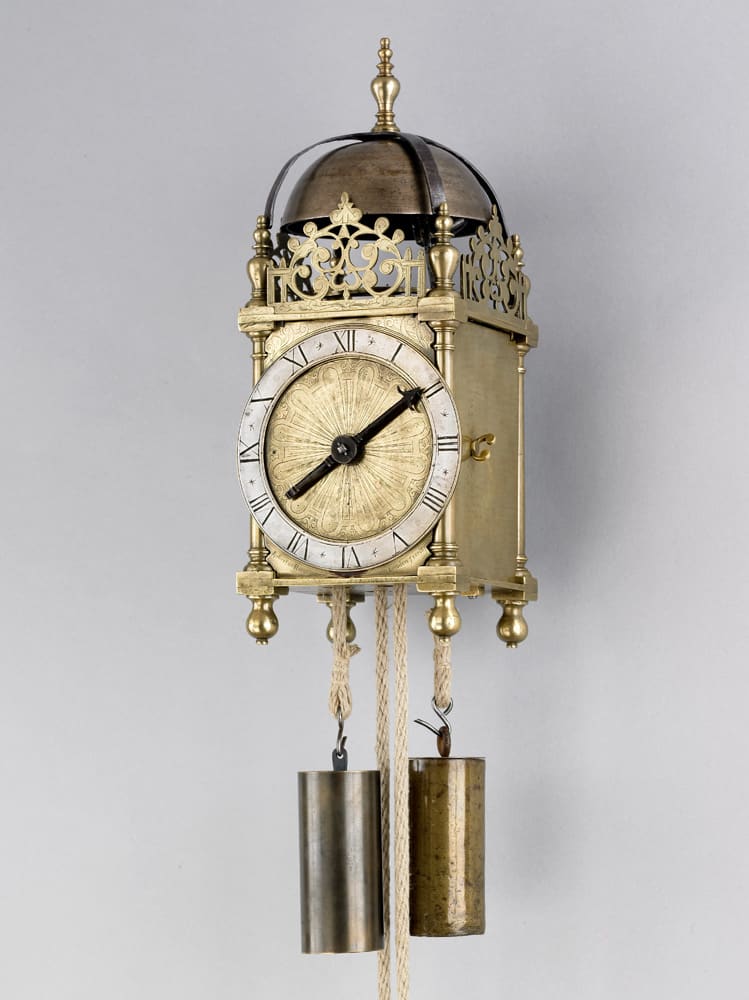 Though similar in shape to Exhibit 5, this 400 year old watch really puts modern complicated watches in their place! Firstly the case is a work of art in its own right. The silver top and bottom are engraved with scenes from Ovid but their inside faces have King James I's coat-of-arms and a portrait of the king himself. The silver case band with red detailing
has Chronos with his scythe and St James under his sun hat between floral branches.

The movement shows the hour, the day – sign, name and deity, the month – name and
date together with the sign of the Zodiac, the age and phase of the Moon, and the planet hour – useful in astrology. The dial is gilt and spaced by elegant pierced Egyptian pillars. The watch is signed David Ramsay Scotus me Fecit. 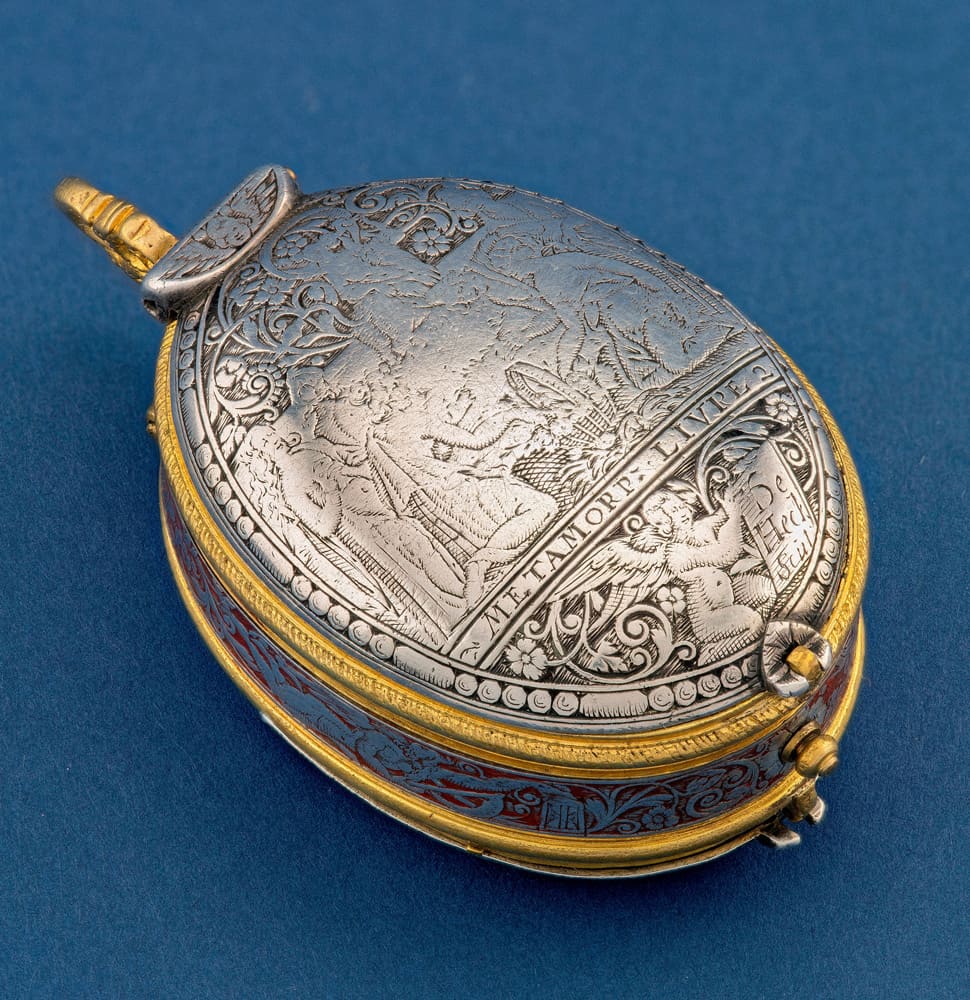 The silver case has a figure of Wisdom on the front and a figure of Hope on the back. The main case section has a silver floral band with rabbits. But it is the super-fine engraving on the dial that really shows this little watch as being made by James I’s personal clockmaker. The silver chapter ring is surrounded by a band of foliage with a city view containing a church with a flag in the centre.

The movement with vase shaped pillars, has a steel balance wheel held by a pinned floral spray cock (screws to hold the cock were not yet invented 400 years ago!) The gilt backplate is proudly engraved David Ramsay Scotus me Fecit maintaining David’s Scottish credentials working in London as the Royal Clockmaker. 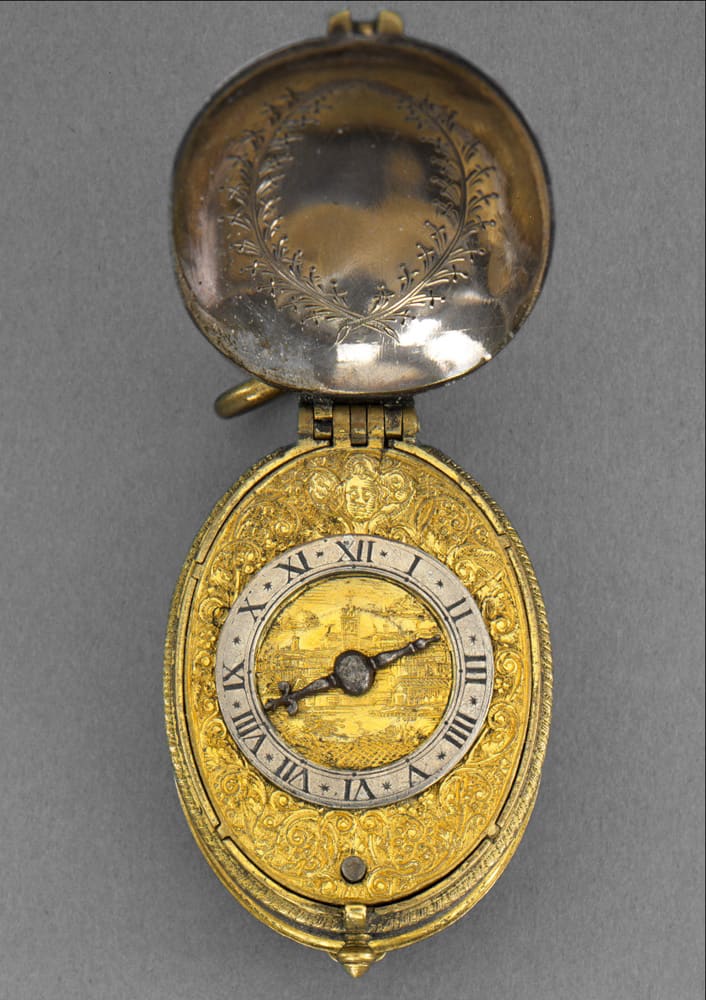 James Vautrollier gold puritan watch gives a deep insight into the Puritan age. Primarily Puritans were against public ostentation and show. Thus, their possessions were without ornamentation. There are several watches from this period in giltmetal, silver and silver gilt, but pure gold cases are a rarity. James also made watches in beautifully engraved silver cases during this period and one was in the Percy Dawson Collection.

James was listed in 1622 as an alien working ‘...Without Temple Bar...’ He was most probably a Huguenot who was escaping the religious Catholic persecution rife on Continental Europe following the St. Bartholomew’s Day Massacre in 1572 and continuing even after the Edict of Nantes, signed by King Henry IV of France in April 1598.
This little watch not only tells the time but also has a calendar to give the date. 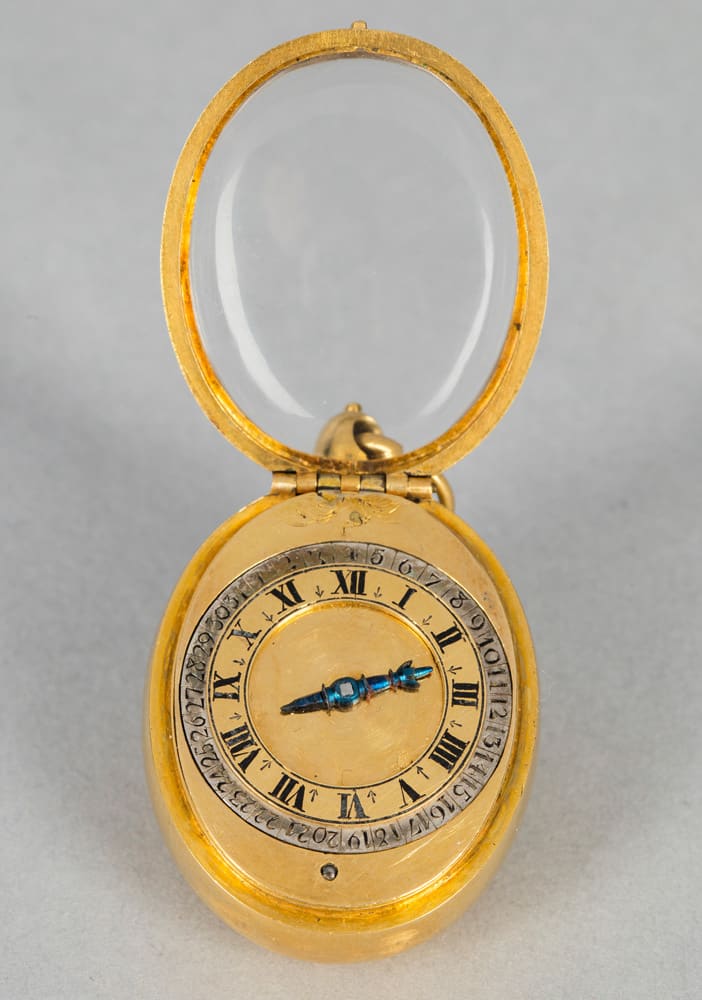 In an age of candles and few spectacles, how was this watch made? The quartz crystal case
is so hard that after 400 years of handling, there is not a scratch anywhere! The silver chapter ring has an inside diameter of 11mm. Engraved within is a stream, an ancient tree and a town background. The teeth on the four-train gears are miniscule, filed by hand with homemade files.

Edward was baptised on 22nd August 1602 in Southill in Bedfordshire and apprenticed in 1618 to Richard Rogers in the Goldsmiths’ Company until 1626. On 8th August 1627 he married Edmund Bull’s daughter Ann, and a year later Edward was promoted as overseer of the family workshop in Ram Alley – one of the ‘Liberties’ outside the control of the Guildhall. Was this little watch created there with Huguenot workers? 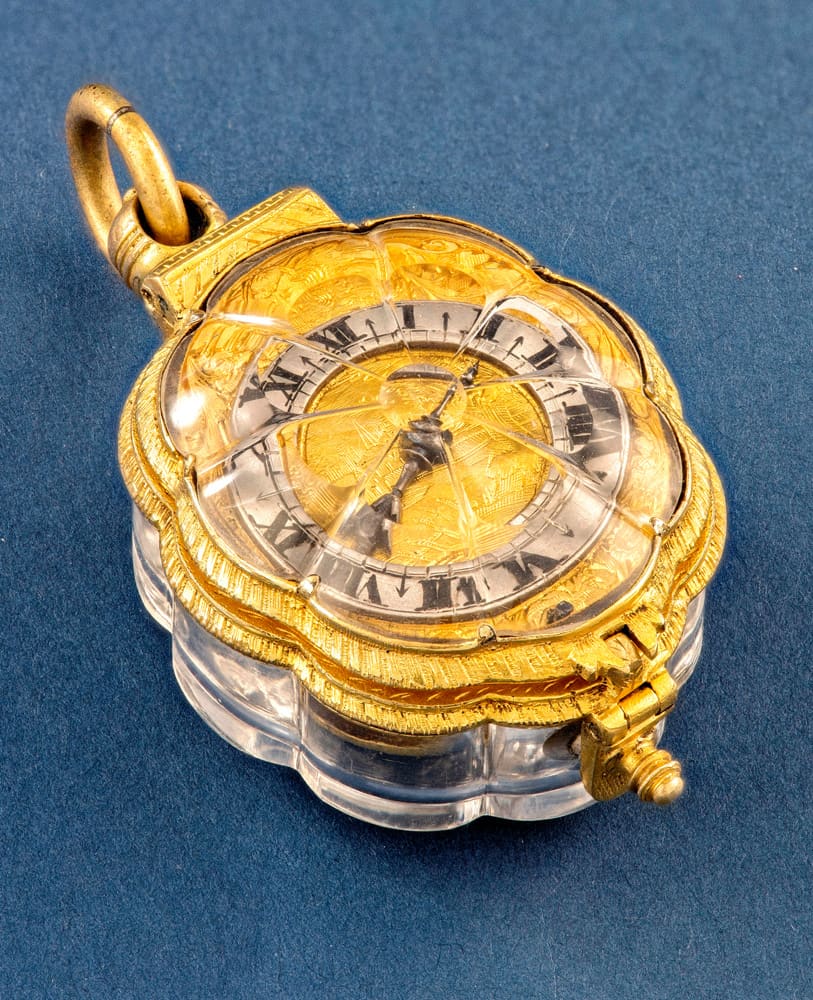 The papers of the 17th century scientific intelligencer, Samuel Hartlibb, held at Sheffield University, reveal that Fromanteel made clocks without a balance wheel, ‘in sted of which there shall be a pleasant motion of bullets running continually’, as in this rolling ball clock. The exclusively continental nature of such and other clocks made early in Ahasuerus’s career, suggest a training in Germany. Such an apprenticeship could have been under perhaps Sayller, in Ulm, or even under Burgi, in Prague or Kassel.

He could have known of Burgi from his first London employer, Cornelius Drebbel, court mechanician to James I and Charles I. 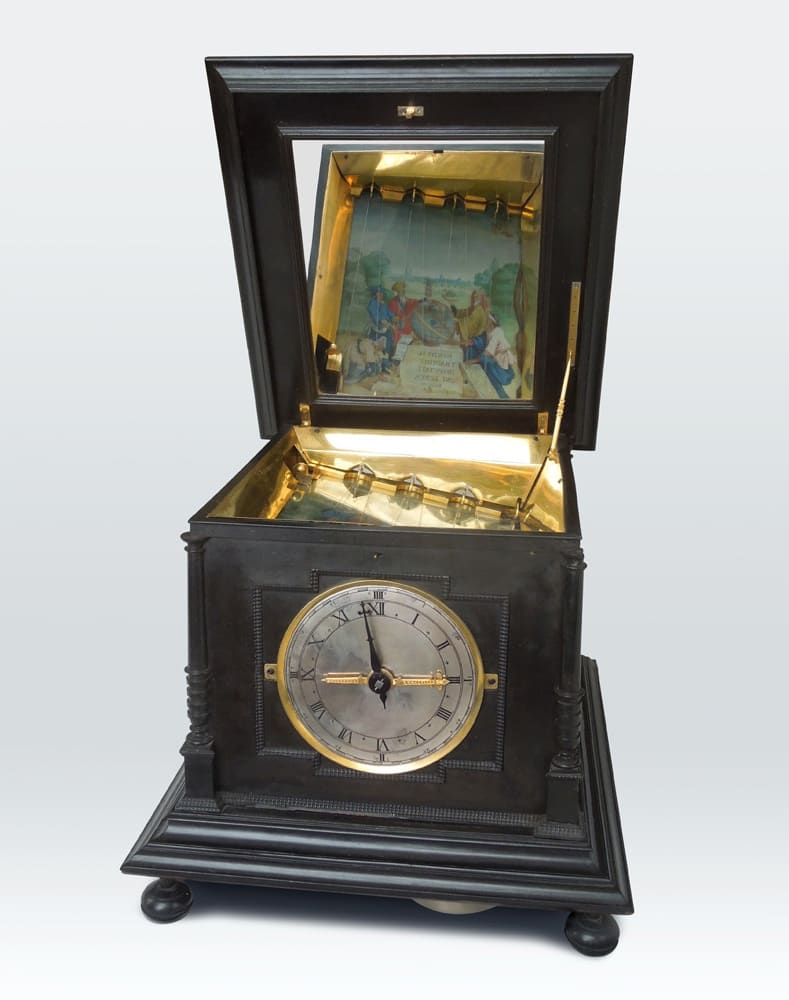 Dated 1636 William Bowyer large striking lantern clock with alarm. Few clocks are dated so having the date on this large clock is extra special. (For a small dated 1669 lantern clock also containing an alarm, see Exhibit 55 by John Knibb.)

William joined the Clockmakers’ Company in 1632 but was not an enthusiastic member. In 1640 he was asked to become an assistant but presented a great chamber clock to the company to be excused of all such duties.

Nevertheless, he did became an assistant in 1651 and a warden two years later. He was again in trouble with the Company for not enrolling his son-in-law who was working in his business! 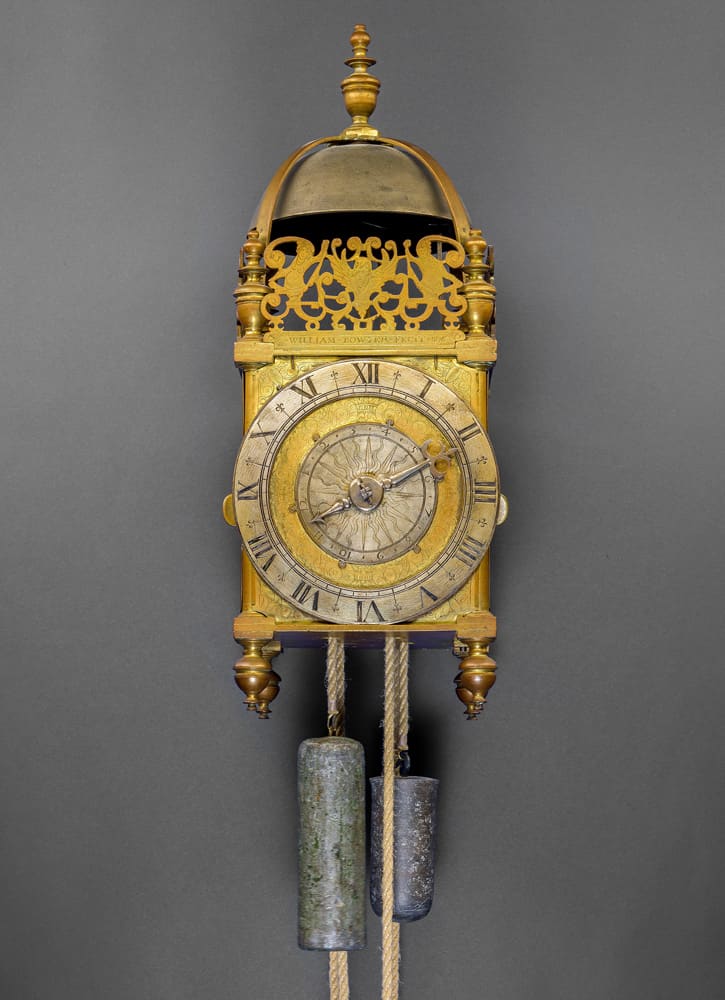 This circular table clock with alarm is signed 'Edward East fecit' hidden on the backplate. Whilst this clock was being produced, Charles I was trying to get Parliament to fund a war against the Scottish Covenanters, but was unsuccessful, so he dismissed the ‘Short’ Parliament. The King was defeated at the Battle of Newburn when the Scots invaded Northumberland and a peace treaty was signed at Ripon. The King then summoned the ‘Long’ Parliament which impeached the Archbishop of Canterbury Laud for treason! Not a good time to sell a luxury travelling alarm clock!

And what a pretty little clock it is. The silver chapter ring surrounds the florally engraved gilt alarm disc, but the silver band around the case drum is a replacement – perhaps the original was cut off and melted down as the unrest intensified to all out civil war. 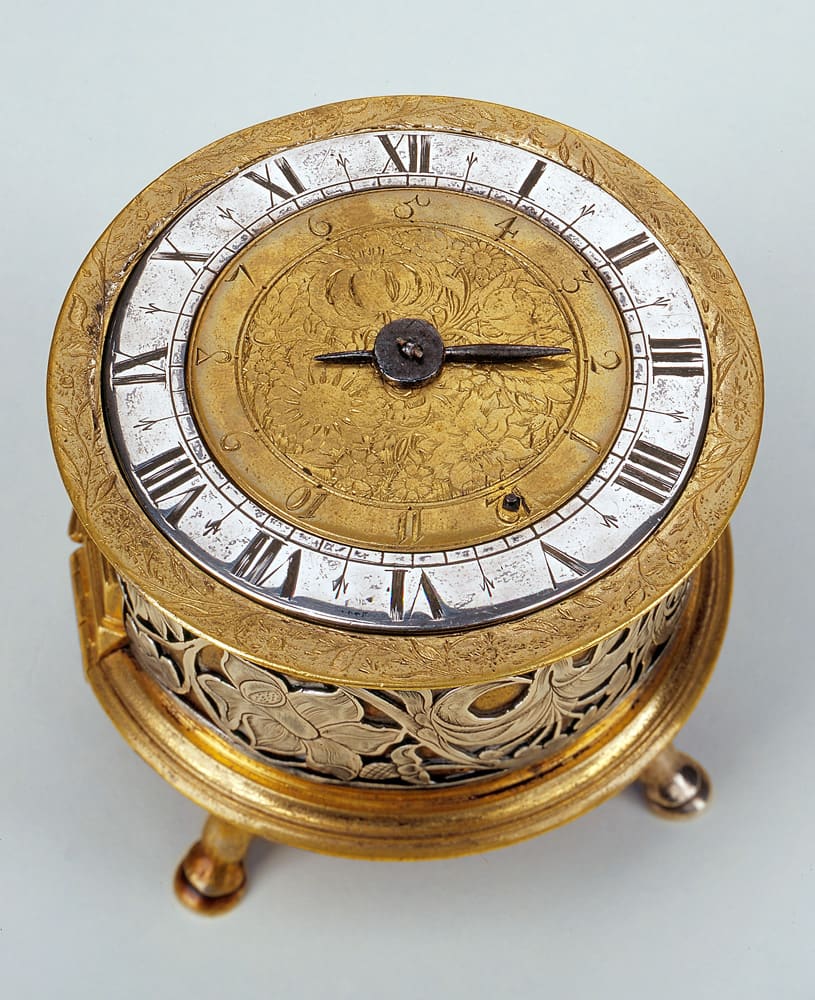