Grande sonnerie striking clocks are rare and complex and this one by Edward East certainly fulfils this truism! The mechanism uses countwheels and can be thought of as striking the three quarters on a high bell, followed by striking the hours, on the hour, on a large low bell; a normal two-train quarter and hour striking clock. This requires a total of 228 bell strikes on the quarter and hour bells each 24 hours. However, to make the clock grande sonnerie, a third train also strikes the hour on the quarter hours on a separate hour bell that requires a further 468 strikes!
All this requires interlocking countwheel trains, pump-pieces, and the odd star wheel! If you ever let the strike trains run out before the going train stops the clock, you have an unhappy hour to get everything back in phase! 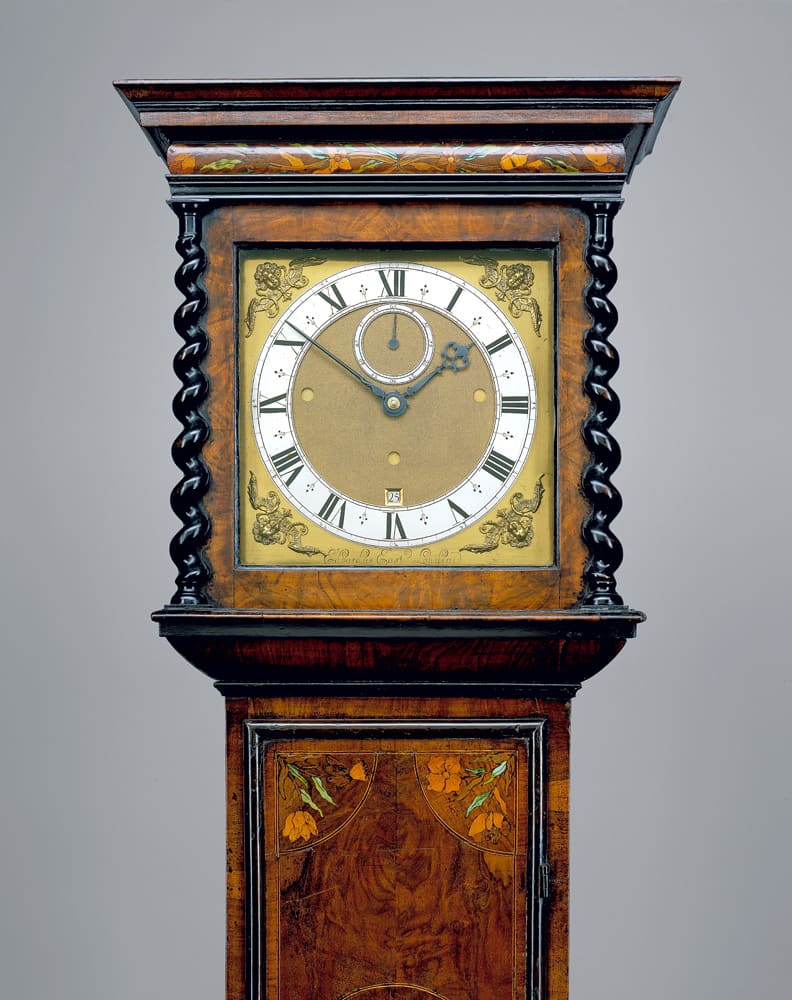 John Knibb Oxford quarter striking 3 train with a cariniana carcass and floral marquetry, topped by cresting. The narrow silvered chapter ring surrounds graceful Oxford hands, calendar and silvered seconds dial.
Ronnie Lee noticed that Joseph and John Knibb had many clock cases with a carcass of cariniana wood rather than the ubiquitous oak of other makers. This clock carcass is made from well-seasoned stable cariniana boards, perhaps from Willoughbyland (now Suriname).
The quarter striking is controlled from a small three notched count wheel on the outside of the backplate on the III side and the large hour bell by a countwheel on the extension of the IX side greatwheel arbor. 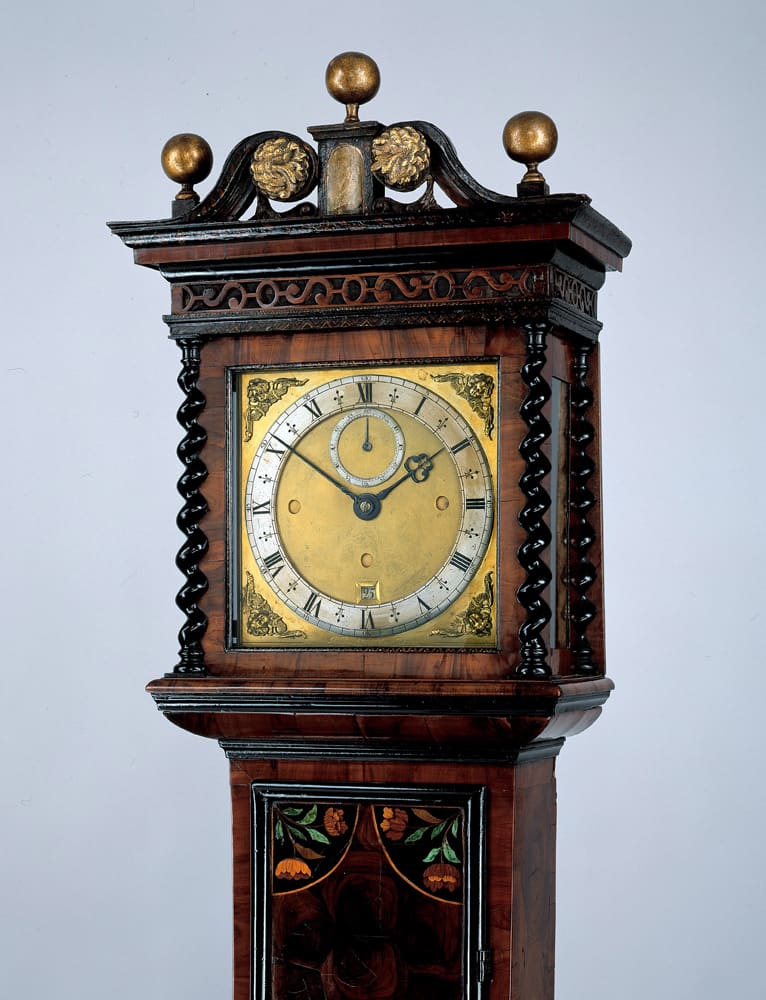 When you look at the dial of this longcase clock made by Joseph Knibb what do you see and what does it tell you? The winding holes are set lower on the dial than on most clocks. This is so an extra wheel can be fitted into the trains so that the clock can go for longer (in this case – 3 months) on a single wind. The chapter ring is marked with a IV rather than the usual IIII (look around at the other clocks). Joseph Knibb always did this when he made a clock with a Roman striking system which strikes the hours on two bells – one to represent I and the other V (with X, treated as a doubled-up V). The main advantage of this system is that it required fewer bell strikes to mark the hours in a day, reducing the power needed and extending the duration of the clock. 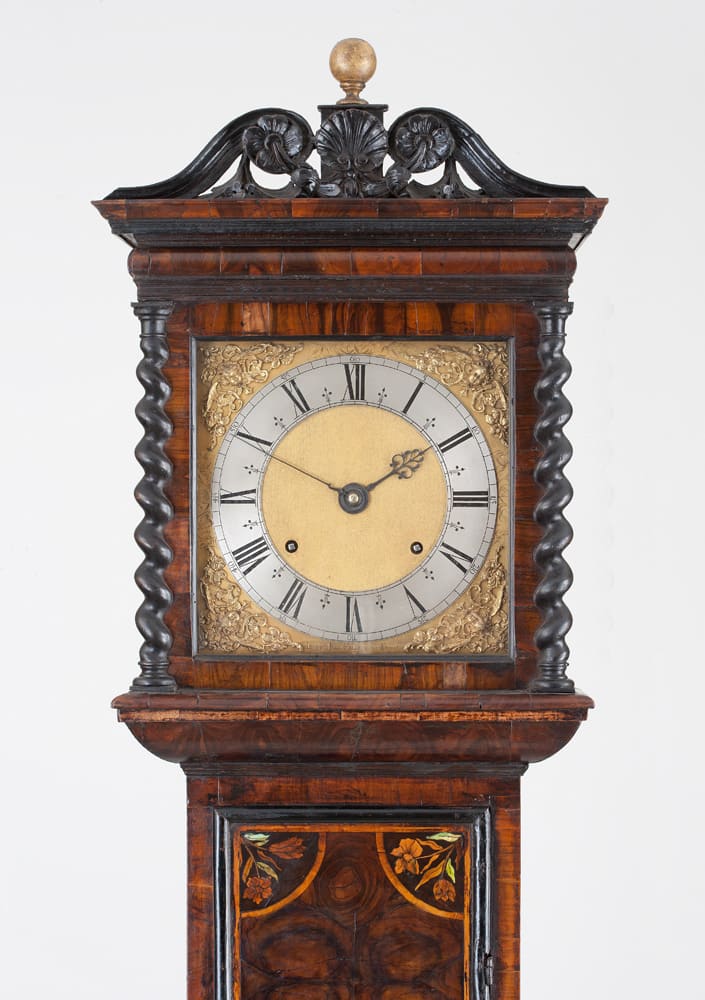 The maker of this three train full grande sonnerie in a floral marquetry longcase, Edward Bird, remains a bit of an enigma! There is no record of him even existing in the Clockmakers’ records – yet here is this fine movement with early spring loaded rack striking rather than the gravity returned racks of later movements. The Tudor rose in the centre of the dialplate also has an early feel about it making this one of the first rack striking full grande sonnerie longcases. 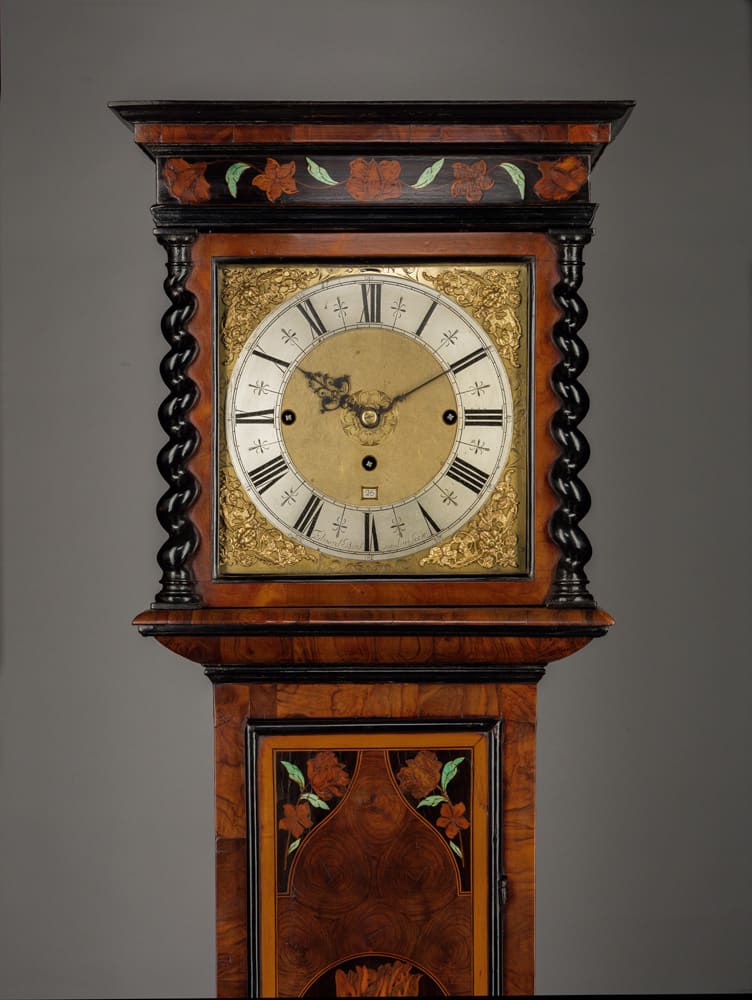 This Joseph Knibb is housed in one of his so called Phase III ebony cases, quarter ting tang striking two train with skeletonised chapter ring, calendar, alarm and a strike/no-strike lever to turn the bells off at night. Joseph appears to have presented an optional extras price list to his customers and this was the top of the range production! The engraving on the backplate is also of the very highest quality, complimenting the simplistic elegance of the dial plate. 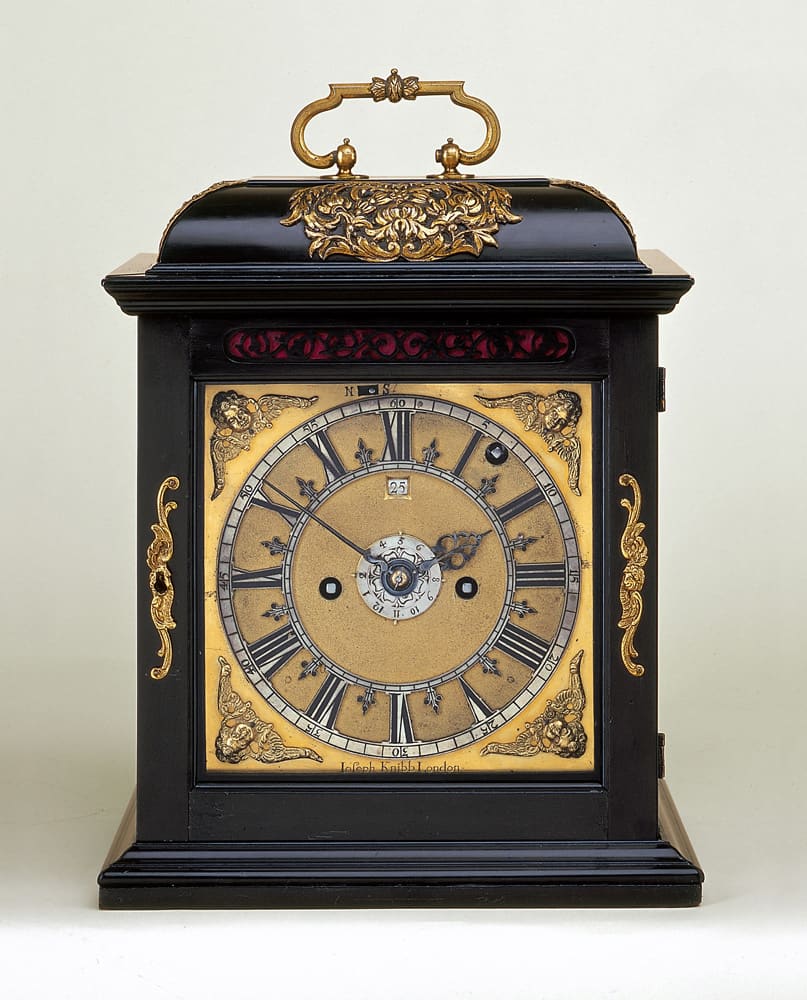 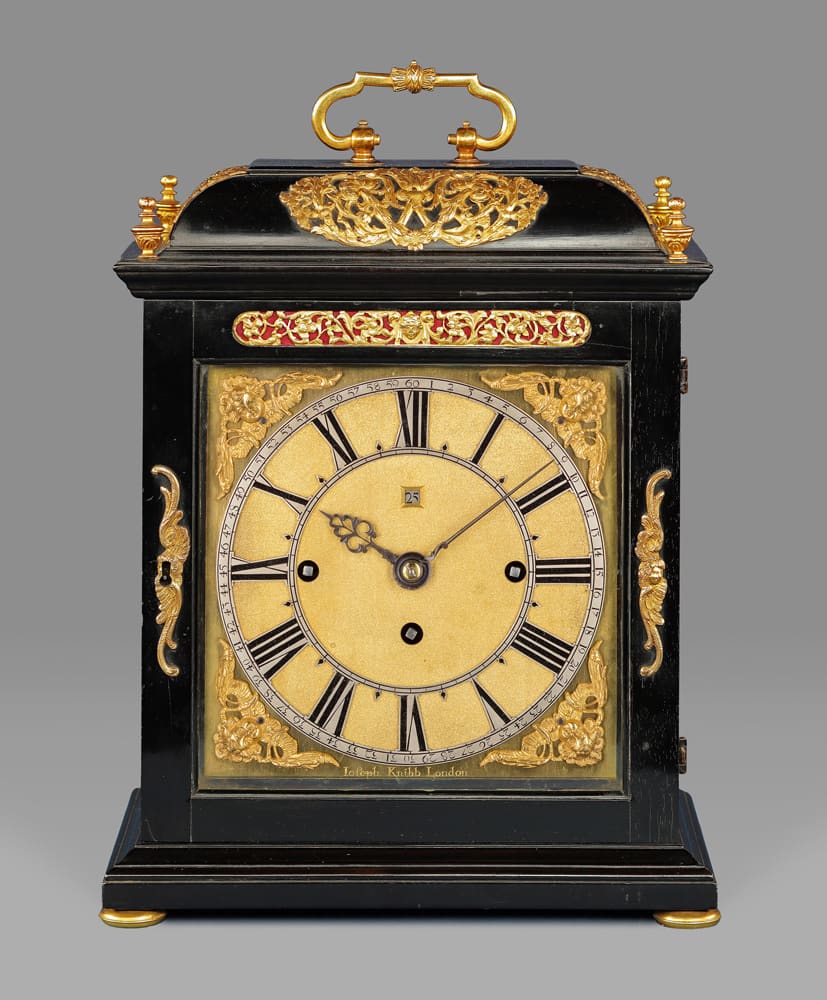 The first recorded reference to the Sussex Tompion is from the auction of the estate of the Duke of Sussex (George III’s sixth son) in 1843 where it sold for £6. The cast gilt sound fret is slightly asymmetric and this feature is clearly shown in Arnold’s still life oil, dated 1682 (shown alongside).
This clock is one of the earliest examples of a repeating clock. This was invented to replace a night clock with a candle inside. Thus a person awaking in the dark could pull a cord to hear the previous quarter hour followed by the last hour. In addition the clock has grande sonnerie striking, by also repeating the hour on the three quarter hours.
To deter his competitors from discovering how the two train mechanism worked, Tompion provided no back door and screwed the movement into the case! 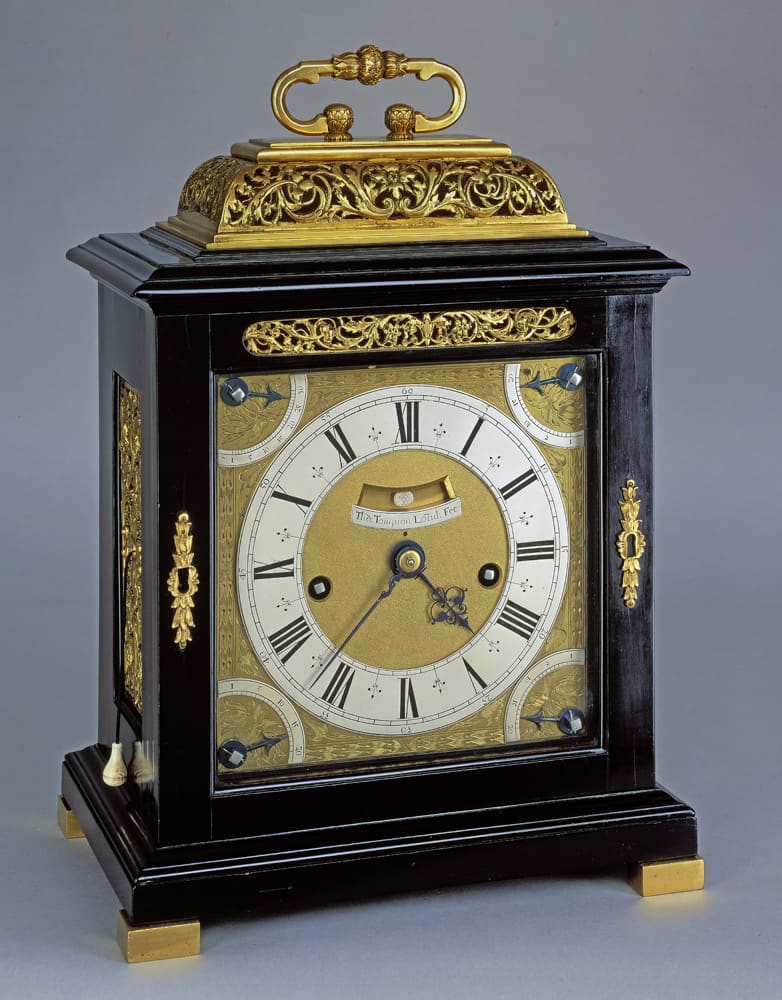 John Fromanteel. By the early 1680s date of this clock, the Fromanteels were losing their lead in the clock market to other, younger, makers, the most significant of whom seem to have emerged from training by, or association with them. These upcoming makers emerging from the Fromanteel axis included the Knibbs
(for sure) and (most probably) Tompion. This spring clock, while of high quality, is
not exceptional and it does not stand apart in quality from clocks by other makers
of the same date (as Fromanteel clocks initially had done), showing how the standards set by Ahasuerus Fromanteel in the late 1650s spread throughout the trade. 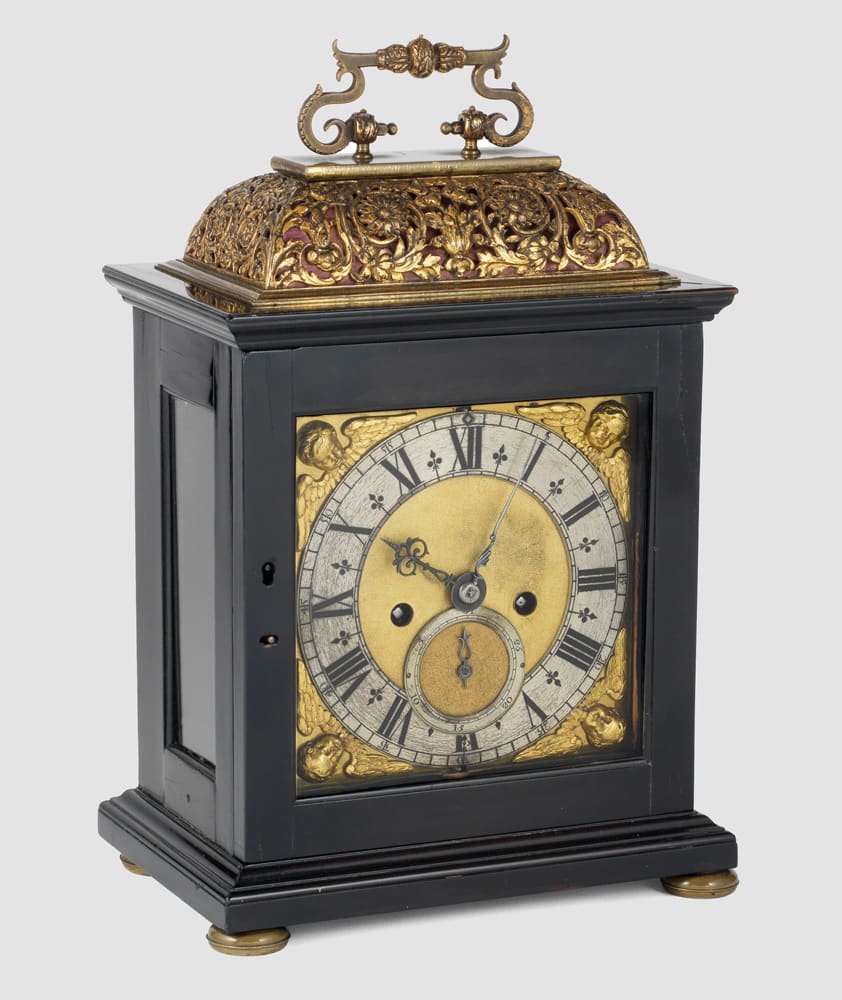 The wholesale trade between workshops ranged from the supply of movements only (see Exhibit 117), fully finished movements and dials, which were then cased by the retailers, to complete cased clocks finished and engraved by the supplier but signed for the retailer.
Looking at this clock as a whole, it is distinctly possible that it was ordered in its entirety from Henry Jones, while the Tompionesque basket might suggest that it was perhaps made to Gregory’s specification. 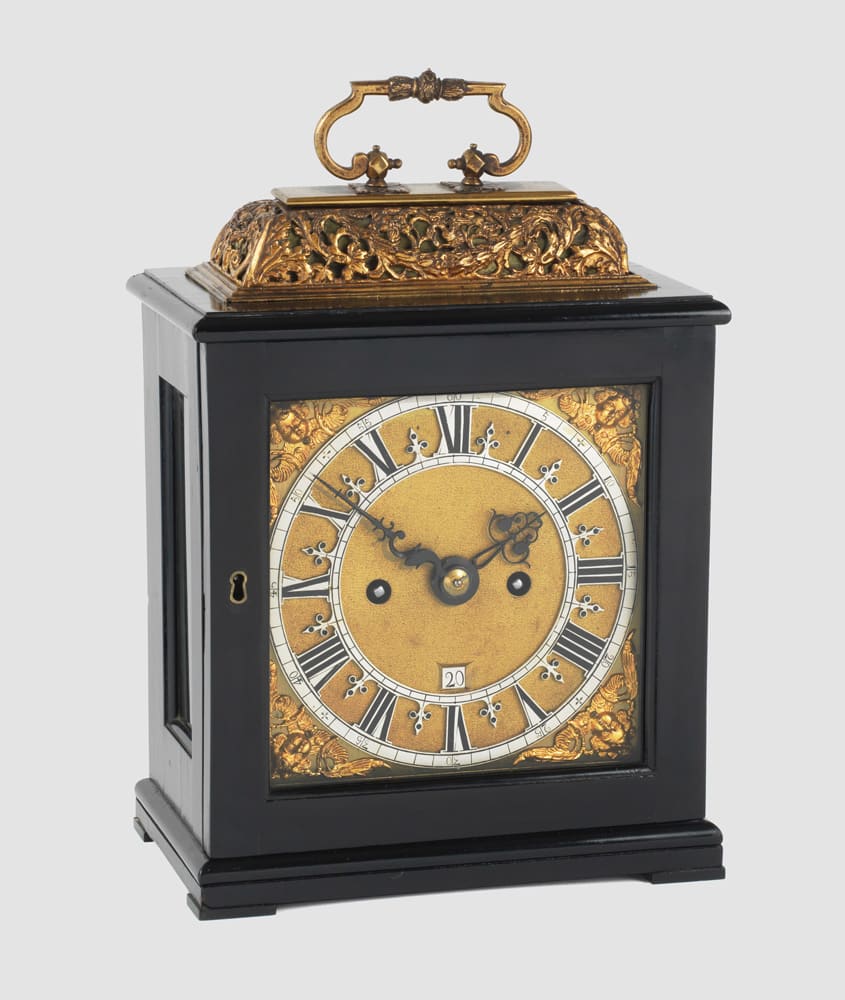 The Joseph Knibb Roman striking three month longcase’s chapter ring is different to all standard clocks, though many people do not notice. Normal chapter rings have the usual IIII which, of course, is not a true Roman figure but has been used since clocks had hour hands, solely to visually balance the strong Roman VIII. The Roman IV on this clock shows this striking system sounds out Roman Numbers on the hours –
Bing = I (1), Bong = V (5) and Bong Bong = VV or X (10)
Normal1 + 2 + 3 + 4 + 5 + 6 + 7 + 8 + 9 +10+11+12 =78x2=156blows/day
RomanI +II+III+IV+V+V1+VII+VIII+IVV+VV+VVI+VVII=30x2=60blows/day
Thus in three months a standard hour strike clock requires 14,976 hammer bell blows
but Roman strike clock only 5,760, a much easier mechanism to build and maintain. It’s a cost reduction! 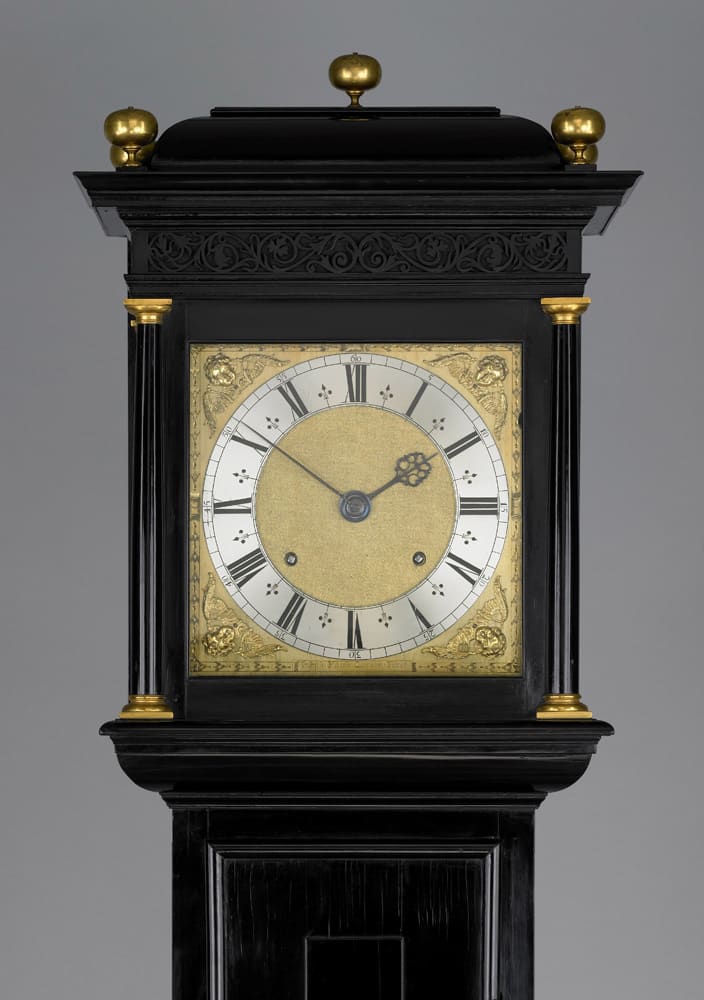