This exceptional architectural longcase clock is by Samuel (signed Samuell) Knibb and spent much of the last century in America until it was recently brought back to the UK. It is a technical and aesthetic tour de force that was almost certainly made for Charles II. According to an old label pasted inside the case, it spent time in Windsor Castle. The beautifully proportioned case is veneered with Princes Wood (also called Kingwood), a rare and expensive wood imported from South America. The chapter ring is faced with solid silver and the three-train movement which strikes the hours and quarters is highly sophisticated. 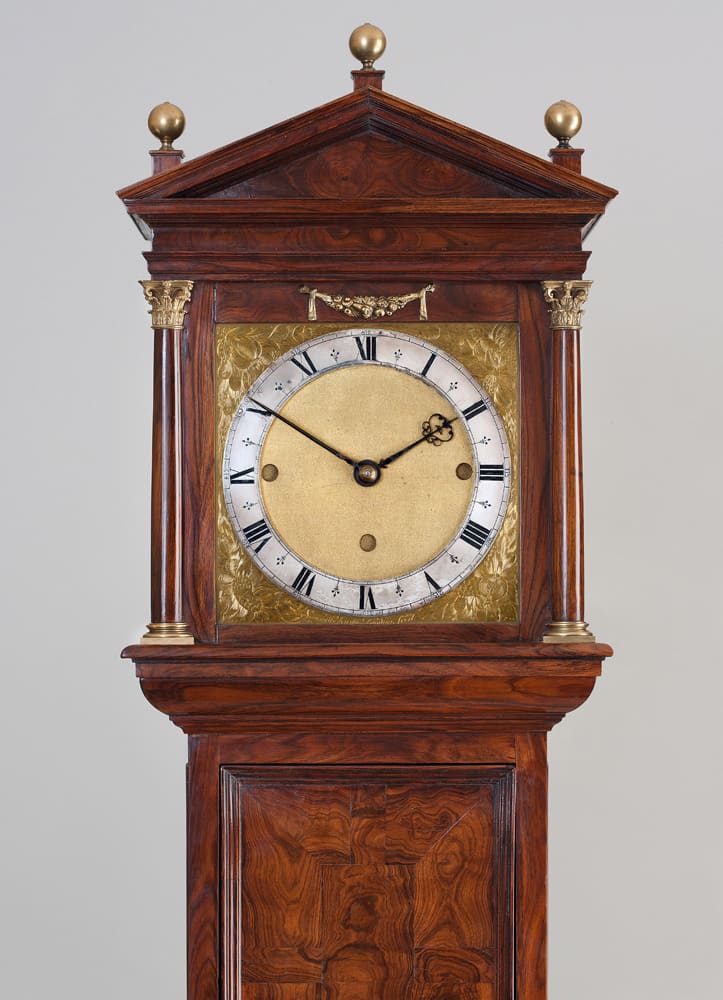 Joseph Knibb’s bob pendulum with verge escapement may be his earliest clock. Joseph was born in 1640 and was appenticed to his cousin Samuel Knibb in c1655, moving to the outskirts of Oxford in c1662.
The dial is engraved Joseph Knibb of Oxford. The careful choice of the word 'of' is interesting. Initially Joseph was deliberately working outside the Oxford City Liberties. In about 1665 he wished to move into the City and applied to be a City Freeman. This application was refused as he was a foreigner (having not served an apprenticeship under a Master in the City).
To circumvent these restrictions Knibb joined Oxford University as a gardener at Trinity College. Realising they had been outmanoeuvred, the Oxford Corporation allowed Joseph to negotiate his freedom by paying a fine of 20 Nobles and a leather bucket! 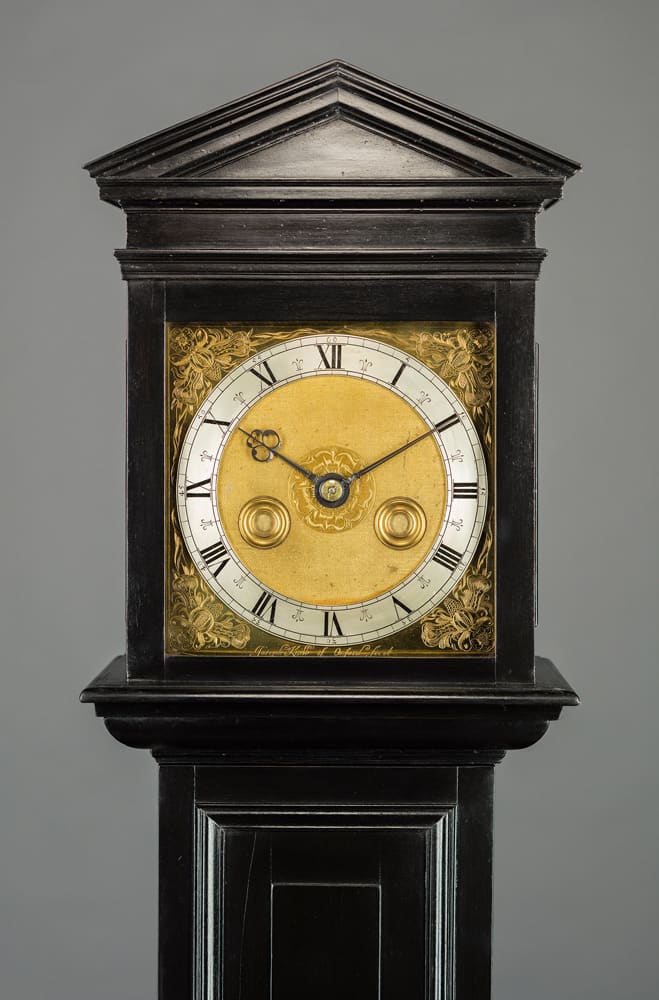 John Knibb hour striking miniature lantern clock with alarm and floral engraved dial. Unusually, the signature on the fret is dated Johannes Knibb Oxon fecit 1669 as John did not receive his official freedom from Oxford until 1673 and was thus officially debarred from signing his work.
John was born in 1650 so would have been 19 years old at this time. The miniature striking lantern clock with alarm is beautifully conceived and skilfully produced. It is a pleasant thought that John arose each morning to the sound of the alarm! Shortly after the clock was made John was left in charge of the Oxford workshop whilst brother Joseph went to London to take over Samuel’s workshop after his cousin’s premature death probably from the last vestiges of the plague. 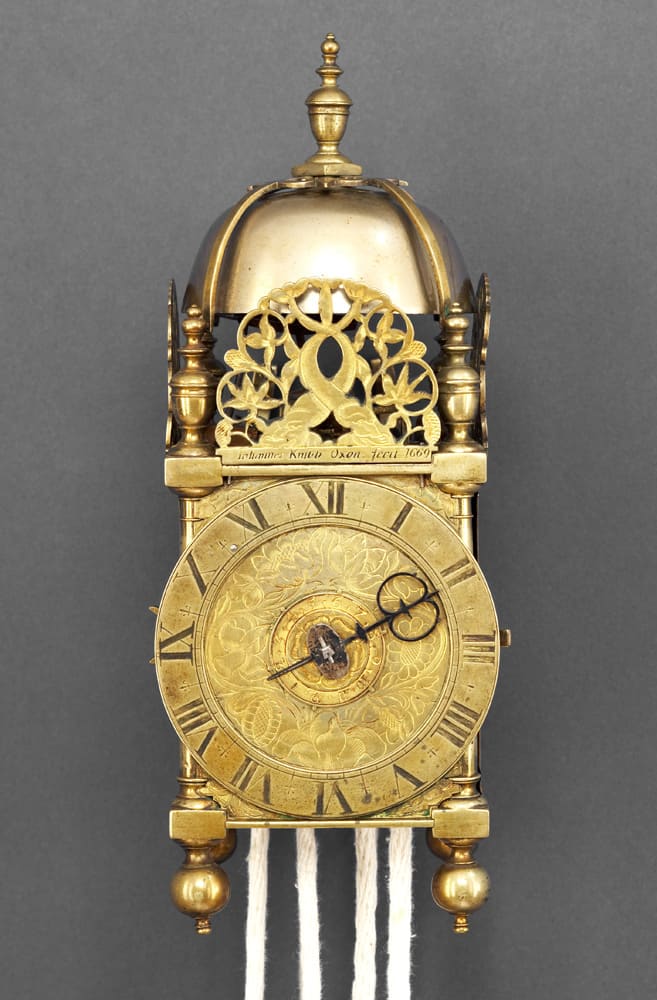 The William Clement 8-day quarter striking ebony longcase had a convoluted design and production. The backplate and divided frontplate were scribed for a verge, drilled for a crossbeat and then fitted out with an anchor with a second and a quarter pendulum. As the dialplate has the unique sales point of a second dial, virtually universal with a long pendulum, it appears to be unlikely to be the first anchor escapement as mentioned in John Smith’s Disquisitions 17 January 1694. John Fromanteel and Samuel Knibb had already produced anchor escapement clocks without a second hand. More believable from the quote ‘... that well known Artist Mr William Clement, had at last the good Fortune to give it the finishing Stroke...’ is that Clement added the second hand and seconds dial. The three bell quarter chord and the hour bell are operated by the countwheel through a pump piece. 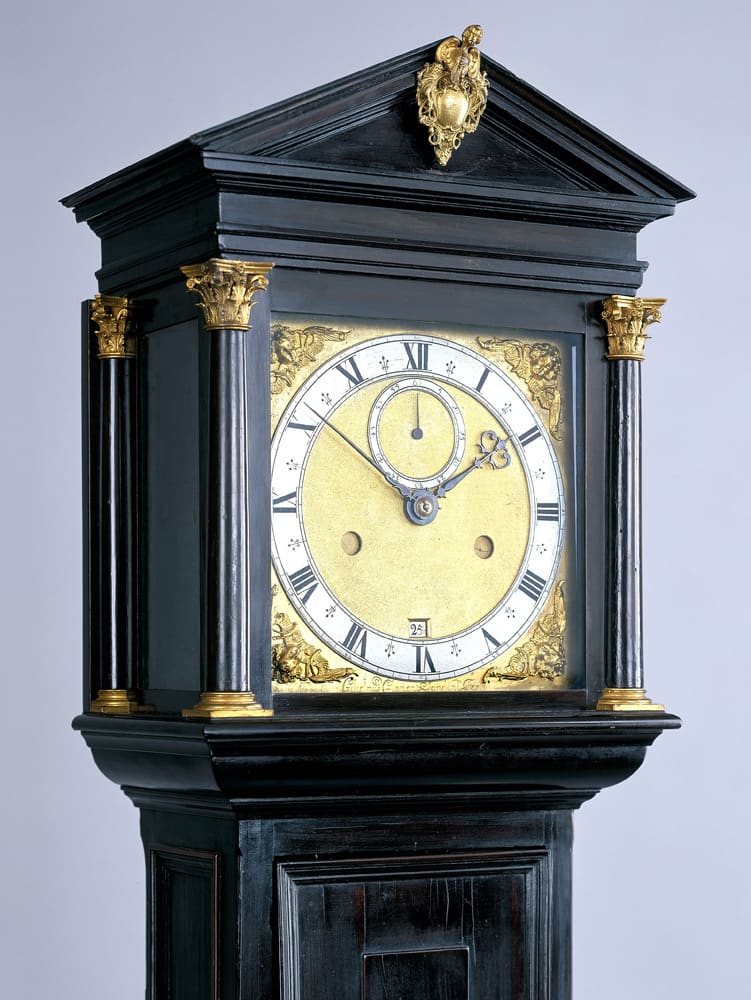 The Spanish Fromanteel ebony longcase by John Fromanteel turned up in Geneva with only the information that this clock was from Spain. This was believable as the movement and the inside of the case were covered in fine red dust from a dry country.
The introduction of the long pendulum, beating seconds, made it easy to fit a second hand. With the escapewheel planted on the centreline, extending the escapewheel arbor would have allowed the fitting of a central seconds’ hand and dial. This was a new unique sales feature.
Yet this going train has offset pallets that did not allow for fitting a seconds dial, hinting that it may have been made before William Clement arguably made the ‘final stroke’ of a seconds hand applied to the anchor escapement. 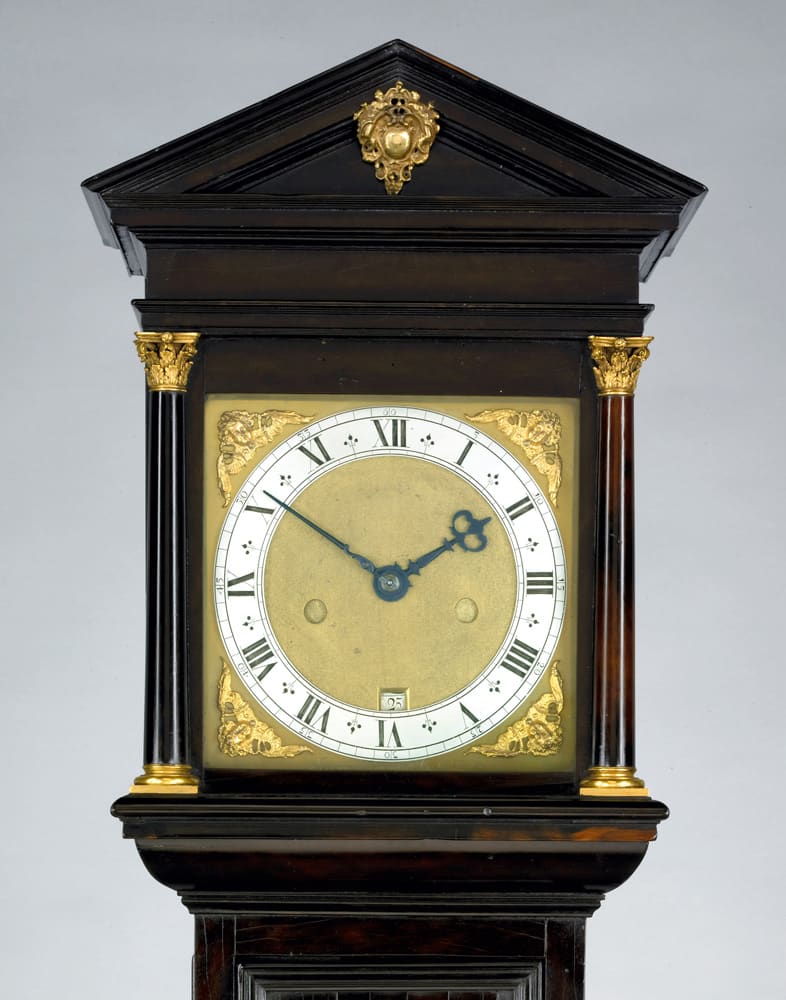 This unassuming but unique miniature longcase clock was made by Samuel Knibb. The architectural case is made of ebonised pearwood. The dial has a chapter ring faced with solid silver and distinctive corner spandrels which can also be seen on the two early box clocks signed by Ahasuerus Fromanteel (Exhibits 19 and 20) providing further evidence that these two men worked closely together.
The movement, however, is perhaps the most interesting feature of the clock as it has a very early anchor escapement regulated by a ten-inch pendulum beating half seconds. As with exhibit 55, the placement of the escape wheel did not allow for a seconds dial. 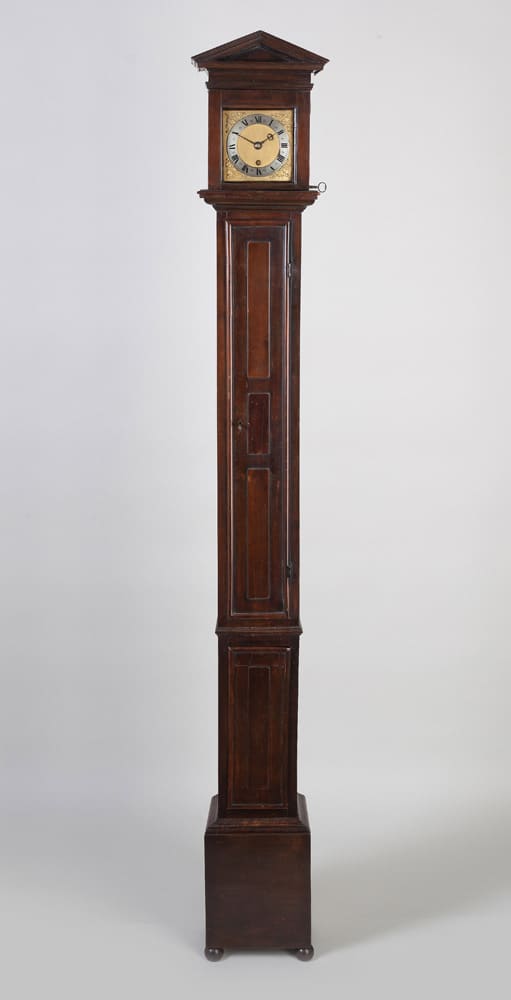 This diminutive longcase clock by Edward (signed Eduardus) East was made in London in the the latter half of the 1670s. It is in the typical early architectural style with a triangular pediment supported by gilt brass capped Corinthian columns. The case is particularly fine being veneered with lozenge-shaped inlays of Cocus wood, rather than the more common ebony or ebonised pearwood. The centre of the dial has a Tudor rose and there are tulips and other foliage engraved on every part of the dial outside the chapter ring. 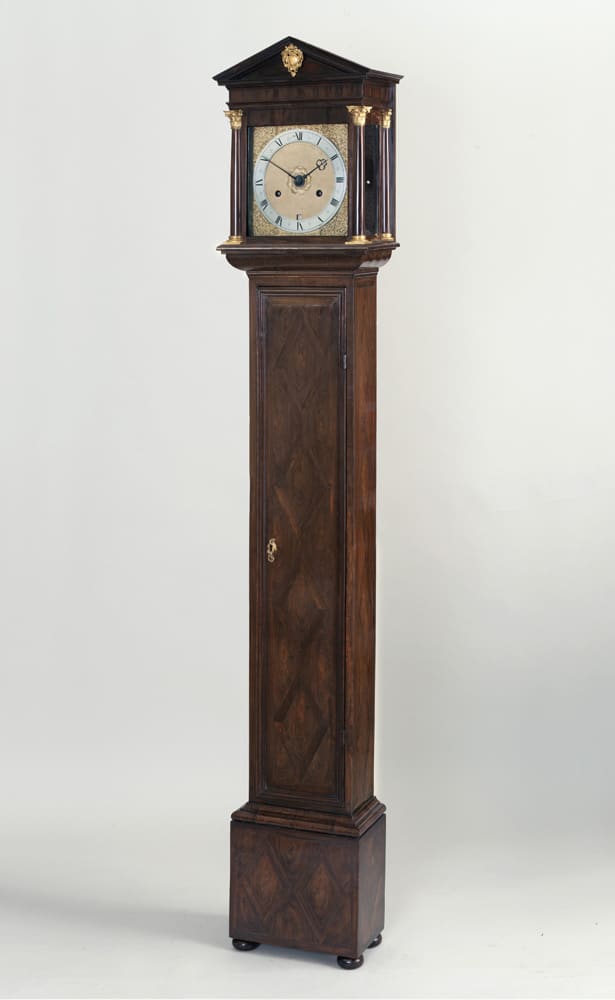 John Fromanteel The Spinola Fromanteel, so called because the painting of the dial includes the coat-of-arms of the Archbishop of Seville, Ignacio Spínola y Guzmán. Exhibit 55 also has a Spanish provenance, suggesting that John had a Spanish outlet in some way. The movement of this clock and the case design is attributed to the Classical English architect, John Webb, whereas the oil painting is signed by the teenage child prodigy of a painter, Juan Valdes Leal, son of the archbishop’s favourite painter. The fluted breche violette marble columns to the case are unique. A similar giltmetal central finial of Minerva in armour and helm, holding a gorgon head shield and spear, appears on a rosewood table clock also by John Fromanteel. 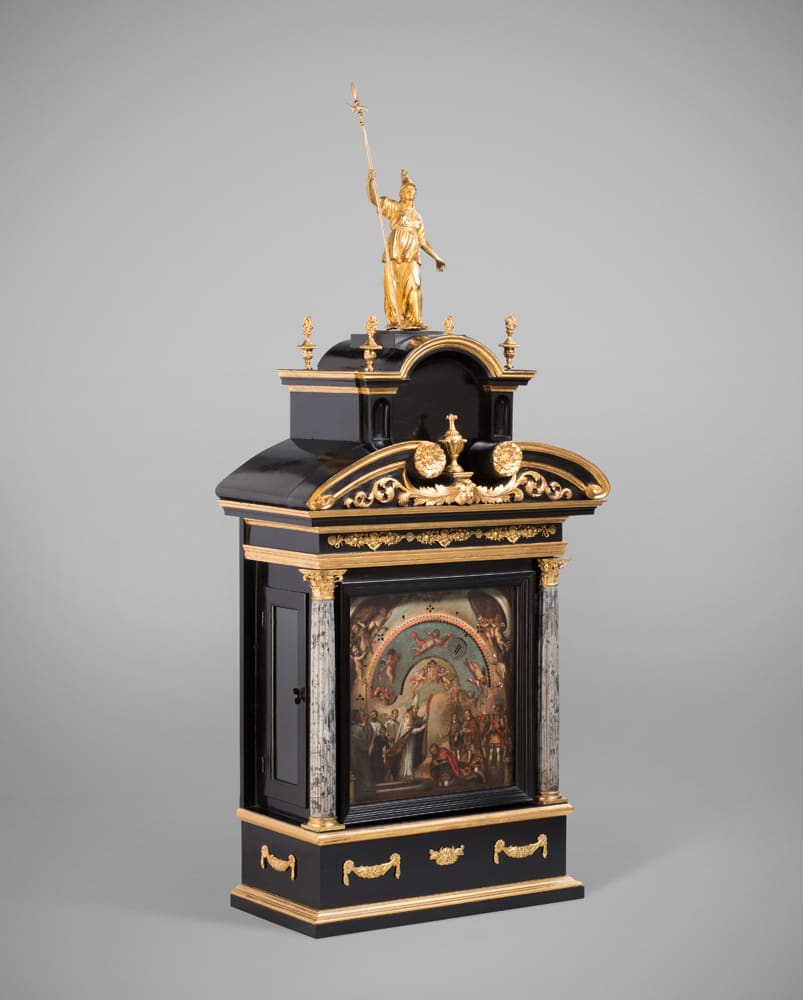 This is a clock that no one imagined existed – a spring timepiece of c1670 using the anchor escapement – it emerged in an Irish country house auction some years ago along with another Clement timepiece with anchor escapement, scratch-dated on the plates 1663. That date seems too early for the anchor escapement; it is now clear it was devised earlier than the 1671 traditionally ascribed date. Here the pendulum is unusually of Huygens’s pickaxe form, a rare survival. Clement is one of the potential clockmakers for having invented the anchor, but (chiming with a theme of this exhibition) the escapement’s development was more probably a collegiate effort within the Fromanteel circle. The regulation dial, to the right side between the plates, as on Fromanteel longcase (Exhibit 77) indicates Clement was a member of that circle. The hour numerals within circles perhaps derive from Ahasuerus’s early clocks (Exhibit 21). 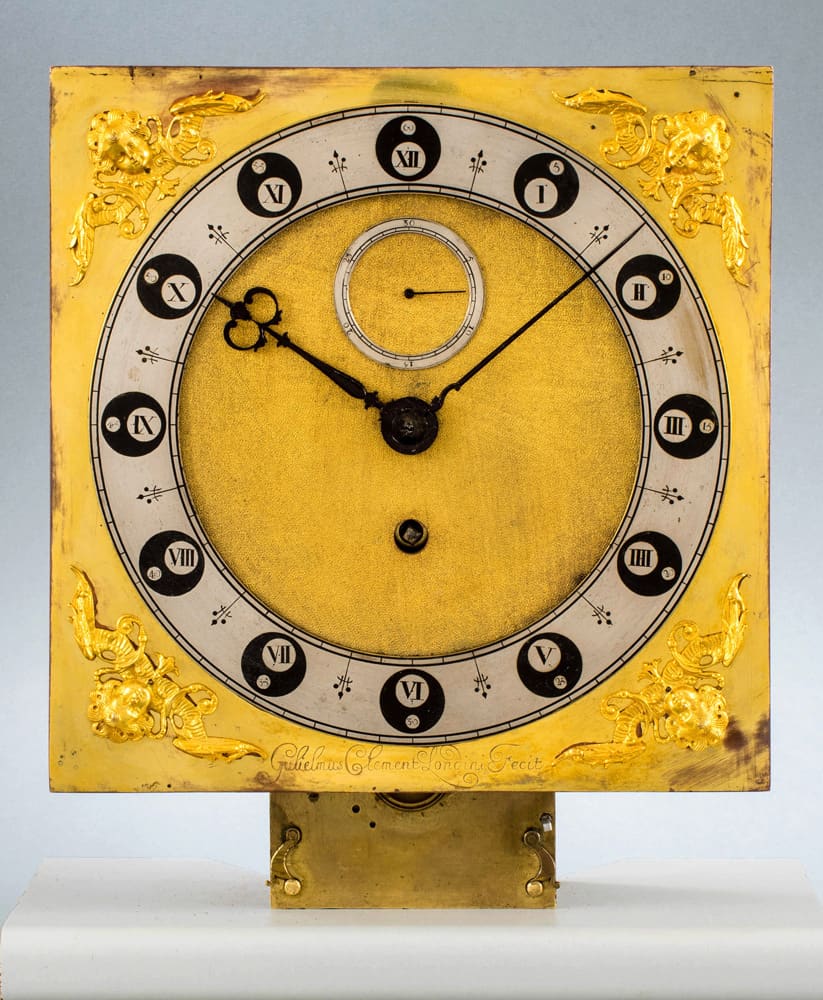 This John Fromanteel longcase is one of the earliest known uses of walnut veneer for a clockcase. In the past, most clocks and their cases were dated by furniture experts who used their knowledge of the introduction of exotic woods to replace ebony in furniture to date clocks. They wrongly assumed that the furniture came first and clocks followed. Just as the white iPhone introduced new technology against the usual black phone, so walnut, rosewood and olivewood were used 350 years ago to accompany the new technology of clocks with second hands.
Notice that the winding holes are closer together on the dial than other clocks.
This movement is experimental as the greatwheels are placed overlapping to the front and back, using narrower less costly plates. Conventionally, both wheels are side-by-side in the same plane, requiring more expensive wider plates.