What this clock loses in sophistication, it makes up for by presence, shouting out when striking hours with the loudest bell of its decade!
The posted frame movement is very much linked to Ahasuerus Fromanteel. Like Ahasuerus, Andrew, also came initially as a Huguenot to Norwich. He joined the Blacksmiths Company before moving to the Clockmakers in 1646 and joined the Fromanteel family by marrying Ahasuerus’s younger sister Elizabeth in 1646.
Andrew, like Ahasuerus was often in conflict with the Clockmakers’ Company. Despite his protests, the Company elected him an Assistant in 1674, but he never attended; probably slipping out of London to avoid serving! 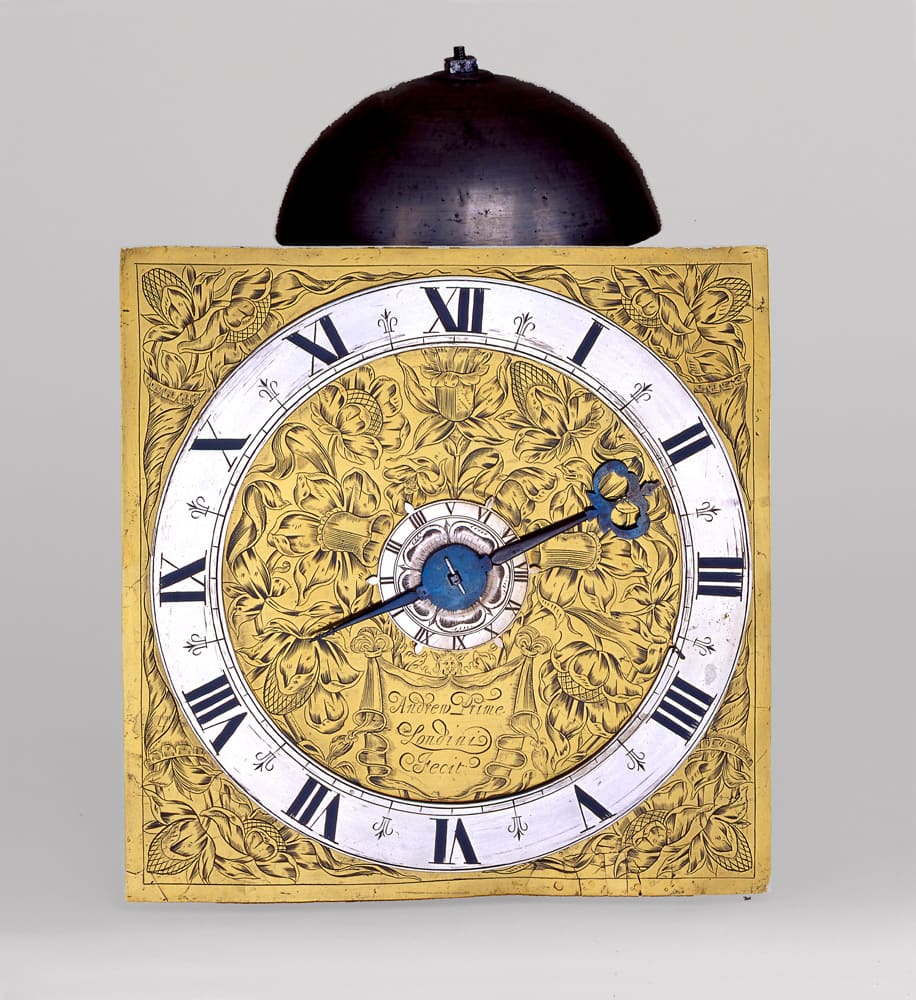 Compare the signature in this clock to that of the earlier verge bob pendulum longcase Knibb clock, Joseph Knibb of Oxford (Exhibit 52). Here Joseph now signs himself Joseph Knibb Oxford fecit. Joseph is now established in Oxford but he has also fecit (made) the clock in Oxford! Here we have confirmation of Joseph’s success in overcoming the prejudice of the Oxford City Guilds.
Soon after, Samuel Knibb died and Joseph leaves Oxford and his workshop to be run by his brother John whilst he takes over Samuel’s London workshop. Heath tax assessments (London Records Office Ass Box 25/9/27) shows Joseph Knibb in Wa(l)ter Lane with
7 hearths in 1672, near to Thomas Tompion at the corner of Water Lane and Fleet St.
Many of Tompion’s clocks are of a grand design. This Knibb clock is not grand but it is certainly a little charmer! 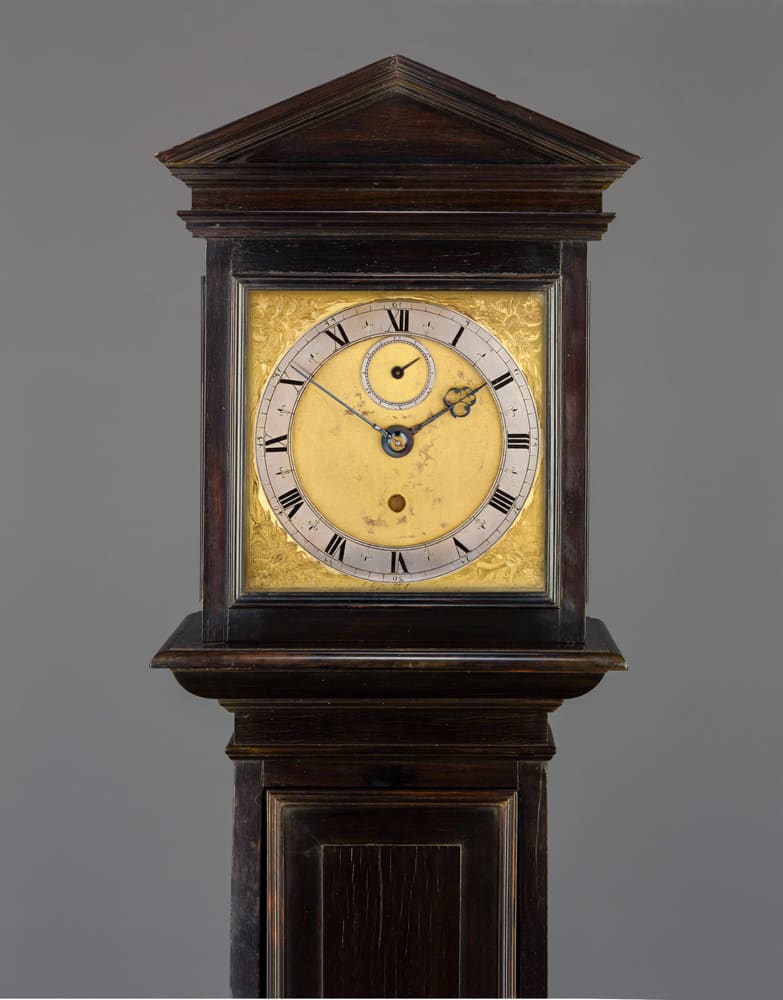 Henry Jones was apprentice to Edward East and was freed by the Clockmakers Company in 1663. Then, London was settling down with the stability of the return of King Charles II and all must have looked rosy to a young clockmaker setting out in life on his own account. But what a change was about to hit Henry; plague broke out in London claiming 200,000 victims and the next year a third of all citizens lost their homes whist many clockmakers lost their premises and all their tools and stock.
Henry was lucky through this period to produce this clock and to lose neither his life nor his livelihood. He went on to produce many clocks, mostly good quality but mainstream, without innovative flare and new features such as those of John Fromanteel, his contemporary. 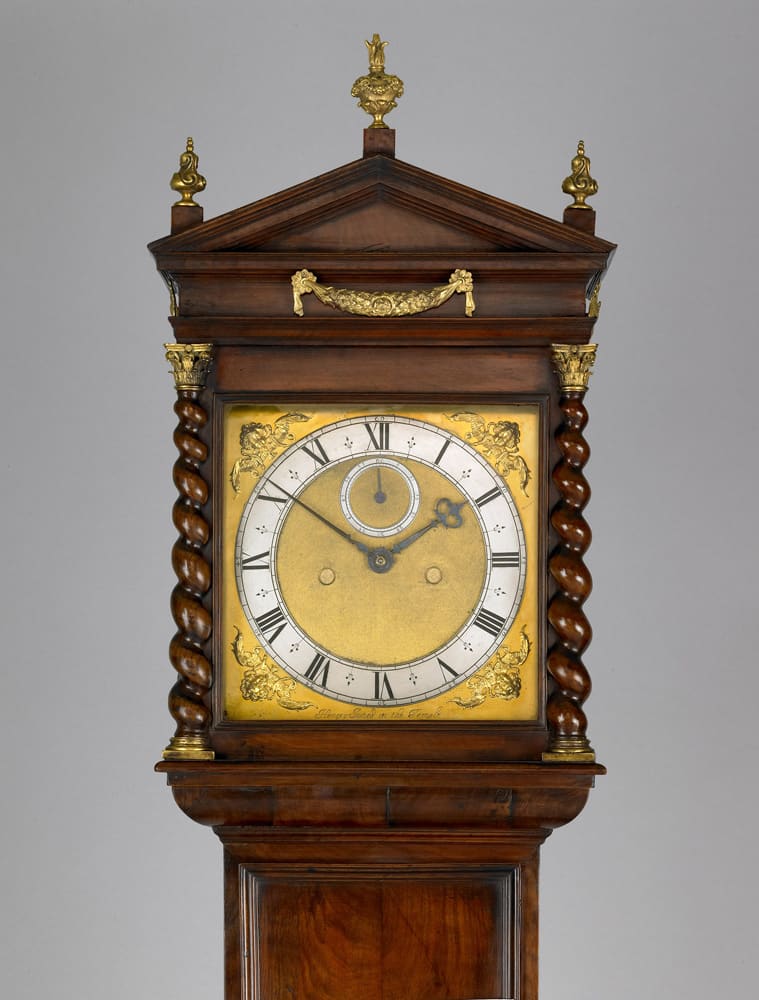 Edward Fowell ebonised longcase with alarm is in a softwood case veneered in ebonised fruitwood. The case construction is unusual, as the door is the full width of the case, abutting and covering the two side boards of the trunk. This is a very practical design, rather than the door let in between the inside faces of the side boards. The visually unbroken door panel widths can be designed to only consider the visual effect rather than the side boards’ dictation of the visual framing.
Another unusual feature for a longcase clock is the provision of an alarm. It is difficult to imagine this hour striking longcase in a bedroom, but people are known to take their favourite possessions to bed with them!
Edward came from the Merchant Taylors’ to the Clockmakers’ Company, being made a free brother in 1670 – about the time of making this clock. 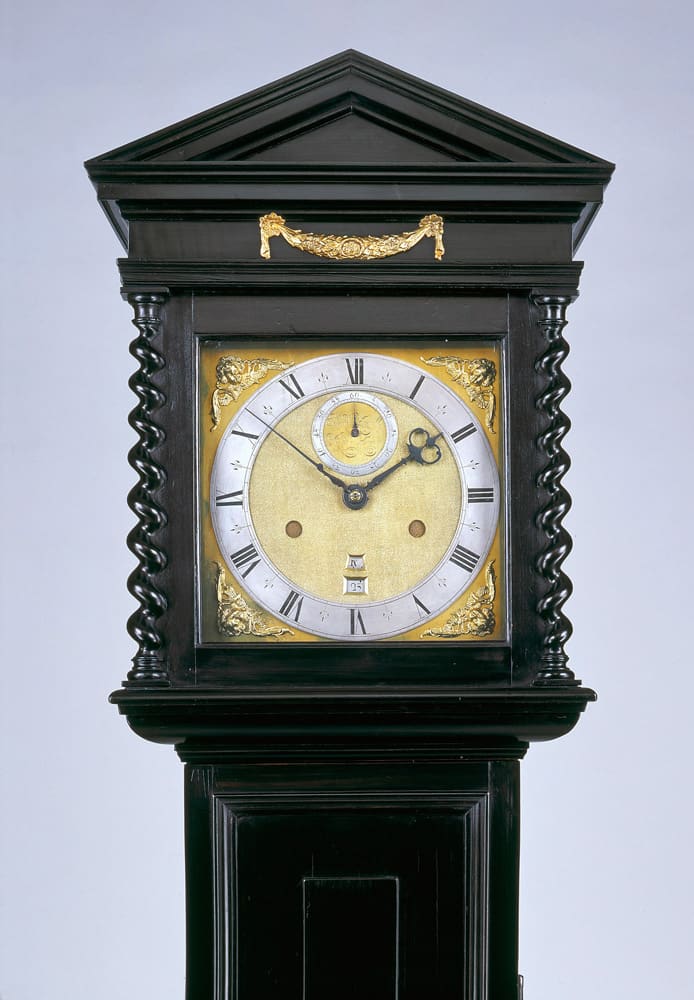 Joseph Knibb London walnut veneered hooded wall clock with walnut frets, seated on a carved walnut buttress, Huygens endless cord weight driving both the single hour hand movement and the hour strike. The dialplate is finely engraved with flowers in each corner as spandrels and in the centre, further flowers erupt from a vase. The result is a holistic little Joseph Knibb gem!
The 1670s was a pivotal period for astronomy and navigation. In March 1675, King Charles II appointed John Flamsteed as his astronomical observator, becoming the First Astronomer Royal and in August of that year the king laid the foundation stone for the Royal Observatory at the top of the hill overlooking Greenwich Park and the Queen’s House. These two acts in 1675 led ultimately to the longitude of The Royal Observatory becoming chosen as the Prime Meridian of the whole world! 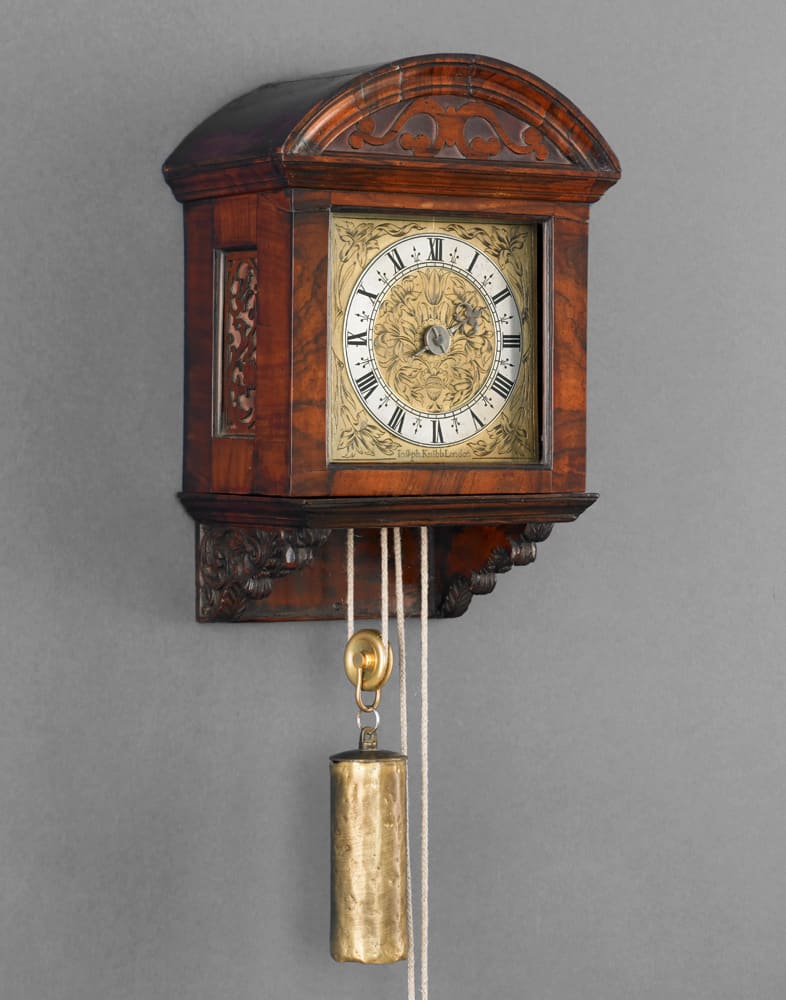 The Admiral Byng Knibb walnut veneered longcase was one of the earliest surviving clocks made by Joseph Knibb in London after taking over his cousin Samuel Knibb’s workshop, following Samuel’s death. His was probably one of the last cases of the Plague, still clinging on through the fleas of London rats, even after the Great Fire of 1666.
This clock has had a charmed life with little or no restoration to the case except new bun feet. Even traces of gilding on the original door hinges still remain. The movement too has had little restoration, even now retaining its original gilded shutters and maintaining power. Inside the trunk door are the details of the descent of the clock from the Byng family from the 1890s until it was acquired for the Peter Gwynn Collection. The clock shows Joseph Knibb’s complete grasp of form and function. 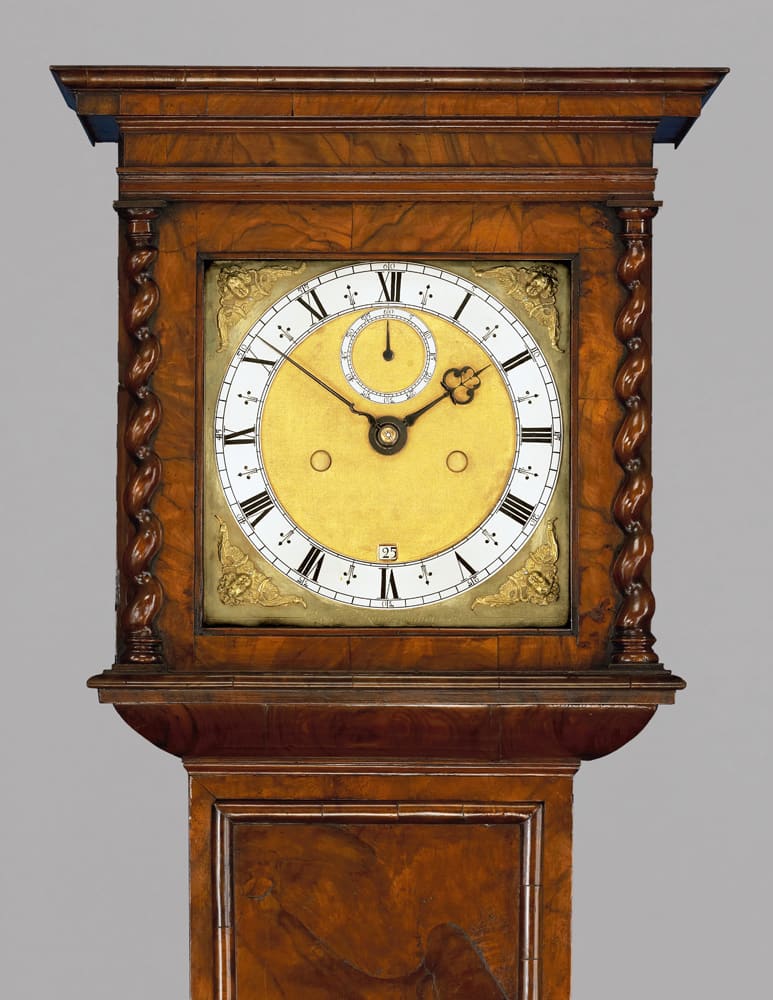 A miniature two train Joseph Knibb full grande sonnerie table clock. This appears to be the first of many full grande sonnerie striking spring table clocks made by Joseph and an early break from the architectural cases of the early pendulum clockmakers of London. The first English full grande sonnerie is the Fromanteel and East gilt cubic table clock (Exhibit 15), the second is the fishscale Chronos clock by Ahasuerus Fromanteel (Exhibit 37).
Yet, Joseph turns his back on the past. This compact black ebony veneered case has no architectural form. The the 30-hour going train has no fusee to even out the change of torque, instead using a direct spring tandem barrel. The change in torque is compounded by Joseph using the other end of this spring to drive the quarter striking train which goes out of phase before the pendulum stops the clock! 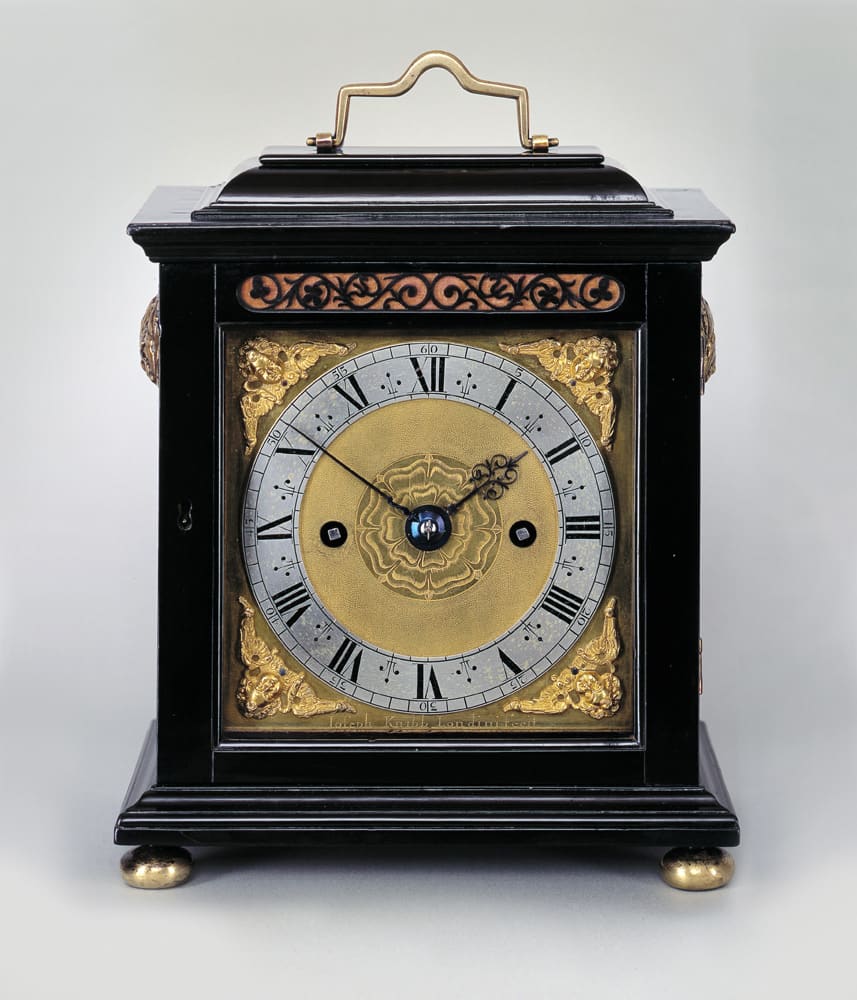 Joseph Knibb Phase I large Dutch striking tic-tac table clock, featuring a formidable sturgeon engraved on backplate. Ronnie Lee classified the development of the Knibb brothers’ spring clock case production and this clock was one of the first of this group, designed and made by Joseph in London – a Phase I. Ronnie included in his Phase I group the clocks that appear to have been designed and part made by Samuel, Joseph’s cousin.
Dutch striking gives you the exact time twice an hour – on the hour itself on a low bell and again, striking the following hour on each half hour on a high bell. 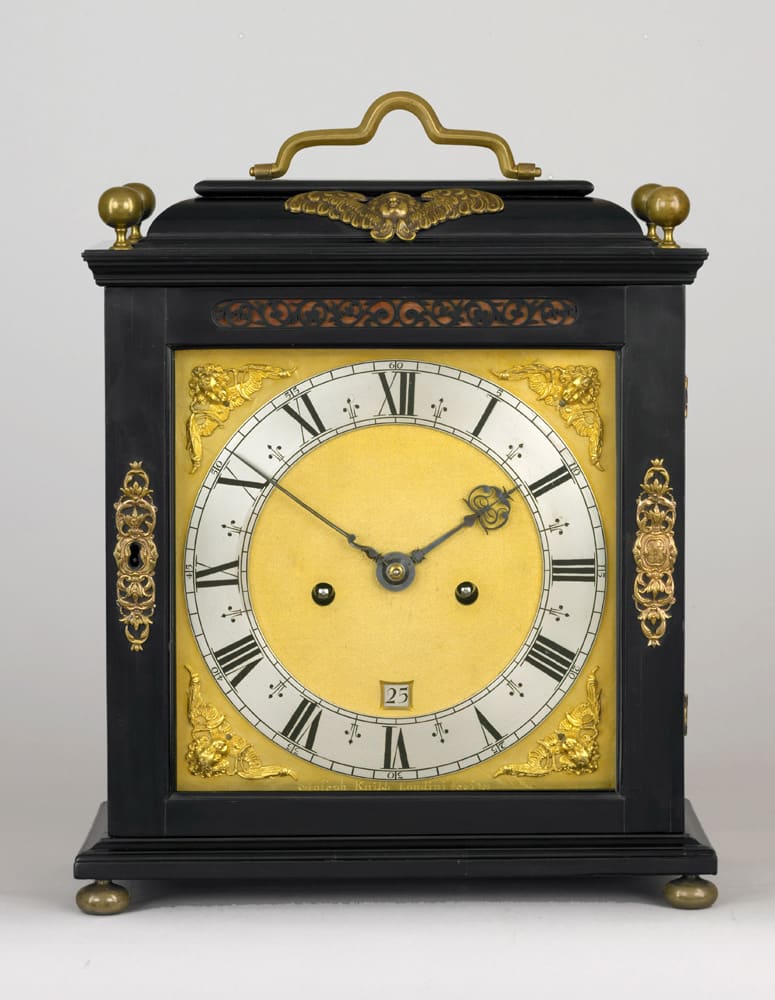 Just post WW2, the olivewood Tompion, was found in a junkshop on the Gloucester Road by Mr H Gadsby of 39 Hill St W1. He alerted Percy Dawson who recognised its importance and bought it for a few pounds.
Whilst the case is reminiscent of an architectural longcase hood with a low caddy, hidden beneath the top is a ring of holes on 3⁄4 inch centres – possible vestigial remains of a baluster gallery? Even more intriguing is the absence of half hour markers on the chapter ring. Yet on the back of the ring are a series of 12 sets of punching to enable the half hour markers to be skilfully removed – most probably by Tompion himself.
The whole movement is reminiscent of Samuel Knibb's style and may have lain unfinished in his workshop after he died, only to be finished by Tompion. 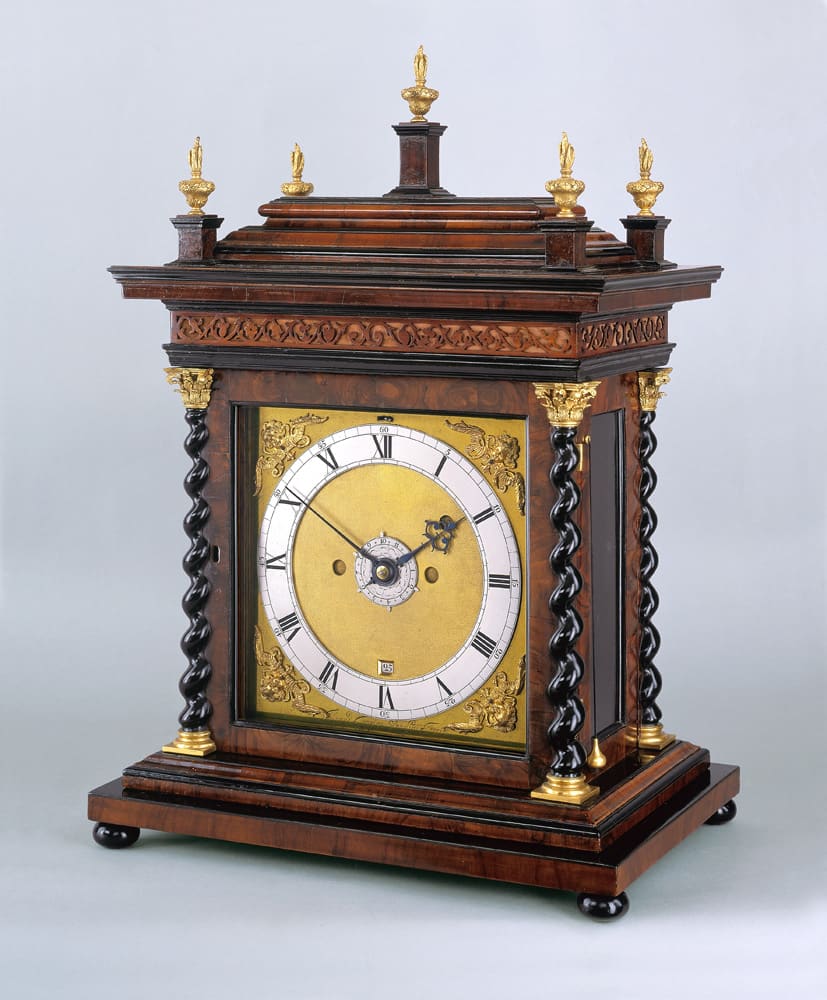 Henry Jones full grande sonnerie striking in a burr walnut flat-topped case with 3 trains behind a floral engraved backplate. The setup clicks have been used as ornaments with circular brass springs and the central going train click is incorporated into the Tudor rose used as the base for the detailed engraved central floral spray.
A matching Tudor rose is engraved on the centre of the hour countwheel. There are twin levers on either side of the dial to turn off the quarters and hour strike off during the night by lifting the hammers so the countwheels remain in synchronisation. Before rack striking was invented, a repeat mechanism was not possible.
The clock is one of the earliest 8-day spring driven full grande sonnerie clocks probably the next made after the Chronos Fromanteel – Exhibit 37. A similarly transitional flat-top cased Henry Jones hour striking table clock is shown in Exhibit 71. 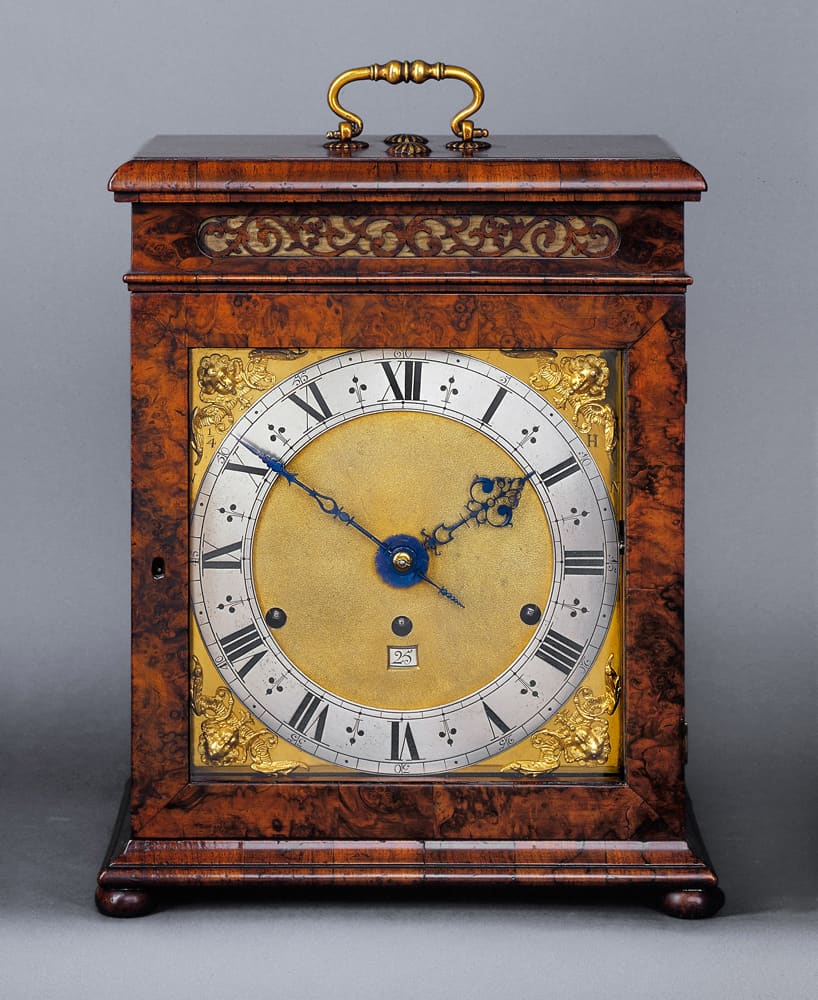