In the Middle Ages, the compass started to be used in European map making. This continued through the mid-1600s as land surveys became more important and accurate analyses were possible using a Plane Table. Initially, a baseline was established (say 100 yards) and its magnetic direction determined. The table was set up at one end and a corresponding scaled baseline was drawn across the paper. The direction of prominent objects was sighted and lines drawn on the paper with the magnetic bearing. The table was then moved to the other end of the baseline and the paper baseline correctly orientated. The same prominent objects were sighted and where the two lines crossed gave the scaled position of the objects. 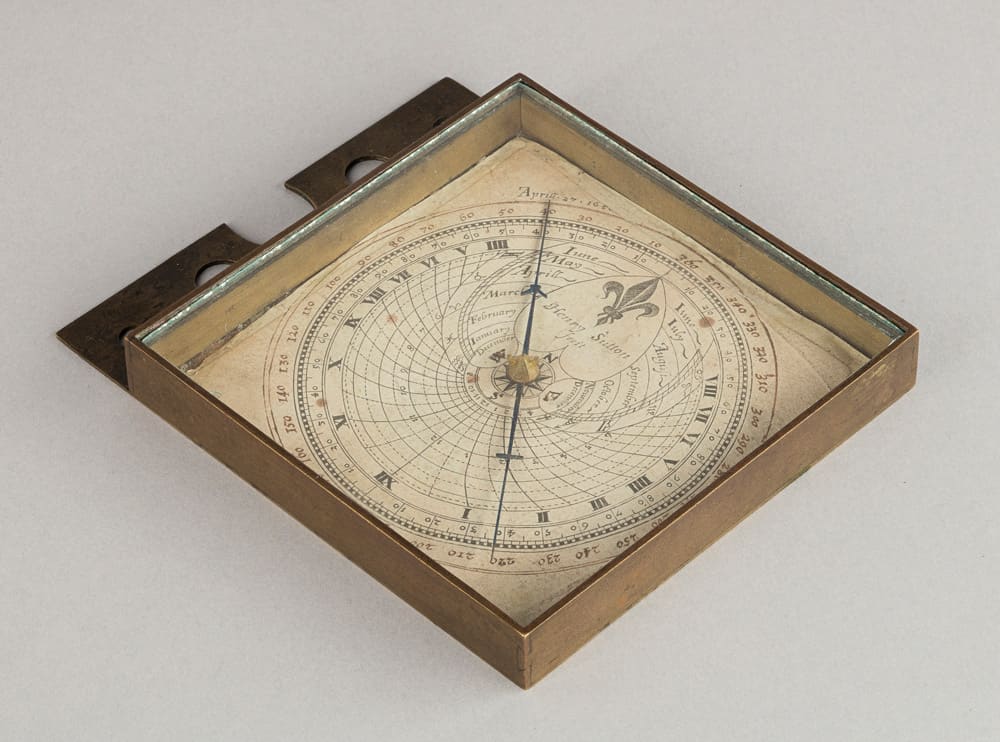 The obverse side has the printed signature and date together with the latitude 51°32’ – London, where its use was designed to show the signs of the Zodiac and 21 fixed stars on a grid marked by lower case letters. On the reverse side is a Perpetual calendar with Leap Years,
21 star coordinates and hour arc. Below are a series of trigonometric scales to aid the observer’s calculations.

1658 saw the start of the first advertised stage-coach services from London to Chester, Exeter and York and return. These journeys were planned to take four days, regularly changing horses. Though the state of the roads made this problematical with the driver often giving the passengers the option of getting out to push or spending the night where they were, rather than the chosen coaching inn. 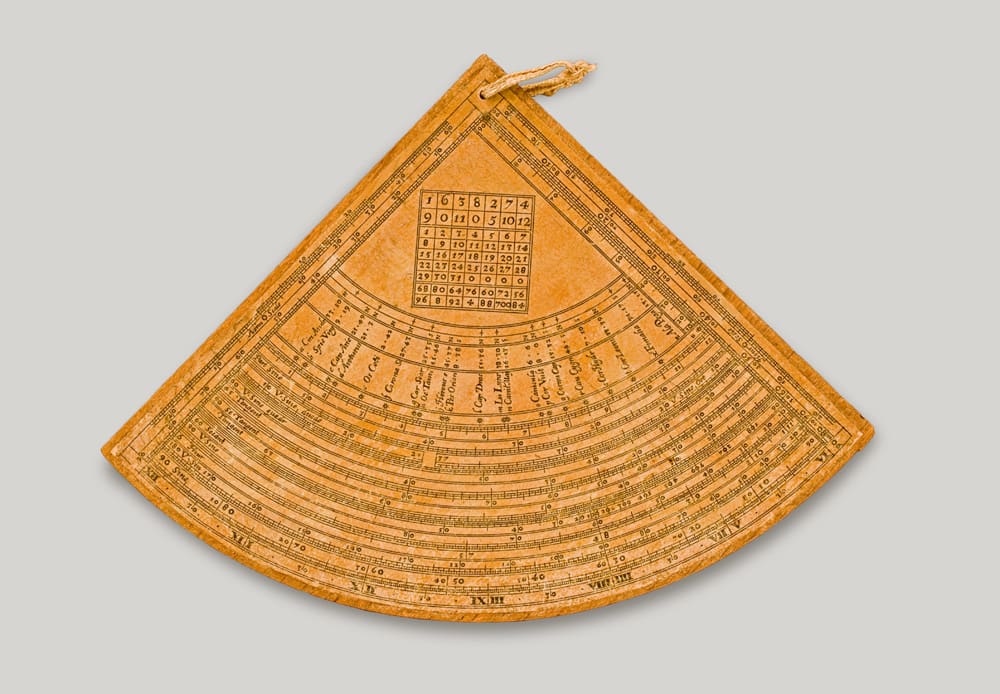 Dated 1664 Henry Sutton & Samuel Knibb Trigonometrical calculating machine made to a design of the surveyor Samuel Morland. It was made for drawing triangles of any desired form and shape for trigonometrical calculations when surveying. But this was a top-level production, intended for a princely patron; indeed the other instrument of Morland’s design by these two makers together was presented to Cosimo III de’ Medici, Grand Duke of Florence, so was this one made for the king?

The making of Morland’s general market instruments was entrusted to the clockmaker, Humphrey Adamson, who was granted premises at the Tower of London by the head of royal ordnance, Sir Jonas Moore. It was Moore who was to give Tompion his first commercial break, commissioning a turret clock for the Tower in 1674 and the famous astronomical timepieces supplied to the Royal Observatory, Greenwich in 1676. 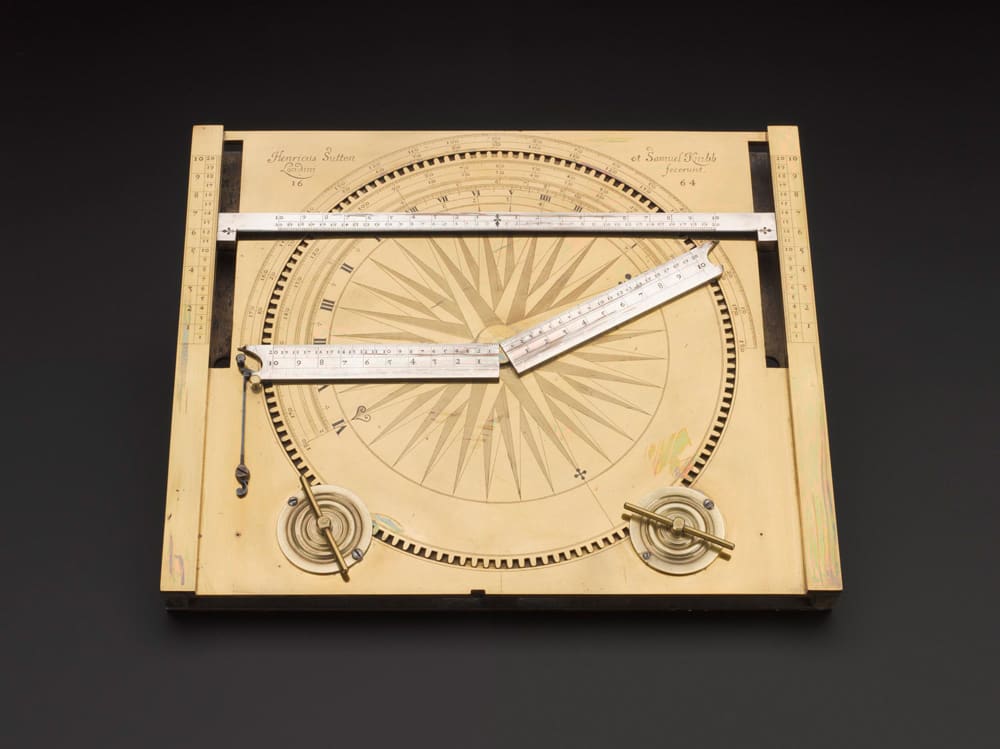 Ahasuerus’ sister Mary in 1646 married Andrew Prime, lantern-clock maker. Ahasuerus had a good knowledge of brass foundry casting, so production of the simple brass pillars and plates for this clock would not have been a problem; his later brass Corinthian capitals were of exemplary quality. This lantern clock is pleasantly proportioned, well finished and delightfully engraved.

Many early balance wheel clocks were later adapted by replacing the top-mounted oscillating balance wheel with a pendulum. Most English replacements hung the verge pivoted bob pendulum behind the clock next to the wall. In contrast, many Continental conversions had the pendulum swinging in front of the dial, as does this one. Ahasuerus made several trips to the Continent c 1650 so perhaps he had a customer for this clock? 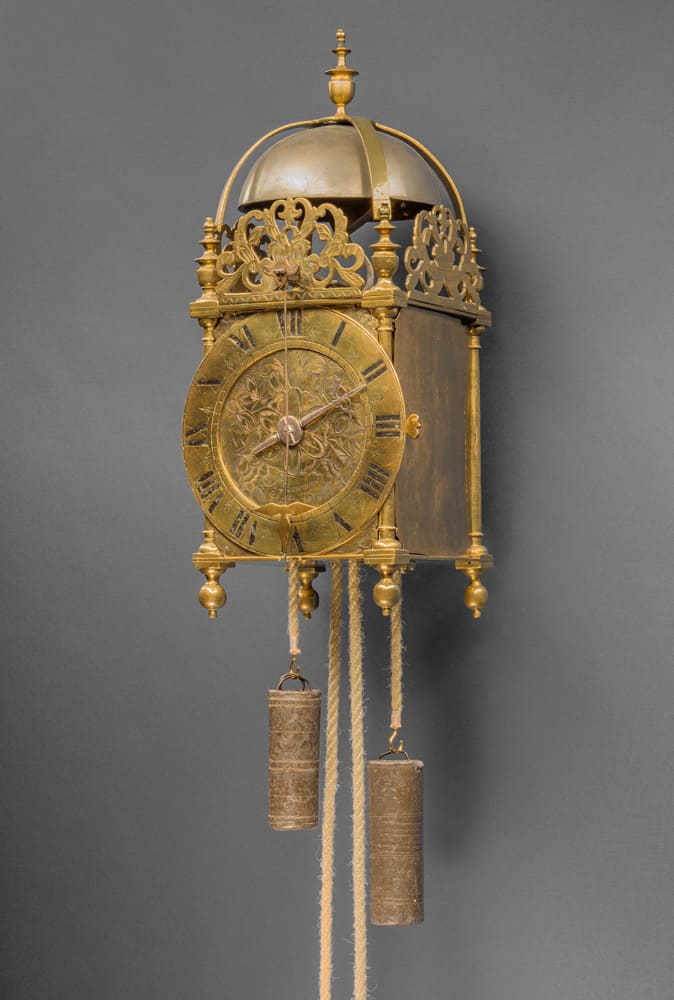 Pre-pendulum table clocks in general and Fromanteel’s in particular are exceptionally rare, so this clock is particularly difficult to date. Other similar cased horizontal table clocks were made by David Bouquet now in the Science Museum are dated 1600-1634.
After the execution of Charles I in 1649, Cromwell sold many of the King’s possessions which gave him the cash in the mid 1650s to order a complex astronomical clock from Fromanteel, but small scale possessions were not his style, and this might put the date of manufacture to before the Civil War, what date would you ascribe? 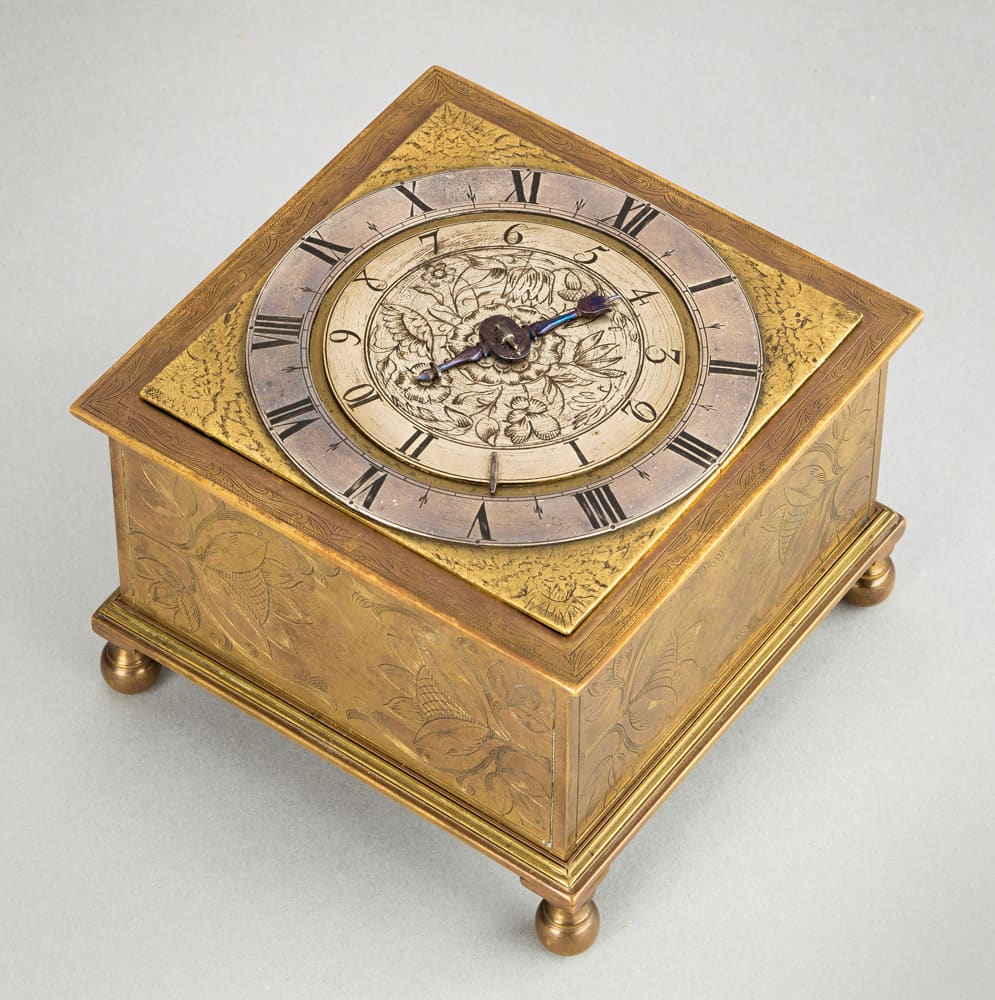 Looking at the signatures, Edward East & A Fromanteel Fecit, the first is gilded, the second cut through the gilding, added later. When East claimed that he made this cubic grande sonnerie gem, Ahasuerus decided enough was enough and added his own claim to have Fecit (made it)!
The wonderful gilded case engravings of Spring Summer Autumn and Winter are attributed to and probably engraved by Wenceslas Holler himself – Winter is almost identical to his engraving dated 1639. What date would you ascribe to this complex but beautiful gem? 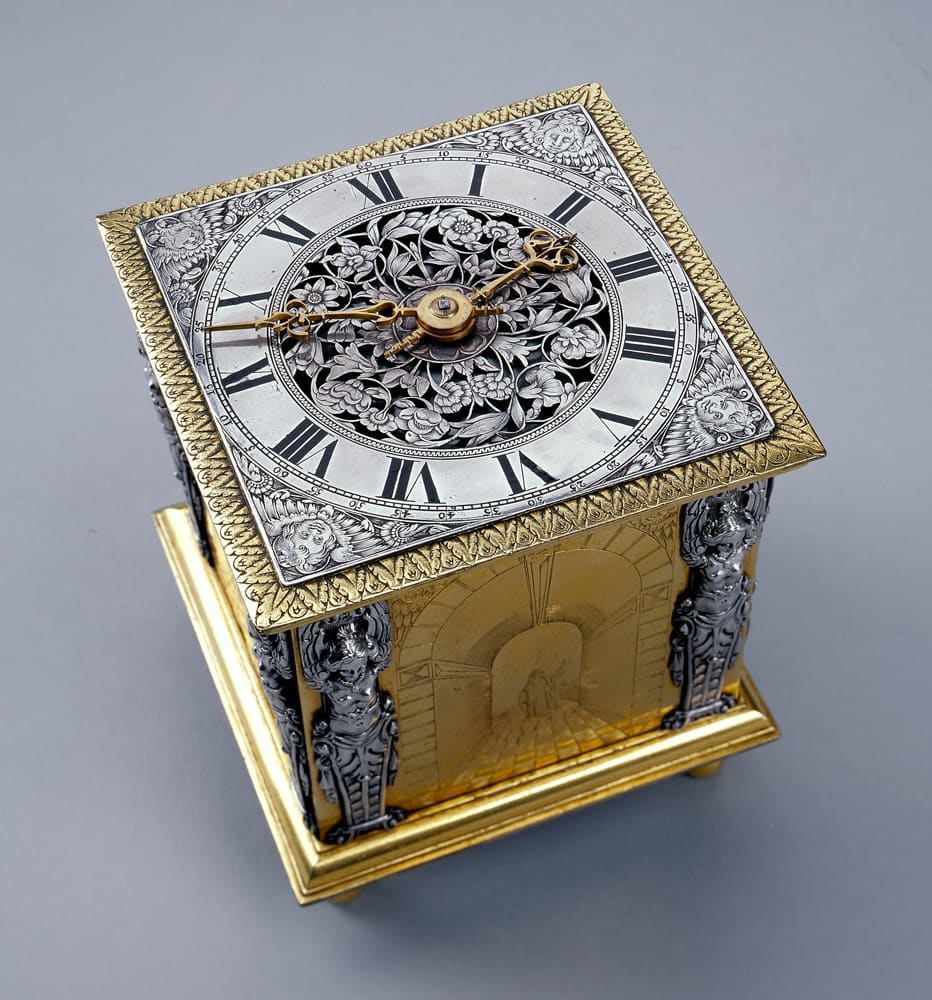 Single hand table clock made by Simon Bartram, born at the very end of the 1500s and apprenticed through the Merchant Taylor’s company in 1612. He rose through the Clockmakers Company to become their Master in 1650.
He appears to have worked with Jeremy Gregory as very little work signed by him
is known today. This consists of a few watches and this single little table clock which itself is also more a big watch than a conventional early pendulum clock. The plates are round, no fusees are used but watch type over-winding stopwork is provided.
Bartram was clearly associated with Fromanteel as he both gave surety for him in 1656, on Ahasuerus’s acceptance into the Freedom of the City of London, and then later took as apprentice his son Ahasuerus II Fromanteel (Freed in 1663). 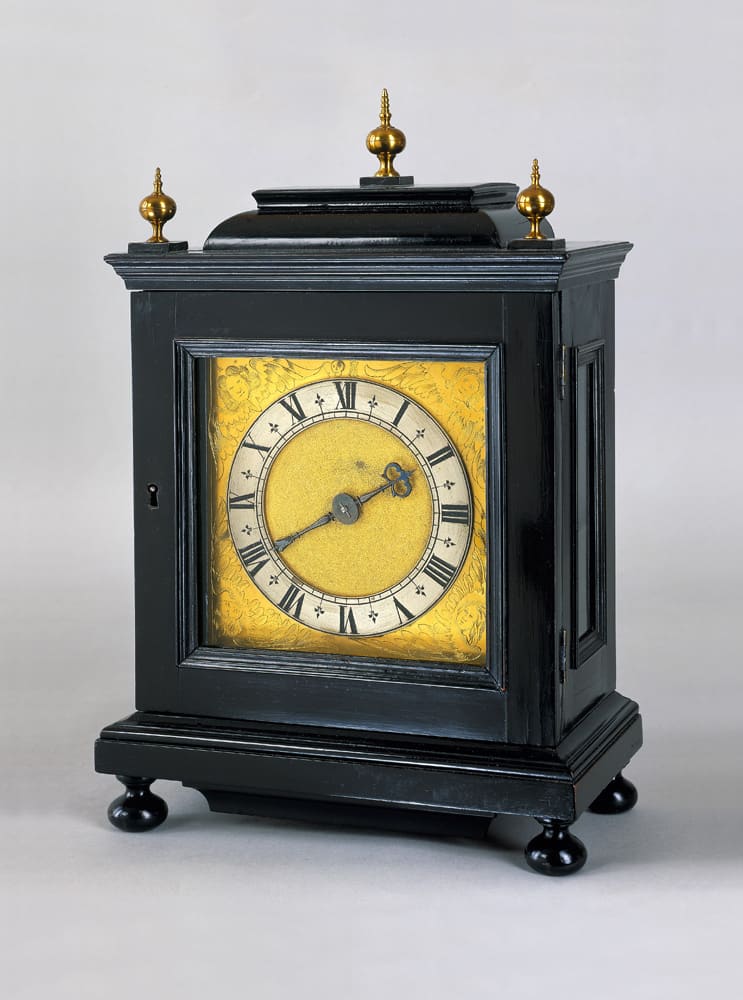 This Ahasuerus Fromanteel timepiece is the earliest pendulum spring clock with fusee.
The case, possibly designed by John Webb, showcased the new more accurate pendulum within and elevated the revelation of this technology to a form of theatre.
Keyholes are no longer visible but hidden from view inside a removable front drawer. Once the drawer is open, a secret catch can be accessed and used to open
the front door. In the doorjamb, another small catch allows the right-hand door to be opened. Further secret catches allow the back and left-hand doors to open. Ultimately, a full view of the movement from all sides can be revealed to a wonder-struck audience. 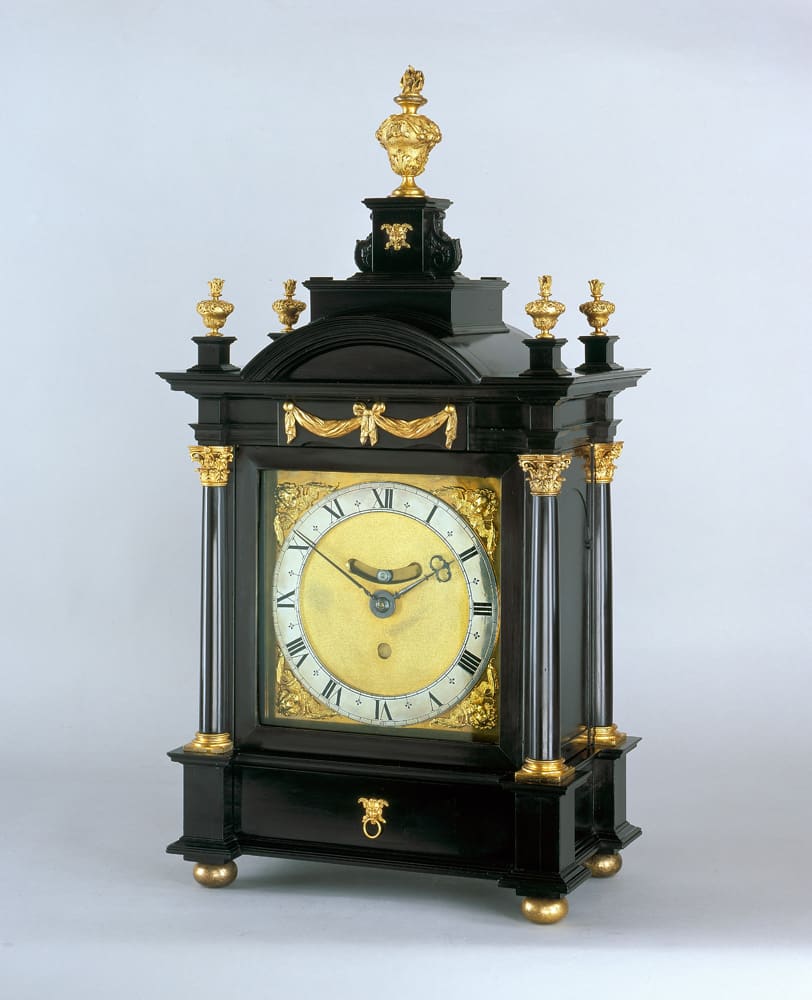 This appears to be the earliest English pendulum clock to survive in original experimental form without a fusee to even out the spring torque. There are no blanked off holes stopped off later. Most of the movement was originally mercury gilded. The initials EW 1687 are cut through the gilding of the cartouche at the top of the dialplate, so were added later.
Compare this train layout to Exhibit 27.
After first appearing in the bottom of a bag of rubbish to be thrown away from the home of 5th Baronet Sir Guy Theophilus Halswell Campbell OBE MC, the clock was acquired by Ronnie Lee for the Peter Gwynn Collection. Sadly, this clock was one of two stolen by a sneak thief and only surfaced again in Amsterdam 10 or so years after Peter had passed away. 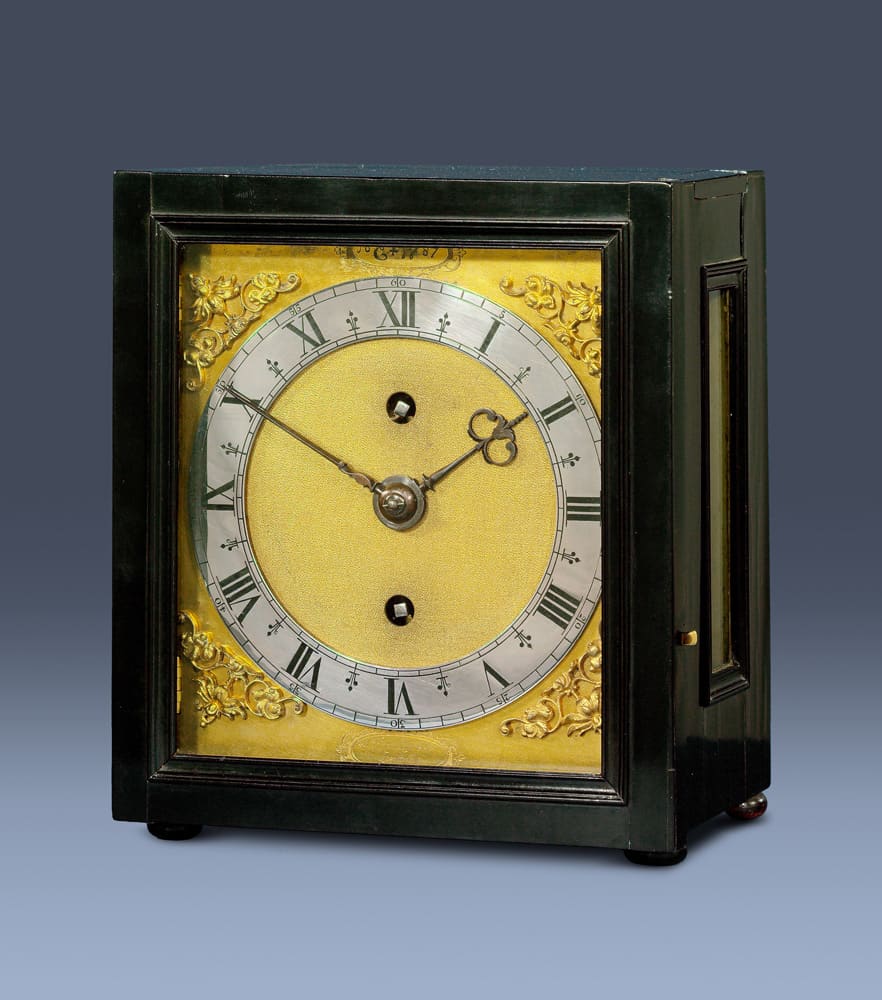 This exhibition aims to prompt further thought on the dating of Ahasuerus Fromanteel’s earliest pendulum clocks. This simple looking clock is one of the earliest made by Ahasuerus with a pendulum and may even have been produced before his son departed for Holland to teach the Dutch clockmaker of The Hague how to make pendulum clocks. The question is still open... What do you think? 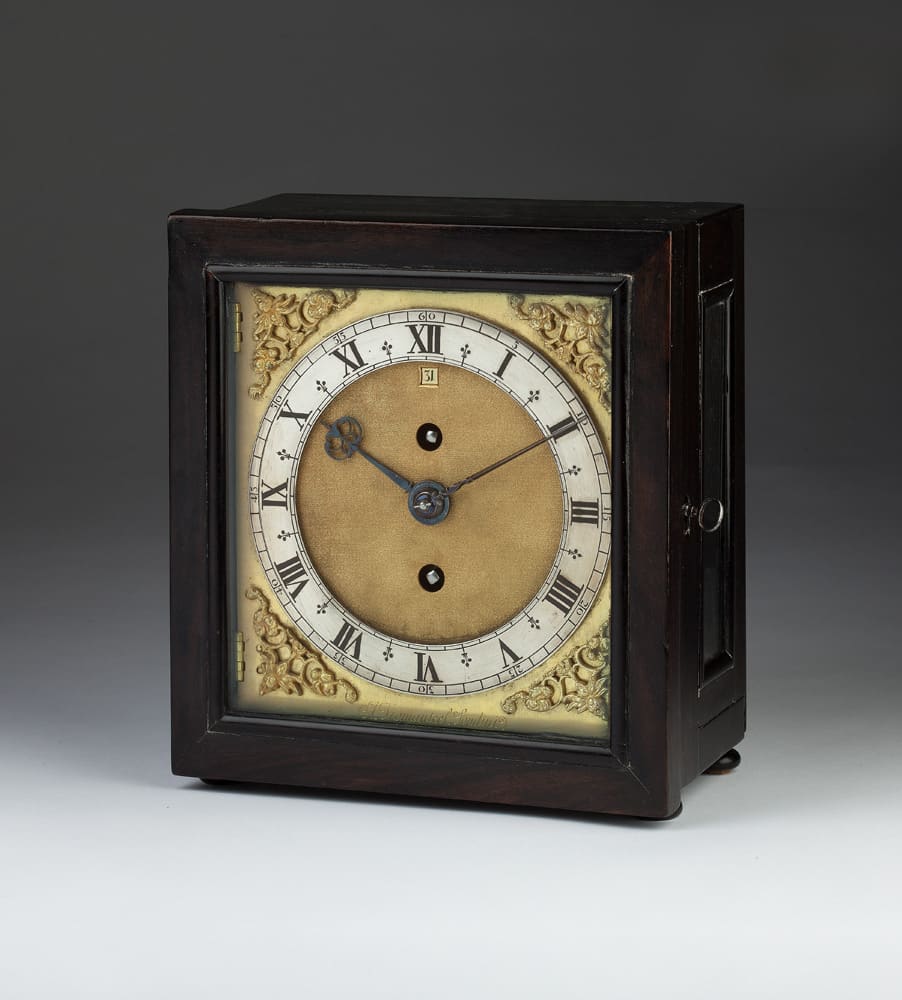