This is one of the earliest watches with a seconds indication. About this period longcase clocks were easily able to have a seconds dial by using a seconds swinging pendulum and an extension through the dialplate of the anchor escapement arbor for the second hand. To provide a second hand on a watch was a revolutionary unique selling point!
The scene on the dial of a flying Cupid and a reclining Venus is a recurrent classical painting theme but does not appear to be a copy of any particular artist. The bounteous lady on the rate adjustment cover is presenting the World's abundance whilst Father Time in the seconds dial is taking those worldly goods away with him across the Styx! 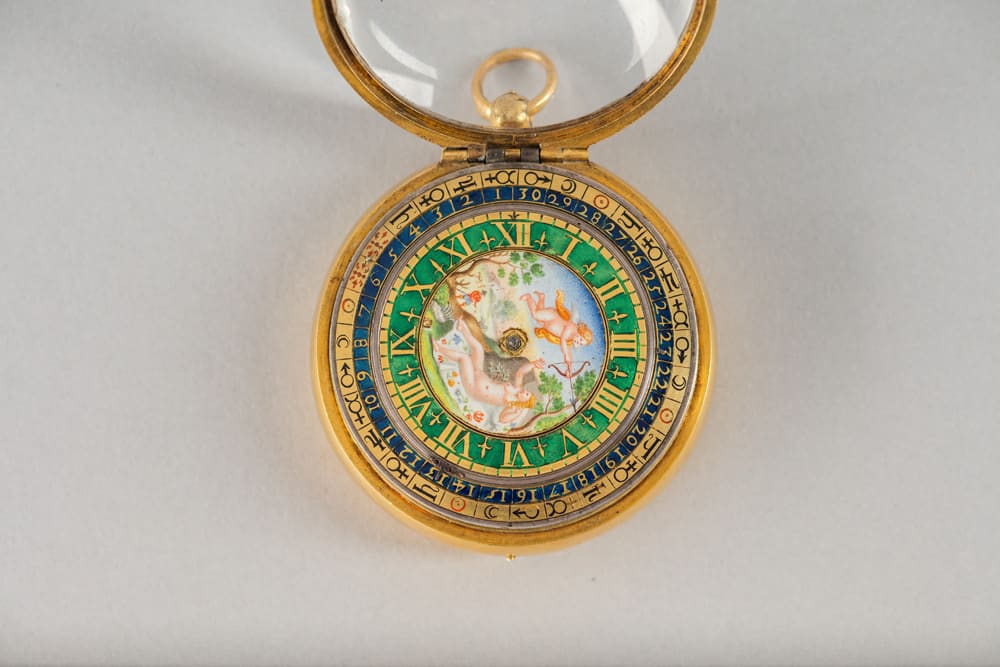 This ebony veneered architectural table clock, signed Edward East Londini on the backplate, has an old-fashioned look about it when compared with the crisper, more detailed, ebony mouldings on the similar aged clock by Fromanteel (Exhibit 37). The movement design is also less refined, with no centre wheel, but the ‘floating’ motion work to drive the hands giving them a loose feel. The springs are narrower and thicker than those used by Fromanteel. The baluster pillars are riveted to the front plate, and the backplate is pinned with these visible pins accentuating the early look, as this habit derived from earlier (pre-pendulum) table clocks.
It is thought that East led the traditionalists following this design such as his apprentice Henry Jones, together with John Hilderson and Edward Stanton, all of whom are represented with similar ‘East School’ table clocks in Exhibits 44, 45 & 63 etc. 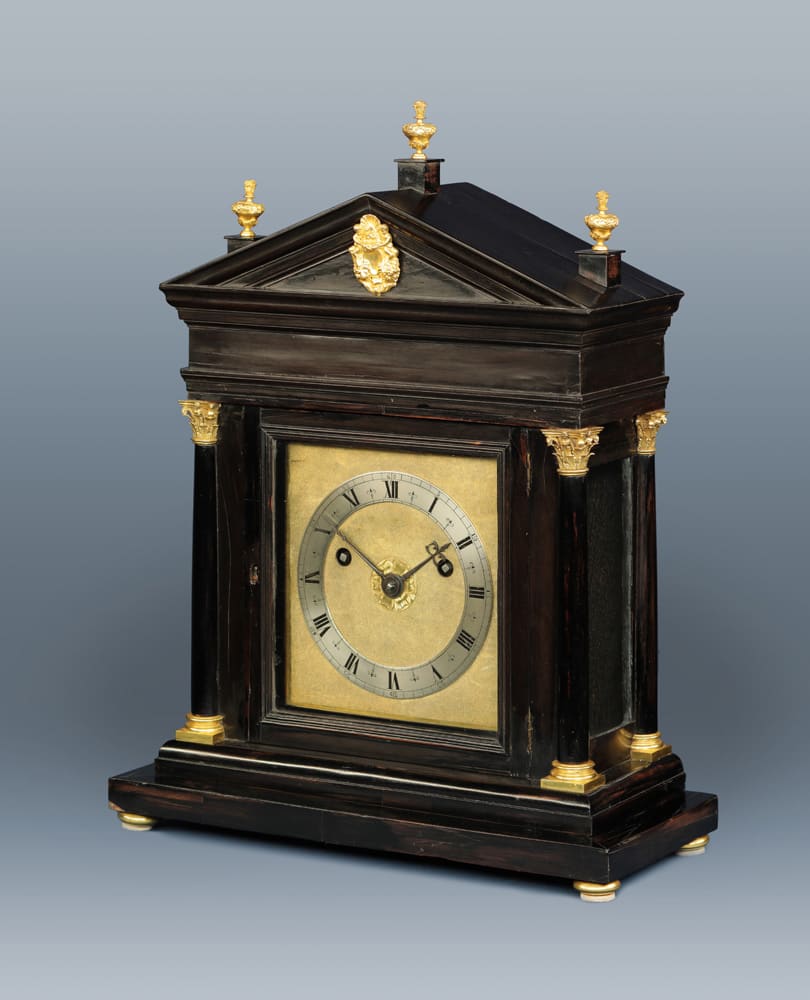 John Hilderson spring night clock is unique in two ways. Unlike most night clocks, John not only provides a rotating night-time dial showing two hours in a small aperture but also below is a small daytime chapter ring with an hour and minute hand, with a silvered alarm disc in the centre. Also most night clocks have a painted dial but this one has a beautiful sweeping floral engraved dialplate with three Greenman faces worked amongst the flowers.
Hilderson is another member of the ‘East School’ with his narrow but thick springs mounted between plates spaced by asymmetric baluster pillars riveted onto the frontplate and pinned on the backplate. He appears not to have been a member of the Clockmakers’ Company and it is highly likely he died in the Plague as no later clocks by him are known. 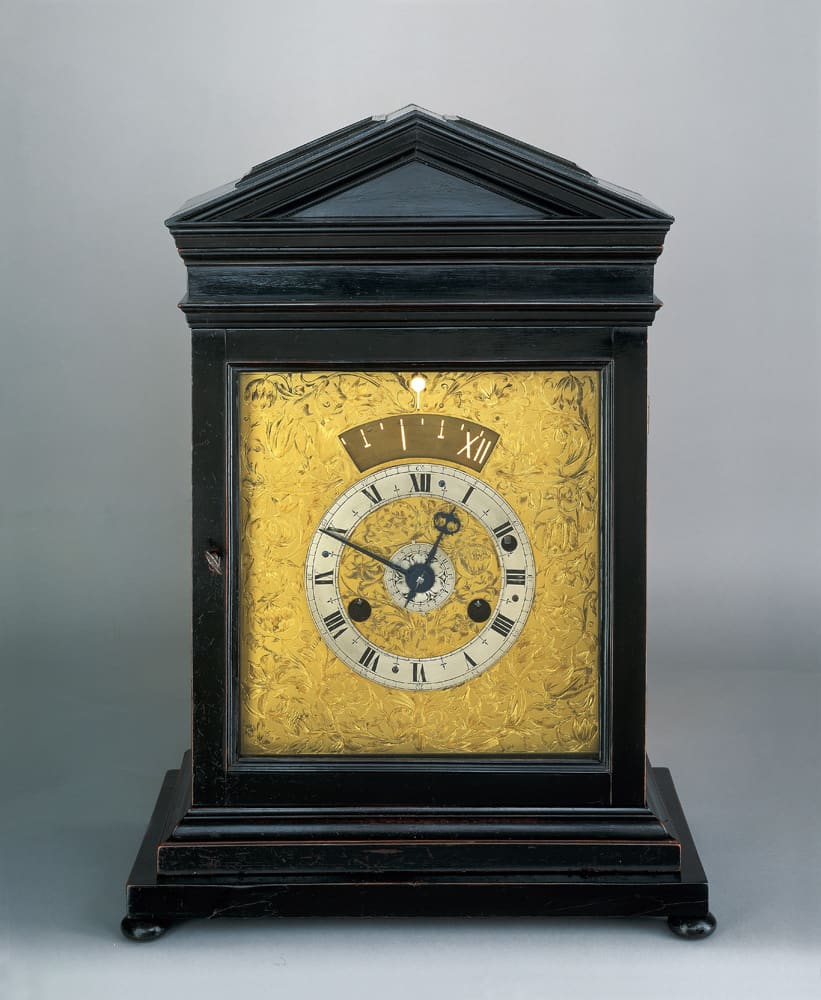 This is a fine example of East School construction of an ebony veneered architectural table clock signed on the backplate John Hilderson Londini Fecit. It has all the production attributes in the movement expected from the ‘East School’. The high winding hole position comes from the large diameter spring barrels and the large diameter great wheels on the fusees. The case has a narrow, rather pinched look without the usual ebony pillars with with giltmetal Corinthian capitals and bases.
The dialplate has an engraved Tudor rose at the centre and is surrounded by exquisitely beautiful punched matting of the highest quality, looking like shot silk as the light changes. There are no spandrels nor a surround engraving of the dial nor a signature on the dial. The backplate has a bold curved signature probably engraved by the same hand as the East, Exhibit 42. 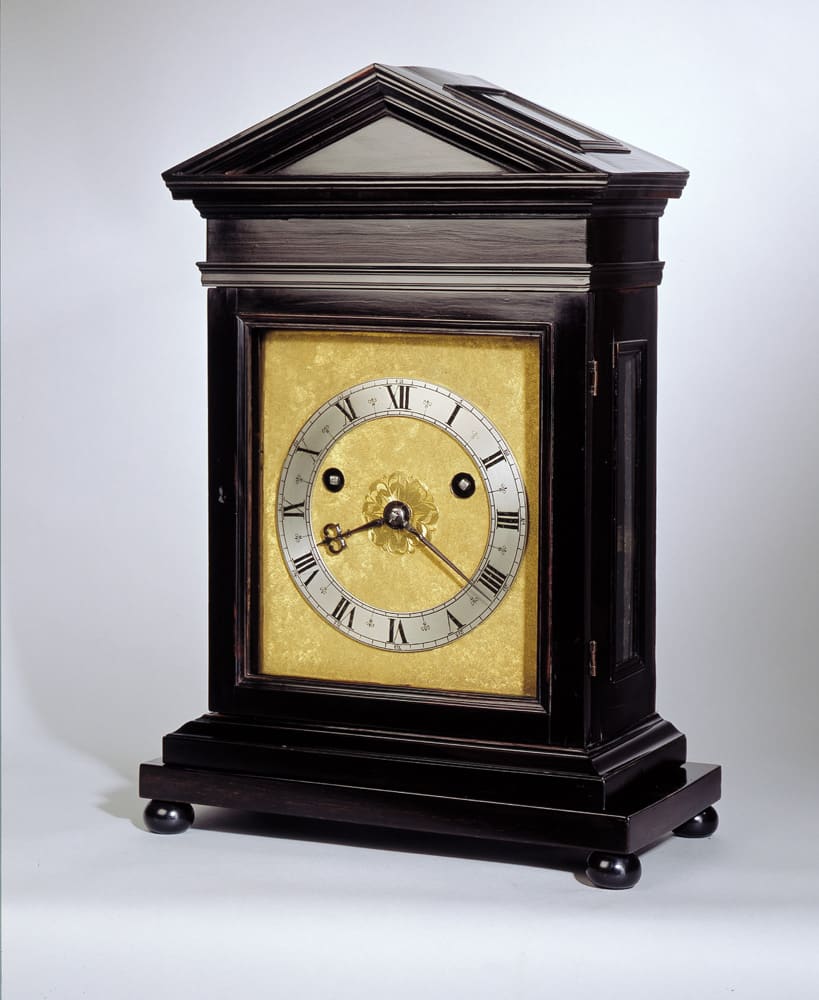 Edward Stanton was apprenticed to Edward East so his architectural full quarter striking table clock is interesting as the baluster pillars are riveted to the backplate following the Fromanteel design. The trains run for just 31⁄2 days and it stands on a turntable base with a polished gilt dial with the central Tudor rose. All the architectural details are in place with the overhanging architrave and frieze to accept columns with capitals and bases, but, oddly, there is no visible sign that these were fitted. This results in giving a slightly unfinished air about the case. Moreover, to let more sound out of the closed case, two sound holes have just been drilled in the back of the pediment!
Perhaps the tumultuous previous couple of years of the Plague in 1665, followed by the Fire in 1666 lead to some cost and corner cuttings! 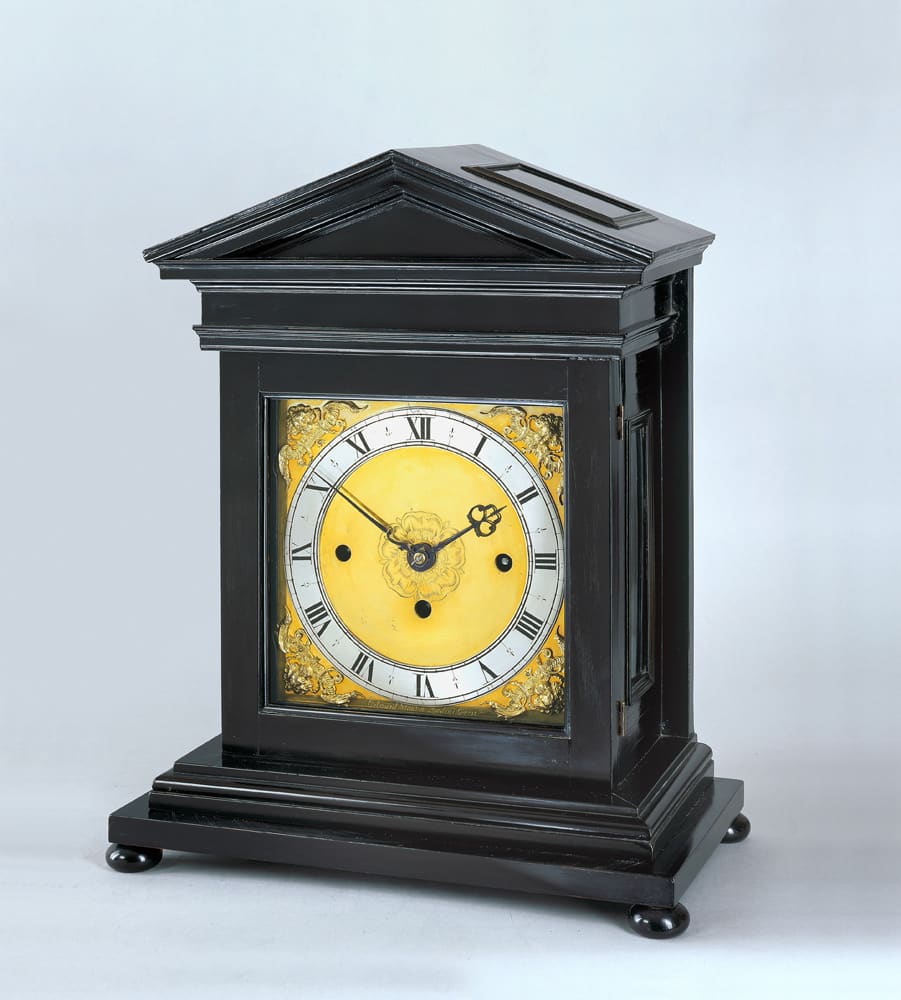 This spring table clock was made by Samuel Knibb, a talented clockmaker who died in about 1670 in his mid-forties. Only five clocks signed by Samuel are known to have survived and all of them (Exhibits 47, 49, 51, and 56) are displayed together for the first time in this exhibition. The dial is beautifully engraved with a Tudor rose in the centre and flowers (a dog rose, tulips, lilies and daisies) in the corners. Can you see the hovering dragonfly in the top left corner? This clock was recently discovered in America where it had been handed down in the family from one Captain James Avery (1620-1700) who emigrated to America from England with his father in 1630. 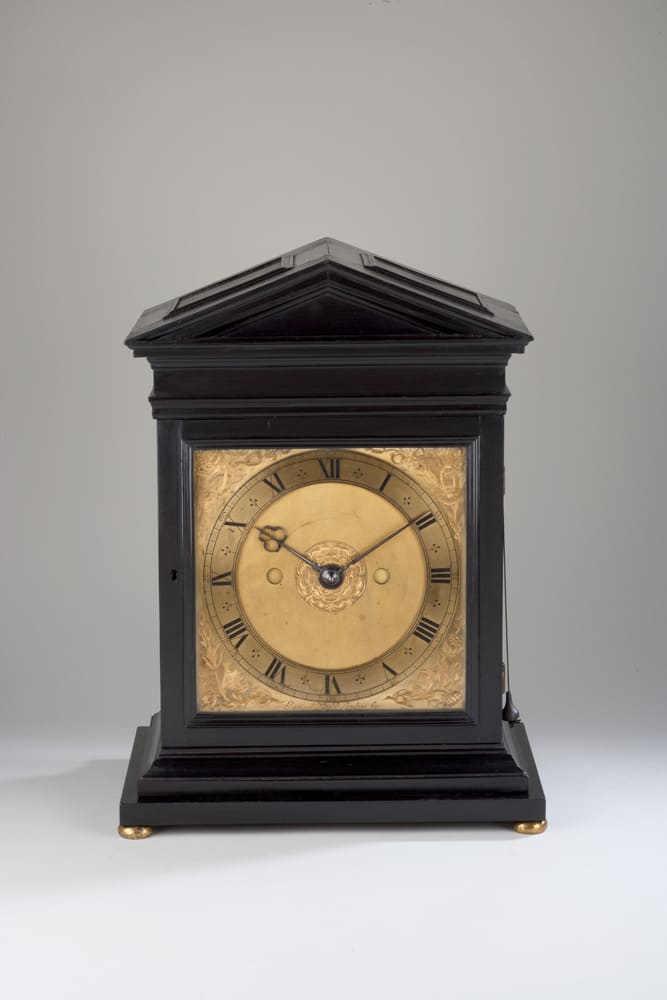 Samuel Knibb’s London career was short, from c1663 (when he joined the Clockmakers’) until his death around 1670. He must have had a close working relationship with Ahasuerus Fromanteel; indeed it seems he was an outworker, for there are too few surviving clocks (only 5 in total) by him to sustain a career and his clocks (as this one) closely follow Fromanteel’s. Samuel’s death not only caused Joseph Knibb to come to London, in succession to Samuel’s business, but may also have prompted Tompion to set up in business on his own in c1671. 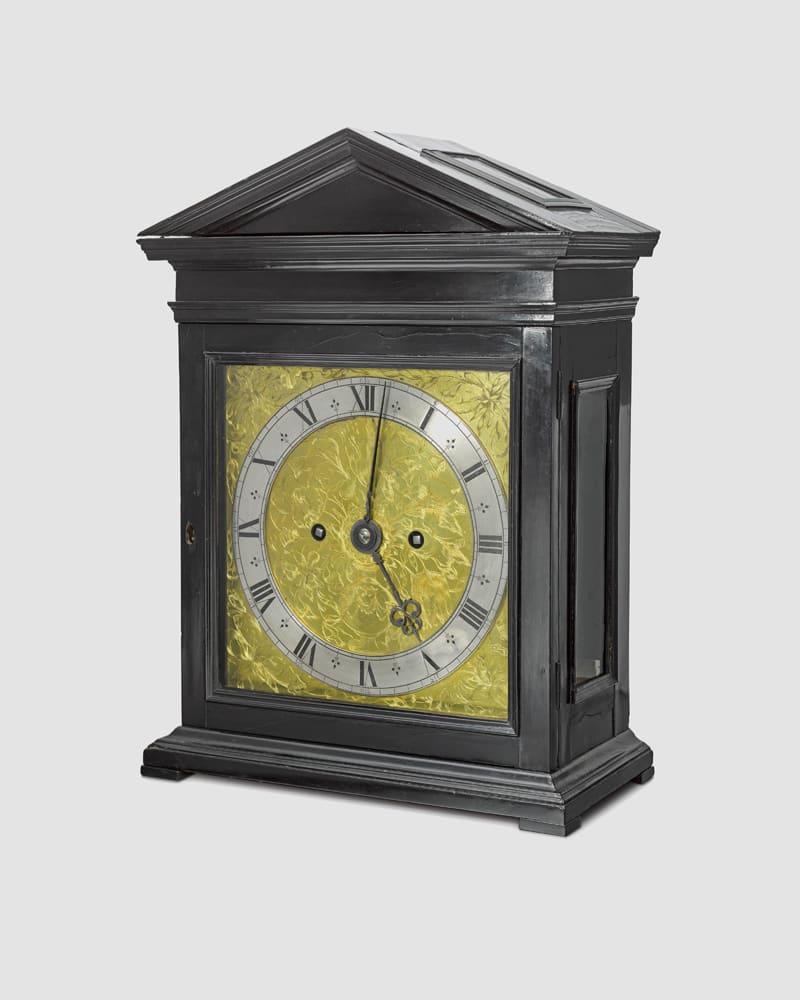 A harlequin pair to the other ‘cupola’ clock by Fromanteel’s associate, Samuel Knibb (Exhibit 49), the cases of both would have been designed by the classical architect, John Webb, the first ever professionally trained English architect. The case is in the form of a Classical temple to the great scientific advance that was the pendulum clock and the aid that it gave to the advancement of astronomy.
It is likely to have been ordered and made just before the Great Plague and Great Fire, after which Ahasuerus quit London for Amsterdam, running a clock business there for 10 years, only returning in 1677. 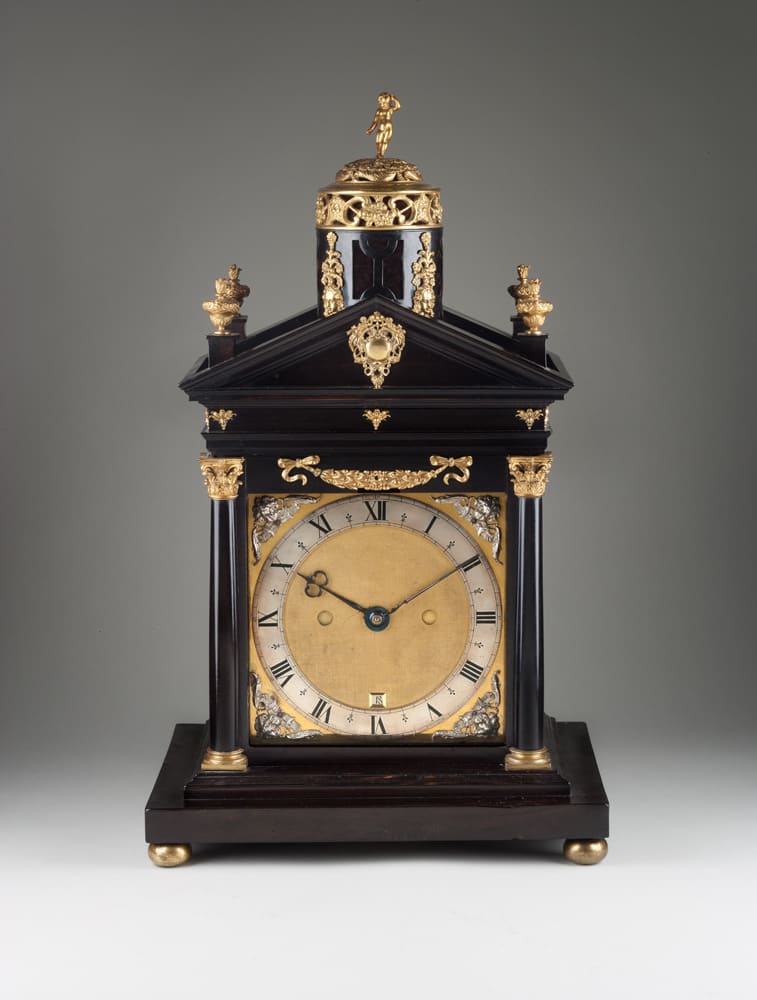 The Samuel Knibb cupola table clock was produced by yet another clockmaker about whom we know very little. Samuel Knibb (1625-c1670) was the son of a yeoman of Claydon, Oxfordshire – John Knibb, uncle to Joseph and John the clockmakers, the cousins to Samuel. Nobody has been able to find where Samuel was apprenticed but he was admitted to the Clockmakers’ Company in 1663. Only five clocks are known, made by Samuel. All are of the finest quality.
There is another very similar cupola clock made by Fromanteel (Exhibit 48) in a slightly smaller case. Both clocks are made to be admired on all four sides. This Knibb has custom designed movement plates with integrated extensions for the bells, which fit up into the cupola. 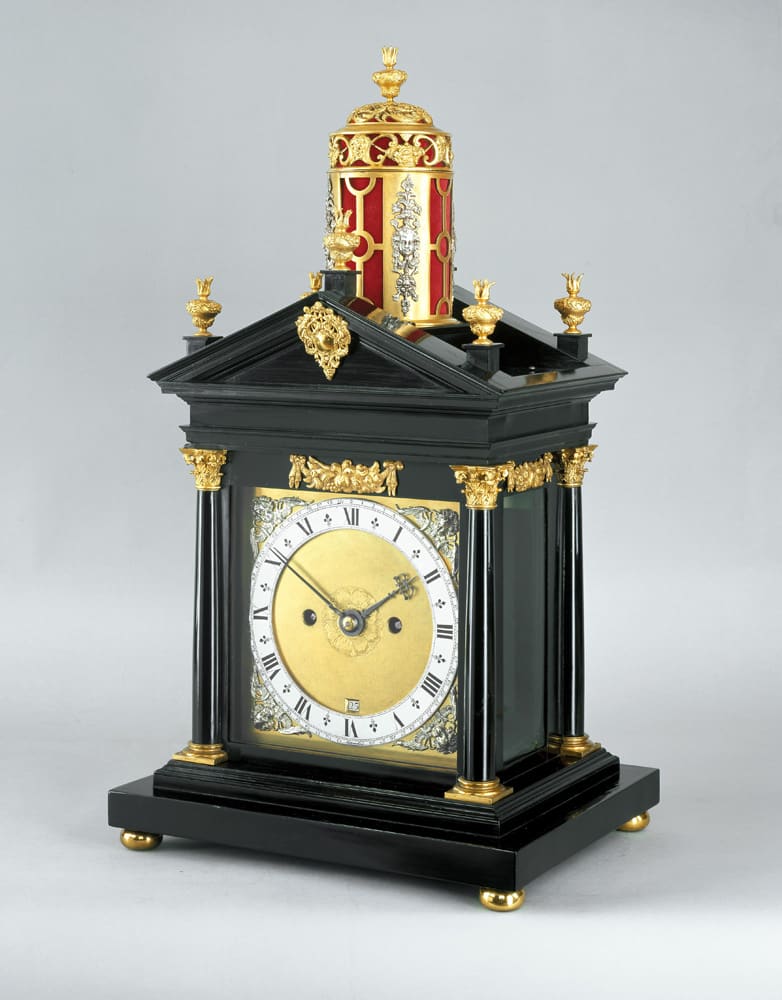 Signed Ahasuerus Fromanteel this ebony veneered longcase clock has a pedimented hood with gilt brass mounts of a design regularly used by Fromanteel but take a close look at the winged cherub spandrels which, on this clock, are cast in solid silver. They are perfect miniature sculptures in their own right with finely chased curls and feathered wings rendered in exquisite detail. If you want an even better view then just take a look at the Exhibition logo which is based on a photograph of one of these very cherubs. 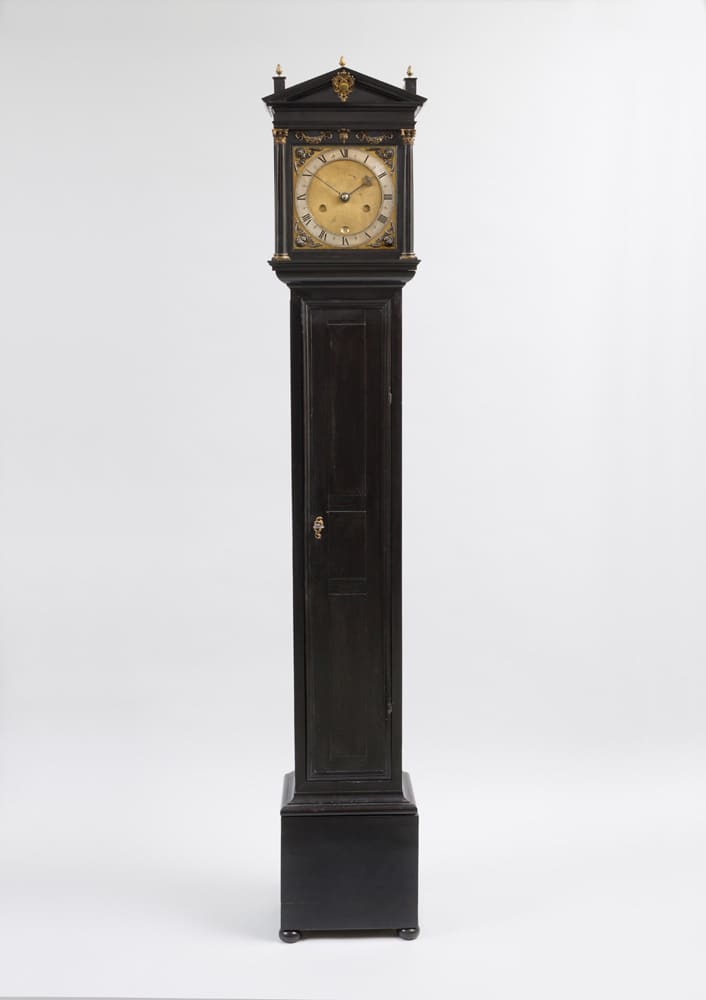