Miniature longcases are extremely rare and this one made by Joseph Knibb is one of only three by this maker known today. The clock has a skeletonised chapter ring with every minute individually marked and is just 5’4” (1.64m) high. Perhaps the most striking feature of the clock is its case veneered in olivewood, walnut, ebony and boxwood in an unusual design of highly stylised marquetry flowers vaguely reminiscent of 1960s’ psychedelia! Two other standard sized longcase clocks (one by Joseph and the other by John Knibb of Oxford) exist which have similar marquetry. 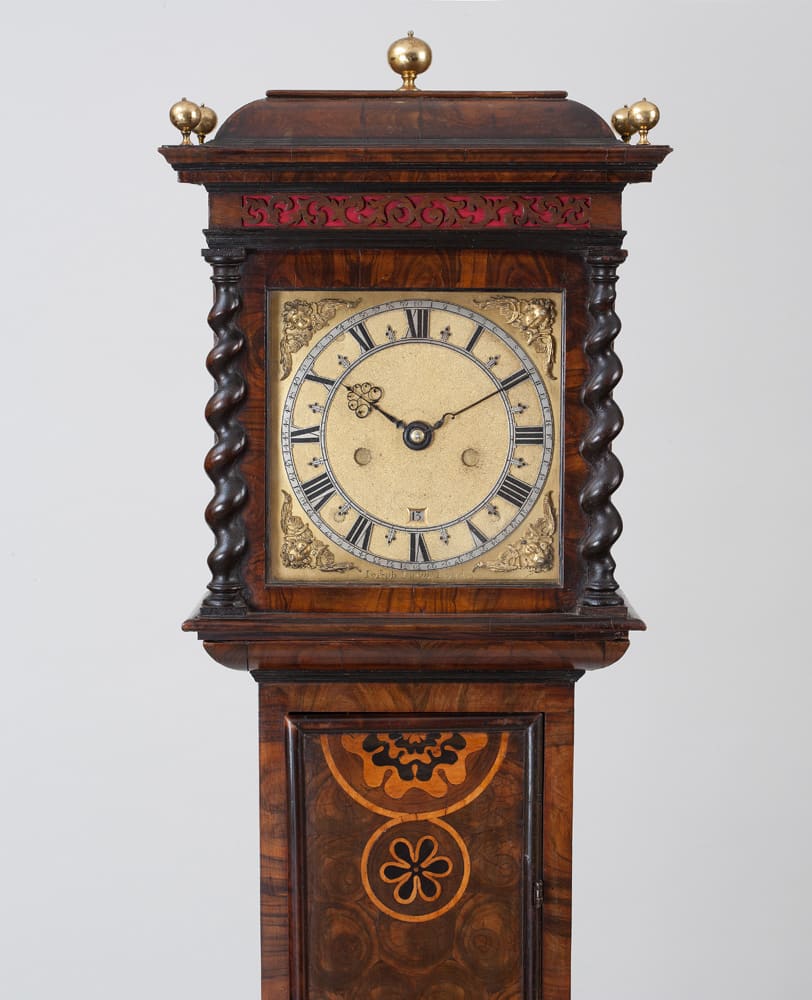 Joseph was certainly the maker whose clients were offered the most choice in types of striking table clocks. In the Exhibits here, there are examples of a timepiece with pull quarter repeat Exhibit 103, Dutch striking Exhibit 68, quarter striking 2 train Exhibit 79, two train grande sonnerie Exhibit 67, three train grande sonneries Exhibit 86, Roman striking Exhibit 85 and this clock with double six full grande sonnerie striking.
In the early afternoon and small hours of the night, the clock strikes as a normal full grande sonnerie clock. However, at 7am and 7pm the sequence starts again by striking one! This sequence continues and ends by striking six at 12am and 12pm. Basically, Joseph assumes you will always know the time within six hours! It’s a cost reduction! 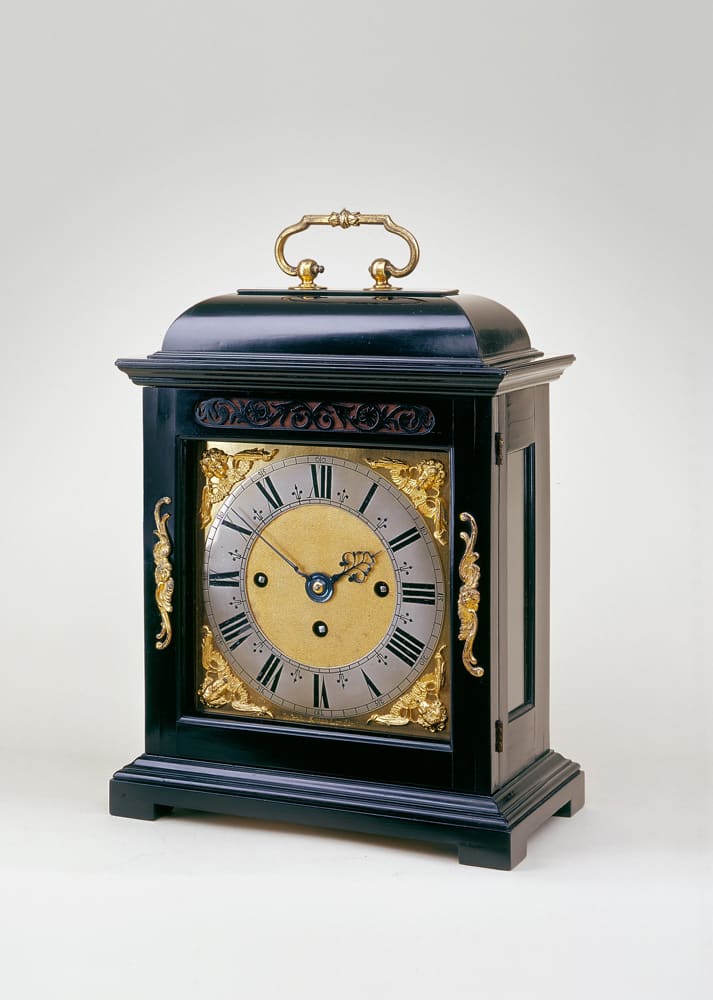 John & Joseph Knibb ebony Phase III spring timepiece with pull quarter repeat, found with a Joseph Knibb token. This timepiece has John Knibb Oxon Fecit engraved on the dial but the backplate has Joseph Knibb London Fecit covered with an arched engraved gilt plaque John Knibb Oxon Fecit. It is likely that the token was exchangeable for goods such as food, local to Joseph’s workshop.
This timepiece certainly shows that the two brothers cooperated together but gives no real clue as to whether London was a main supplier to Oxford or vice versa. Perhaps the fact that John had up to ten apprentices, showed that Oxford supplied at least some parts to London as Joseph in London had to conform to much tighter regulation from the Worshipful Company of Clockmakers. 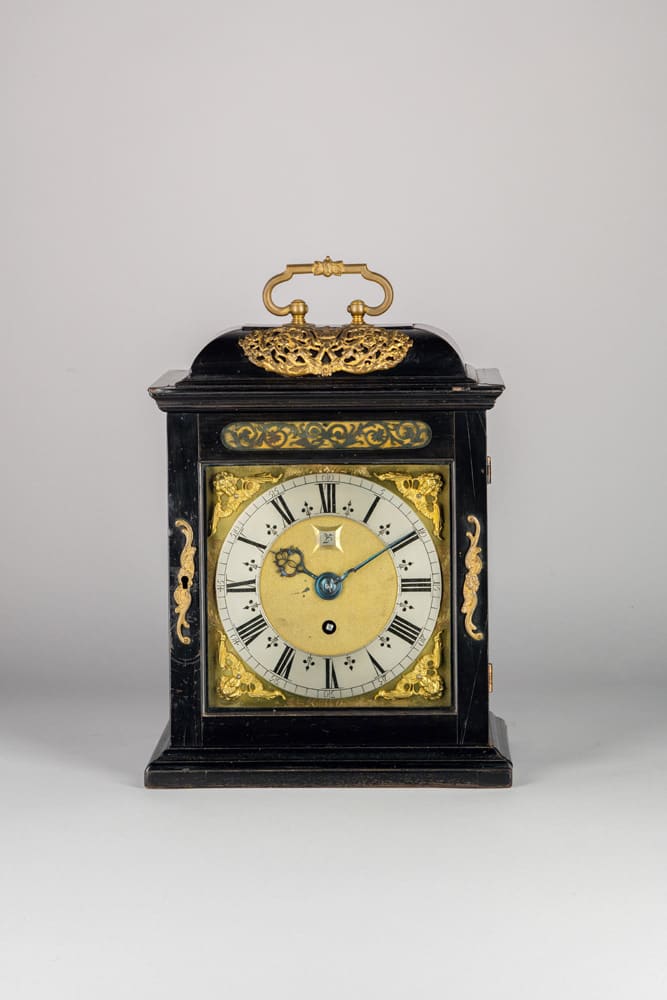 Walnut and marquetry pull-quarter repeating longcase by Daniel Quare is special with not only marquetry panels on the front of the case but also on the sides of the hood, trunk and base. The case is mounted on 4 bun feet and the door has a lenticle to view the swinging seconds pendulum. The month duration movement is also special with a rate adjustment and strike/silent dials. There are only a small number of longcase clocks with a pull quarter-repeat feature. Supposedly, a repeating longcase by another maker remains in its original location, together with a series of pulleys up to a bedroom pull-repeat cord. 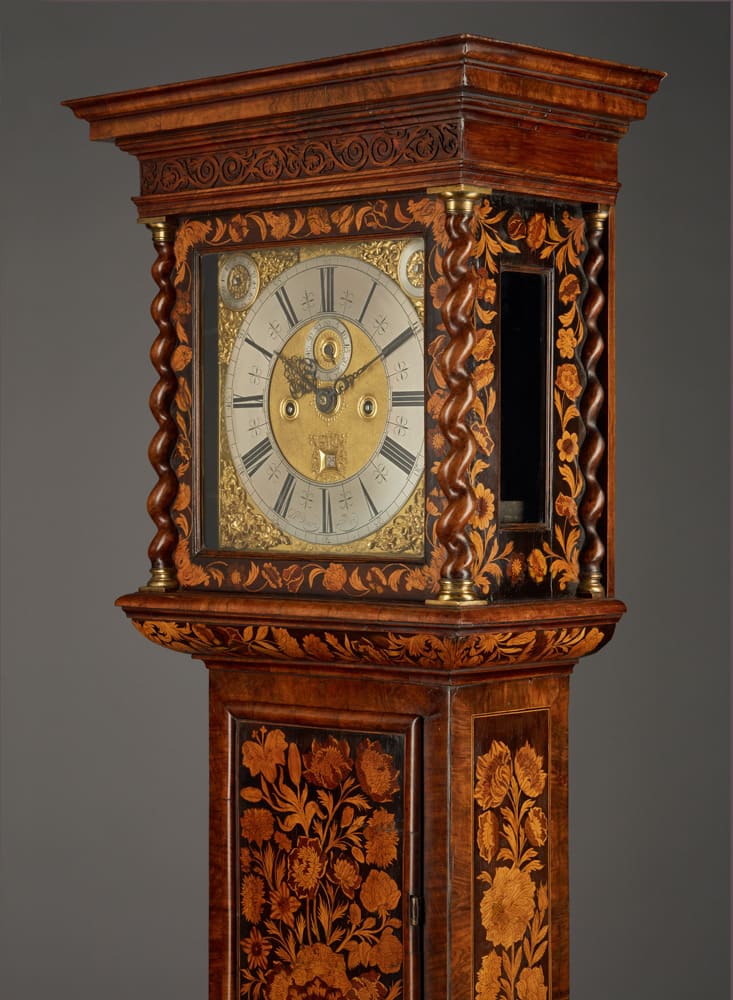 This very large double horizontal bronze sundial is signed Henricus Wynne Londini Fecit. The dial is inscribed and constructed for the latitude of 52° 24’ North and bears the arms and motto of the Cornwallis family.
The shadow from the angled face of the gnomon is used against the outer time
ring of hours and minutes to enable an observer to directly read the local solar time. This then requires correcting by the Equation of Time (the difference between a sundial when compared to the average time) to set a clock to the correct GMT mean time.
Where the shadow of the vertical face of the gnomon intersects the present time line on the inscribed graticule, the intersection can then be used to read the position of sun in the Zodiac, times of sunrise and sunset, and other astronomical data. 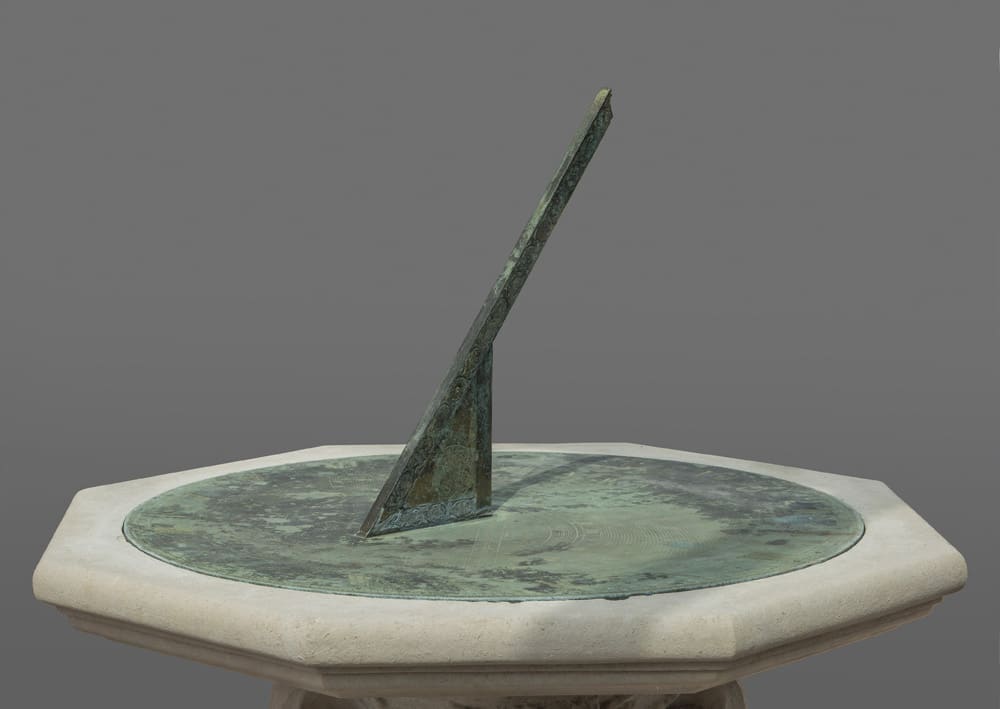 Jonathan Puller (1662-1707) was apprenticed to Nicholas Coxeter at the age of 14. He became free of the Clockmakers’ Company aged 21 and later trained eight apprentices of his own. He was Assistant to the Clockmakers’ Company in 1701.
This miniature full grande sonnerie table clock shows the extraordinary skill and manufacturing ability of a clockmaker at the height of his powers in the 1690s. The clock has two S/NS levers to switch off the quarters and/or the grande sonnerie for use in a bedroom at night. It is the smallest full grande sonnerie pendulum clock known. At the time of its production Jonathan was probably working in the Red Lion Court on Fleet Street.
Fromanteel, the three Knibbs and Tompion are the more famous contemporaries of Jonathan Puller, but this miniature clockmaking marvel has no comparable mechanism made by any of them. 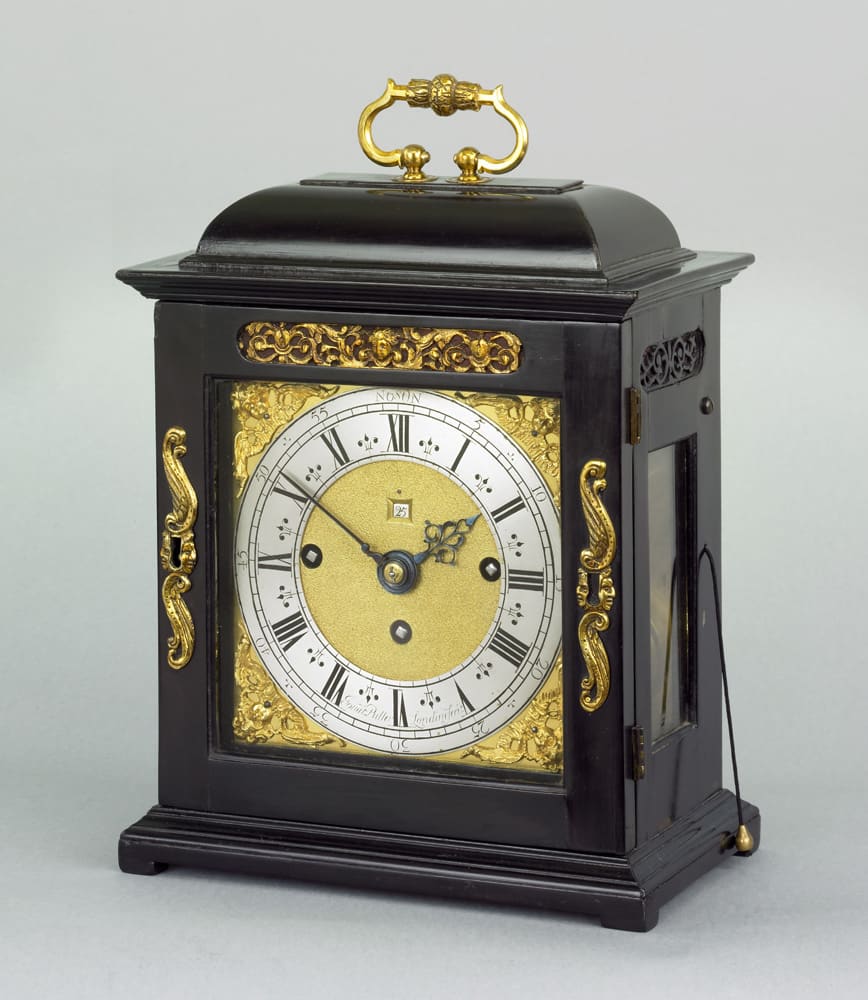 The Queen Mary’s Turtle-shell Tompion is housed in an oak carcass case with Boulle work in red turtle-shell with pewter inlay and the brass break arch door top continued down with two inlaid brass scrolls. The whole style of the case is from the design of Daniel Marot and Louis XIV’s court at Versailles. The case then had to be modified to take the Tompion movement with a recess cut into the back of the door for the hidden pendulum regulation dial at the top of the clock dialplate. The pendulum swing also requires slots cut on each side of the backdoor. All these hidden adaptations give a slightly crude and unfinished look to a beautiful little bedside clock.
Tompion billed the Queen £40:00:0d for the clock on an itemised account dated 16th August 1693 – I doubt he was paid promptly! 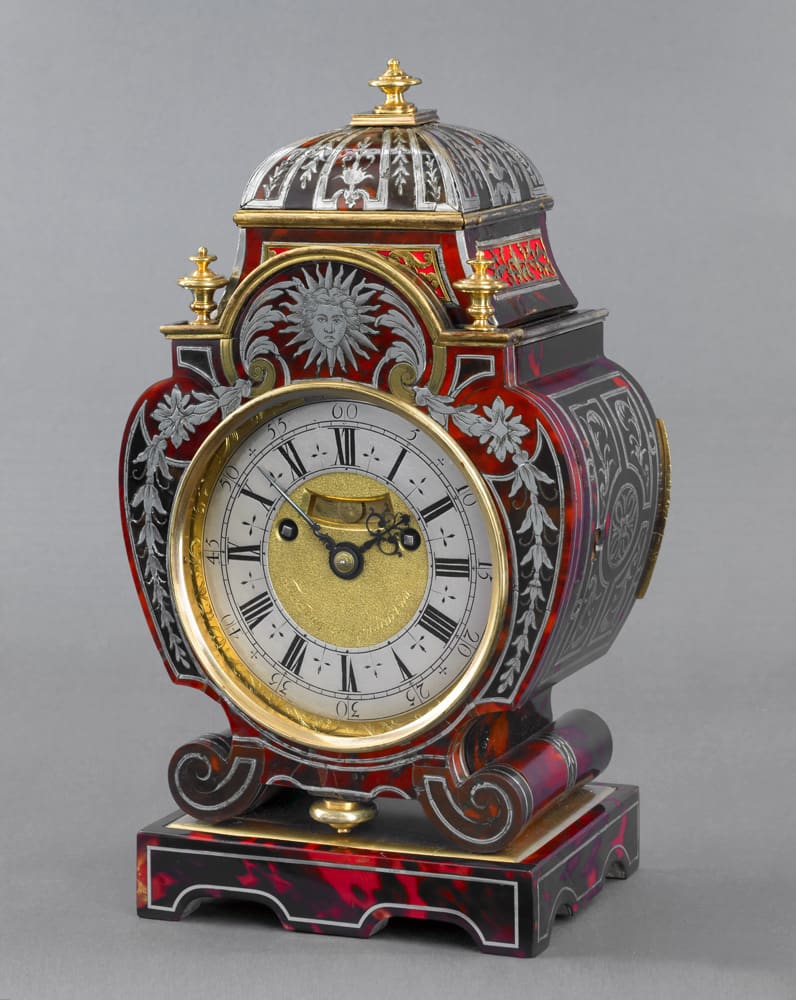 The Selby Lowndes Tompion No.217.

King William III may have commissioned this clock, when he fought the Battle of the Boyne on the 1st July 1690, Catholic King James II fled the field, leaving victory to the Protestants. The gilt brass finial of a Roman general may be an allegory for victory.
The case was probably designed for Tompion by Daniel Marot, King Louis XIV’s Huguenot court designer who, in 1685, slipped away from Versailles after the Revocation of the Edict of Nantes (that had given, in 1598, French Protestants freedom from persecution by the Catholic state). Following its Revocation, Marot first sought refuge in the Netherlands where he began working for William of Orange, whom he later followed to England after William and Mary were crowned joint monarchs. 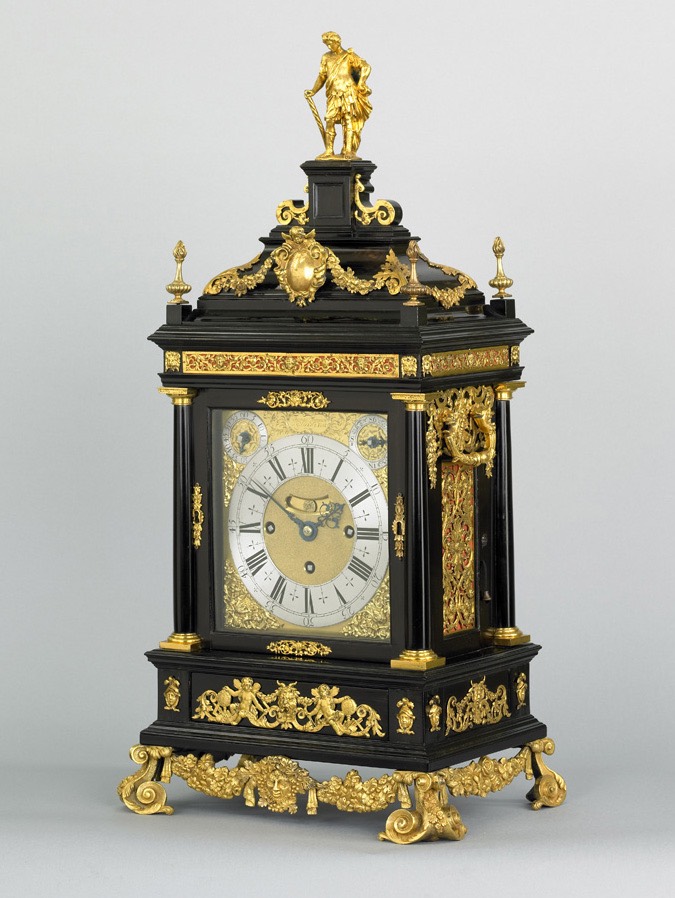 This magnificent clock is wound only once a year yet strikes every hour; 156 strikes a day, 58,500 a year plus 10 days spare from a seven wheel train and 22Kg weights!
The case and even the columns are covered in première partie Boulle work; the floral and detailed pattern in metals with the background in turtle-shell. The carcass of the clockcase is oak and unusually constructed. The backboard is fixed with small wooden dowels and glued in place. The cross members are all dovetailed, then locked by a taper wedge before gluing. These are all German features. This opens the likelihood that Father Time his victims and the Satyrs are German Baroque not French Boulle! Compare Exhibit 107.

Horizontal table clocks were a form of clock more associated with the early days of horology, using an impulsed balance wheel. With the introduction of the pendulum, the need for a reasonable length of pendulum rod to slow down the period of oscillation turned most makers attention away from this oeuvre.
It was more natural to have the movement plates and the swing of the pendulum in a vertical plane. Here Daniel has produced another miniature masterpiece of design and perfection of manufacture, bringing the old form back into prominence.
With a double lock for the pendulum and an alarm together with a pull quarter repeat to give the time if you woke in the night, what more could a traveller wish for? 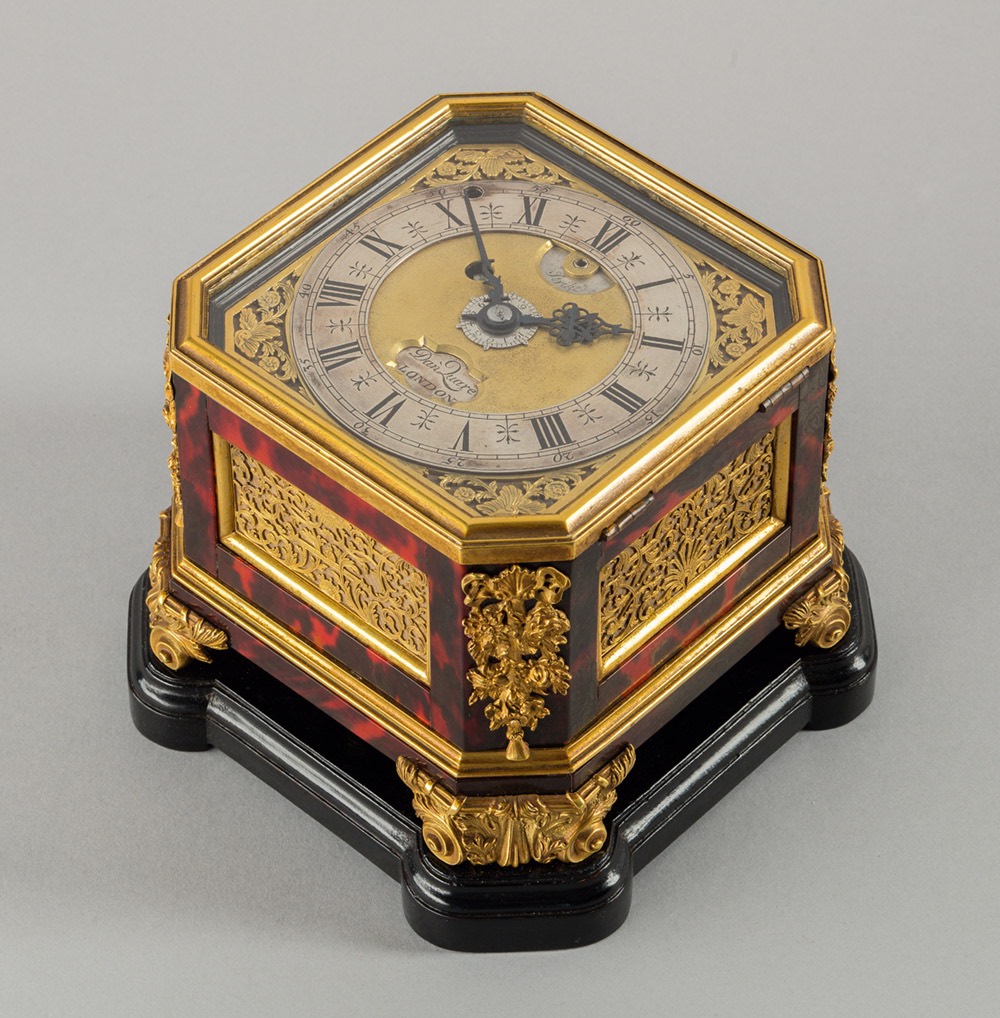